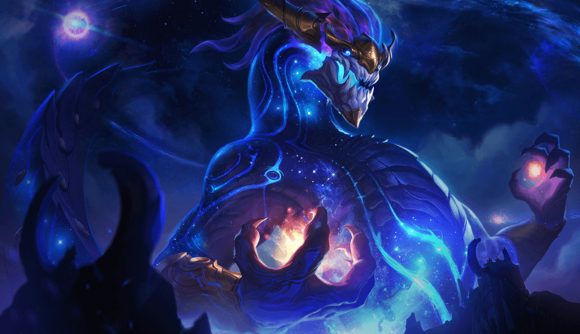 Riot has officially lifted the veil on the Aurelion Sol rework, and as many players have been suspecting, the League of Legends champion isn’t getting a traditional VGU. LoL’s bigger champion reworks have tended to take the form of ‘visual and gameplay updates’, but Aurelion Sol is in for something new: a comprehensive gameplay update, or CGU.

The CGU means that Aurelion Sol’s kit is getting completely rewritten from the ground up, but he’s keeping most of his current visual identity. As the devs explain in the latest champion roadmap, Aurelion Sol’s playrate has been abysmal for ages, but champion surveys paint him as one of the best-rendered characters in the game – so he’s keeping his “model, theme, and narrative”, but getting a whole new set of mechanics.

“Our goal is to give the space puppy an entirely new kit with massive changes similar to VGUs like Urgot’s or Sion’s, while making sure that it’s still thematically cohesive with who he already is,” the devs say. “We want to emphasise his dragon fantasy, as we don’t think he currently delivers on that part of his persona very well. We also think our new take on his star forging gameplay will be both spectacular to see and more intuitive to play. While things can always change, we’re currently targeting some time at the end of the year to get a new and improved Star Dragon in your hands.”

After the new Aurelion Sol lands (probably) at the end of the year, Riot intends to look at feedback on the CGU to see if it would work well for other champs.

Keep an eye of the League of Legends 2022 patch schedule for more as we get closer to the game’s first CGU.