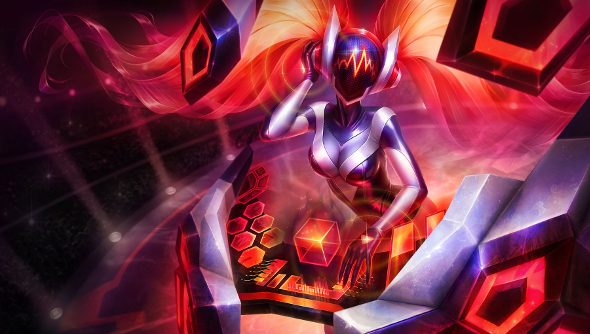 Yesterday, Riot unveiled a new skin for League of Legends’ Sona, and it’s all sorts of crazy. The DJ Sona skin doesn’t just change the appearance of the support summoner, it adds new animations, effects and even music. DJ Sona is a one-woman party.

DJ Sona, using her magical portable turntable, can transform the music of League of Legends, spinning three evolving songs that feature music from lots of artists that I confess I’ve never heard off because I’m not very cool. And Crystal Method.

Each of the evolving tracks also transforms Sona herself, as well as her turntable and even how her abilities look. It’s more like three skins in one.

The music isn’t just for Sona, either. Players on her team can tune in, switching the music from the official League of Legends audio to Sona’s beats.

All this means that DJ Sona isn’t cheap. You’ll need to shell out 3250 Riot Points when it appears in the store, but it’s certainly something a bit special. And you can give your ears and early taste of what to expect by listening to her three tracks below.