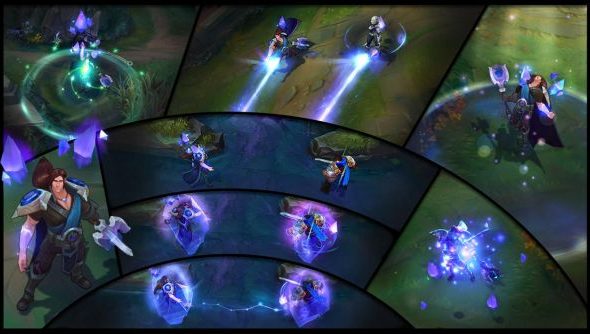 Update 5 Apr, 2016: Taric, one of LoL’s oldest champions, is finally receiving his rework, turning him into a tanky support capable of making his entire team invulnerable.

After much of the usual teasing, Riot have revealed the extent of their next big champion update – and it’s happening to Taric. Previously a fairly simple hero capable of stunning, healing and not a lot else, played as a boring support, he now links closely with an ally to mirror his abilities in two locations, heals, can output damage at twice the speed thanks to his passive and, oh, make his whole team immune to damage.

Get ready for a whole new world with our picks of the best League of Legends champions for beginners.

You can read the exact details of what’s happening, as well as see his abilities in action, over on the official page. He’s also received a big lore injection for people into that, including a hefty new bio on top of yesterday’s comic. It’s all a part of the Mount Targon storyline that’s been running for a few months.

As for how he’ll play, we’ll get to find out tomorrow when the latest patch, 6.7, goes live and Taric moves on to the public beta environment to be tested for 6.8. There’ll be videos, impressions and probably some nerfs before he’s finally released in a few weeks. As for what’s happening tomorrow, check our League of Legends Patch 6.7 roundup for a look at that.

Update 4 Apr, 2016:A comic called the Ascent has appeared, along with some very pretty pictures of the new Taric

The rework for Taric has officially begun with the introduction of his new story in a twelve panel comic about climbing mount Targon. It shows the first part of his path towards redemption. From what isn’t exactly clear, but Taric clearly spent some time running away from problems (and enemies) in the past and the ghosts of a snowy mountain plus a mysterious bearded dude with an axe are none too pleased about it.

You can read the full thing over on Riot’s official mini-site. It’s very well drawn and loads a panel each time you click, plus has some lovely swirling snow effects and sounds to make you feel cold. Cheers Riot, like Scotland wasn’t enough.

You can also see a preview of his new splash art over on Twitter, in all its HD glory. One of the Champion update guys, Ququroon, also revealed that the skin splash arts would be shown today, and are equally good. Meanwhile, confirmation came on the forumsthat his new weapon is a three-pronged mace.

Original story 1 Apr, 2016:Nothing is certain in the world of Riot Games content teasers, but their latest for League of Legends, Downfall, would seem to be obvious. Gem-studded, shield-wielding, fantasy-fulfilling Taric has been on the ‘to-do’ list for a long while as far as updating the game’s earliest characters go. This video showing what seems to be one of his shinies dropping into the snow suggests the Taric rework that was promised as an upcoming project is about ready for release.

The video, which comes with the description “To ascend the Mountain, I had to let go…”, is embedded below.

Frozen memes aside, everyone’s generally agreed that this is our boy. Taric’s one of the oldest characters still in the game, introduced back in 2009 when League was in its pre-launch stage. He’s been patched and played with as much as anyone else, but remains a relic of the older age of design before the game became the competitive juggernaut it is today.

As for what they might actually be doing to him, that’s anyone’s guess, though the mountain referred to is likely Mount Targon, a significant place in League’s ever-expanding and more than a little convoluted lore. I’ll not pretend to be an expert, but previous hints have been that his connection to the mountain is more personal and he is a part of it himself. I did say convoluted, didn’t I?

Of course, we’ve been baited before. Riot aren’t one for disappointing their community, but they do love a good tease. It could turn out to be something else entirely but, let’s be honest, can anyone look at that splash art above and say he isn’t due an update? Come on now.