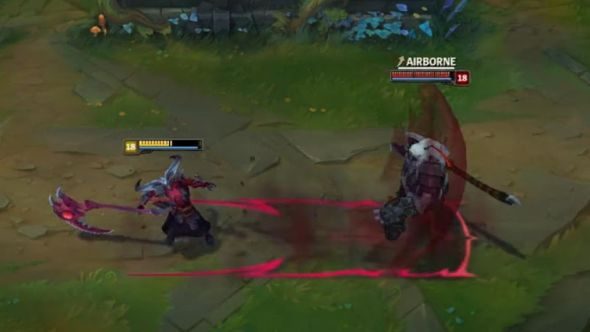 Update: Riot have now officially lifted the lid on Kayn, the Shadow Reaper, a master of dark magic. Wielding a malevolent scythe, Shieda Kayn has to bend the weapon to his will or be completely consumed by its evil power.

In practise, this means that Kayn either wields the weapon or is taken over by Rhaast, the darkin within it. “Kayn hones his shadow skills by hunting ranged opponents, while Rhaast fuels his bloodlust by going toe-to-toe with melee enemies,” the official blurb reads. “If Kayn wins the struggle, he ascends to become the shadow assassin. If Rhaast is the victor, the darkin consumes his host and takes center stage.”

Here’s what’s going on with League of Legends patch 7.14.

Basically, he’s the only Champion in LoL that can change class mid-game. Whether you need to go ranged or melee tank, you can switch and change depending on the needs of the battle. Clever timing of this change will be key to effective use.

Check out the video above.

Original: The next League of Legends champion has leaked, and he’s quite special. Based on a quickly-removed video it’s two characters inhabiting one body – one a “shadow assassin” named Kayn, the other an inhabitant of his demonic scythe named Rhaast. Both want to be in full control. You can see a mirror of the video above.

As sleuthed by fansite Surrender at 20, the gameplay of the new champion appears to focus on switching between these two personas based on actions taken in-game, as well as a third form when the two are in balance.

Each has different abilities, as seen on the ability bar, and even a different portrait. While there are likely similarities between each form, restricting switches to only while back at base would suggest there are significant changes. It doesn’t appear to be a permanent decision due to the buff icons and cooldown displayed on the transition button, but that’s possible too.

We’re likely to find out more in the very near future as Riot usually do full teasers on Tuesday evenings before the new patch hits PBE. This Reddit thread has further speculation that killing enemy champions is what allows for the transformation, creating a snowball effect. Interestingly, it doesn’t match up with the mage or tank predictions made last time Riot teased something.