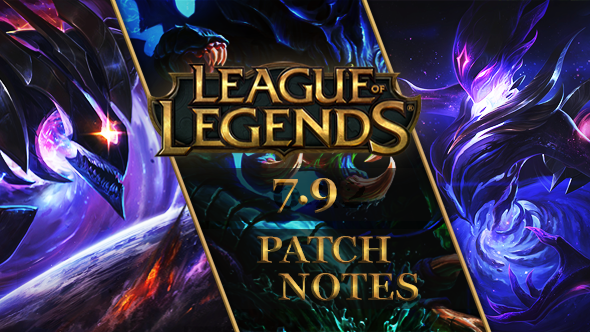 League of Legends’ new patch is 7.9, the midseason 2017 patch. It introduces the tank update, reworking Maokai, Sejuani and Zac, as well as a host of balance and bug fixes. Plus: new Dark Star skins. Have a look below for all the information we’ve got.

Patch 7.9 will release early on May 3. Release time is 3am PT for NA, 5am BST for EUW and 3am CET for EUNE. Keep an eye on the server maintenance page for the latest updates.

Riot have summarised much of it in their midseason spotlight: The following champions have been significantly reworked as part of a larger update to the tanks class. We’ve laid them out like new champions, as they essentially are, with full descriptions of all of their abilities. Changes to other champions are further down the page.

Here’s how all that looks together:

Here’s his new voice over:

And meanwhile, in a magical land:

Here’s how all that looks:

And some updated splash arts:

Kinda needs to be seen to be believed:

No further champion changes yet, but wait for it.

Huge item changes in 7.9, including two totally new ones.

Besides this, a huge number of items are being changed in patch 6.9. Starting support items are having quests added to make their play more interesting. Details on this available on the forums.

On quests, each line of items are getting a different quest. Here’s the deets:

The biggest girl on the Rift is getting significant reworks with the midseason update, changing Biggles Crabson from a mostly ignored roadblock on the way to Baron to a lane-pushing, Heroes of the Storm-style PvE objective that will almost certainly be in big demand. Here’s the highlights:

While pushing a lane, she’s meant to take down multiple turrets if protected, but be easy to beat with a coordinated team if she’s going solo. Expect your team to never protect or defend against her. Obviously. As with most skin packs these days, the Dark Stars come with their own ward. Here’s a vid:

It’ll be 640 RP or likely be available as part of a pack.

There’s also talk of a game mode – we’ve got all the details in our dedicated post. Further explanations straight from Riot here.

The above asset, along with a couple others containing the shotgun-wielding pseudo-cowboy and his favourite puffer, were added during this PBE cycle. This follows a mysterious tweet from Riot co-founder Marc ‘Tryndamere’ Merrillcontaining the grizzly one’s cigared visage. Presumably, it’s making a comeback.

Each patch has its own login screen with unique music. They’re always fairly excellent, and 7.9’s is no exception. It’s based around the new pair of Dark Star skins and is especially spooky.

Riot are doing a pass on the UI, especially as it relates to the utility contributions of teams – putting out stuns, giving vision, killing structures, tanking damage, etc. This is all laid out, along with some other changes, in this forum post.

A new section for our patch posts this – we’ll be dropping in any relevant thoughts from various folks at Riot. Of note this go round is Andrei ‘Meddler’ Van Roon withthoughtson where they’ll be focusing balance efforts and what they’ll be keeping an eye on from this patch. Of note:

These aren’t rolling out in 7.9, but have been added to the PBE. Via this Red post, Riot are essentially implementing event-based rewards in-game, rather than having to claim via other websites or them checking everything a few weeks later and auto-adding anything earned. It will be revealed properly “in the coming weeks” but [email protected] have a preview of the strings involved.

That’s League of Legends patch 7.9. We’ll update as and when we get more info, or we’ll see you for patch 7.10 in the very near future. Let us know below if there’s any vital info we missed!