Do you have what it takes to be a League of Legends pro? Thanks to a new Australian reality series, now’s your chance to find out.

It’s called The Next Gamer, and in a fairly typical take on the reality show formula, it’ll winnow 40 contestants down to a single winner. That winner will take 10,000 Australian dollars in prize money and a six-month contract with a pro League of Legends team. The show will be broadcast on YouTube.

The initial 40 players will “battle it out online” over five “action-packed” days to win one of ten spots in a house in Sydney. A week of further tasks will then test their “mental fortitude, physical fitness, and teamwork,” and narrow the field to a final team of five.

That team will then face one from the Oceanic Pro League in a live finale, where the winner will be decided. 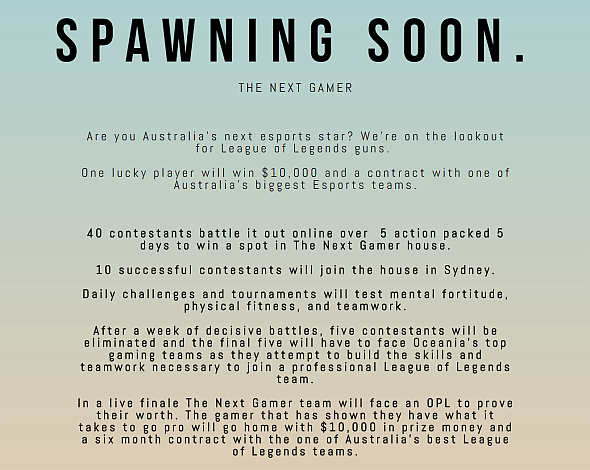 This isn’t the first esports reality show – CS:GO, Halo 5, and even Gears of War have also had their own. Applications and further details were live on this website, but at time of writing, seem to have disappeared. Sorry about that. We had a look for more details, and found a Facebook page, Twitter feed, Twitch, and YouTube channel, none of which have been used. Hopefully they’ll all get up and running soon and you’ve still got a chance to amaze the Internet with your jungling skills.