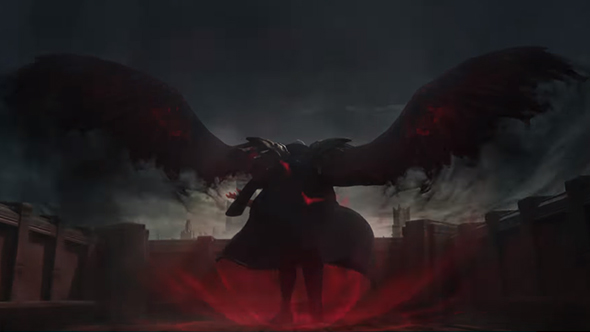 League of Legends’ Swain – the Noxian Grand General – has been due for a rework for some time, and it looks like those changes are coming very soon. Riot have put together a teaser for the champion’s new look, with a sick military jacket, demon hand, and massive crow wings. Swain promises Noxus will rise again.

A rework for Swain has been teased for ages. Back in July last year, Riot mentioned this was in the works, saying “his visuals haven’t held up very well over time.” They said “we’ll be updating his visuals to better match his theme as the leader of Noxus, as well as doing a major overhaul on his gameplay. We want to keep the ‘essence’ of Swain intact, even though we will be completely rebuilding his entire kit from scratch.”

Based on previous champ reveals, we could be seeing his new kit as soon as next week, with the in-game changes likely coming either as part of patch 8.3 or 8.4. A comment from Riot earlier this month mentioned Swain’s update would be coming “fairly soon.”

Either way, you won’t be waiting much longer to see Swain take on a look and feel more in keeping with his backstory as a master tactician.