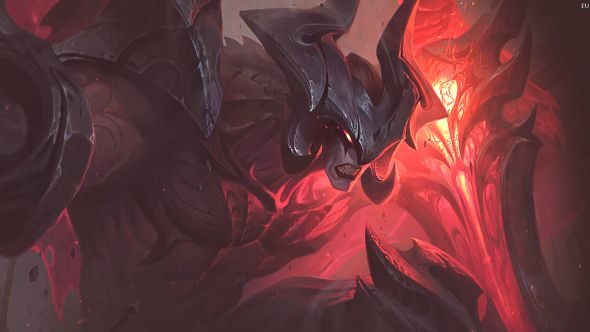 Update, June 12: We now know all of Aatrox’s new abilities so you can see them below.

League of Legends developer Riot Games has just confirmed the long awaited rework of Aatrox, The Darkin Blade. The fighter, who was first released way back in 2013, has seen a bizarrely low number of balance changes over the past five years.

This ahs prompted some players to worry about how the champion is to play, especially when compared to other characters – many think he is overdue for some quality of life improvements.

Fortunately, it seems Riot has been taking notes as Aatrox’s full reveal has just gone live, and it should answer some long-running concerns that players have had with the champion.

Which is the best MOBA on PC?

Below, you can take your first look at all of the champion’s reworked abilities. There’s also a look at some new lore, which seems to link Aatrox’s Darkin backstory with that of Kayn. Intrigued? Just wait until you watch the new trailers below. There is much to be discussed.

You can check out how that all looks in the video below:

The original teaser trailer, which you can watch below, opens to footage of a battlefield, with a soldier’s eyes turning to Aatrox’s sword, before it’s pulled back to the champion – hinting at one of his new abilities.

Then Aatrox appears, lighting up the fog of war as he goes to town on some unwitting enemies. The trailer closes on a shot of Aatrox standing over the soldier, before turning his gaze downwards.

The rework has nothing to do with the League of Legends Wolf and Lion tease, which was released over the weekend. That was revealed to be a teaser for new Legendary skins for Darius and Garen. Expect to see Aatrox appear in the next League of Legends patch.