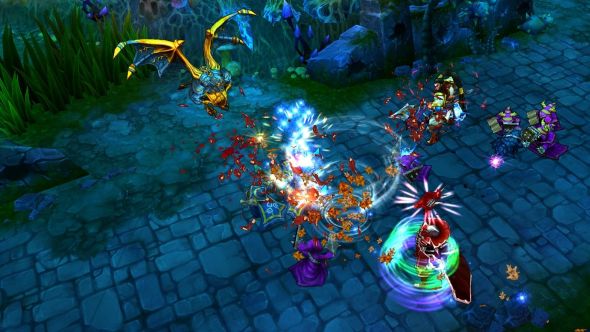 League of Legends eSports are coming to some of America’s most prestigious athletic universities. The Big Ten Network, a Fox-owned TV network dedicated to sports broadcasting from America’s ‘Big Ten’ universities – of which there are 14, obviously – have partnered with Riot Games to found a new season-long LoL championship.

Follow our own efforts to crack the cutthroat world of eSports: can pro coaching turn a LoL noob into a champion?

According to ESPN, 12 of the 14 Big Ten schools will compete in the league, with Nebraska and Penn State missing out on the fun. The finals will take place at Riot’s facilities in Los Angeles, but until then players won’t have to travel and could play from their dorms.

“As a content provider, we have obviously seen the popularity in eSports grow,” says Erin Harvego, BTN’s vice president of marketing. “Given the demographic that watches, perhaps this could reach a younger viewer who we haven’t reached before.”

Six players on 12 teams equals 72, each of whom will receive $5,000 from Riot in scholarship money to go toward academic expenses. Michael Sherman, head of Riot’s collegiate League of Legends division, predicts even more funding could be available once schools get a taste of the exposure that’s available.

“We’ve seen a lot more interest from senior-level people at the universities,” says Sherman. “We could see a domino effect, where one school offers a scholarship and the others follow. We think a lot of conference networks will take a look at this opportunity as well.”

Thus eSports could be a ticket to a quality education for those who otherwise couldn’t afford it, not to mention a potent premise for the next great underdog sports movie. Picture it: young tearaway from broken home wins free ride to rich school after impressing hard-bitten talent scout who just happens to stop by his grimy local internet cafe. He’s immediately shunned by the jock captain of the varsity LoL team, but falls for his open-minded girlfriend, before contracting WASD-crippling carpal tunnel before the big game… and so on, and so on.

Anyway, the league will start on January 30, and be broadcast both on BTN2Go and on lolesports. The BTN champions will go on to compete in the League of Legends College Championship in late March.