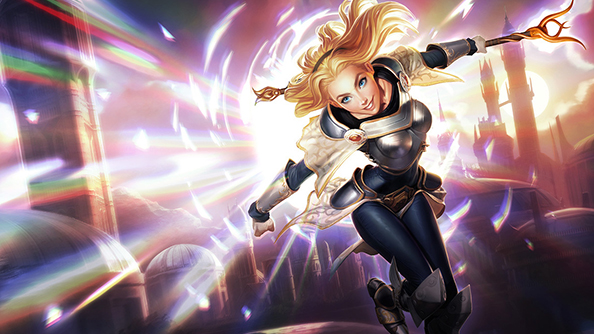 Update May 20, 2017: Riot have completed their animation showcase, with videos about Darius and Lux.

Bringing its animation showcase to its conclusion, Riot have released the final two videos in this mini-series. The penultimate video is dedicated to the warrior Darius, showing him on a stroll through the Freljord. Unlike Zed’s violent display, this animation test shows was to show how terrifying the Noxian warlord could be, without the use of his combat abilities.

It was also to test to see if Riot’s animators could insert a 3D character effectively into an environment with mutliple layers. Based on the shot showing wolves in both the foreground, middle ground and background, I think this test was a success.

The final animation test (shown at the top of the page) is an incredibly detailed pencil test, showing Lux hiding away her power before riding off into battle. The sheer amount of work that went into this animation is remarkable, as each frame is hand-drawn instead of motion tweened.

By all accounts, this animation showcase has been a big success and let’s hope Riot does another one in the future.

Update May 17, 2017: Riot have released their second animation workshop, this time about the shadowy ninja Zed.

Riot are planning to release another video tomorrow, featuring the warlord Darius taking on some hungry wolves in the Freljord, followed by a final video on Friday.

In the blog announcing the workshop, Riot explain that it’ll be a chance to see some short animations that they’ve made internally to help various aspects of the development process. The first, for instance, was “developed to test a new technical pipeline, but transformed into a character study in the process.”

The character concerned is the bounty hunter Miss Fortune. It shows her drinking pensively in a bar, recalling her latest fight, and reflecting on the concept of mercy (or at least, that’s our interpretation). A second video “unlocks” tomorrow, and will feature the assassin Zed.