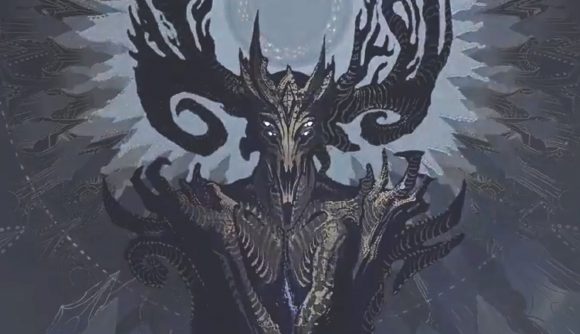 League of Legends is getting pretty spooky with its latest skin teaser.  Halloween might be over, but while most of the game’s champions are settling in to deal with the cold weather, others are using the winter holidays to get back to their more pagan roots.

Yesterday, the game’s official account tweeted a video teasing its latest line of new cosmetics. The video shows a should-padded, antler-headed figure, and is captioned “Can you hear them? The Old Gods are calling and our coven is here to answer.”

The tweet refers to the brand-new ‘Coven’ skin line heading to the game some time during patch 8.23, which is currently available online. If you hadn’t already guessed from the quality of those shoulder-pads, one of the characters receiving a new skin is Lissandra. The Ice Witch replaces her traditional headgear with pagan antlers, and her recall animation features a field of blood-red roses. The other recipient of the new skin is Camille – the blade-legged Steel Shadow is getting her first cosmetic since her launch all the way back in 2016.

While Camille and Lissandra are clearly feeling a bit edgy in the latest patch (you can check out the teaser below) other characters are clearly using the winter weather in more cheerful ways. Patch 8.23 sees some of the anime-style Star Guardians snuggle up for a slumber party, while League of Legends patch 8.24 sees a bunch of Winter Wonder skins head to the Rift, alongside new champion Neeko.

Can you hear them? The Old Gods are calling and our coven is here to answer. pic.twitter.com/oz9P4I0NMu

While patch 8.23 is live now, the new skins are unlikely to arrive for a few days yet, so keep an eye out. Patch 8.24 is currently available on the PBE – the last patch of the year is due to arrive on December 6.