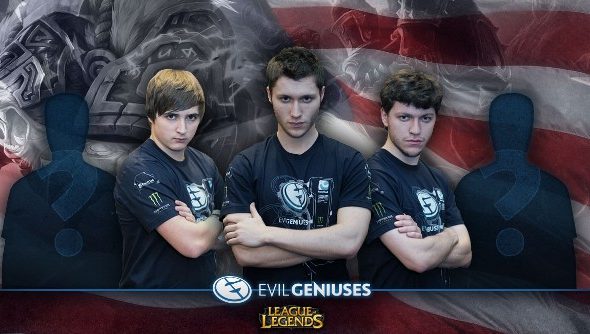 One of the oldest rosters in professional League of Legends, the five-man Evil Geniuses squad of Snoopeh, Froggen, Krepo, Wickd, and Yellowpete, has finally broken up amidst some odd rebranding and an apparent restructuring of the way the Evil Geniuses business works.

The entire story is a little hard to parse, but the bottom line is that Evil Geniuses’ European squad has effectively ceased to to exist. Instead, three of its members are heading to LCS North America to compete as the Evil Geniuses team while two remain in Europe under the EG-affiliated moniker, Alliance.

The confusing part of this story is that Riot’s LCS rules stipulated that no one owner shall have more than a single team in the LCS. That was interpreted to mean that Evil Geniuses, and EG CEO Alex Garfield, would not be able to run both an EG team and their spin-off brand, Alliance. However, to judge from comments made by Riot Esports Associate Manager Chris Hopper, Alex Garfield and Evil Geniuses no longer have the same direct relationship they once did.

Hopper said on Reddit: “Going into the 2014 season, we modified our ownership policy to restrict owners to ‘owning, controlling, or having financial interest in’ only one professional team, regardless of region. Both Alliance and Evil Geniuses are entirely distinct teams with separate owners, general managers, and players.”

As to how that works, the details are a little fuzzy, and Hopper was not willing to divulge who exactly owns both of these teams. However, he did say that, “Alliance is taking over the EG spot in EU, and will face off against Dignitas in Battle of the Atlantic, and is qualified for the EU LCS based on the performance of that squad during the Summer Split. Velocity will be rebranding itself as Evil Geniuses, has picked up Snoopeh, Krepo, and Yellowpete, and will still compete in a Promotion Match against an amateur team to earn their spot in the NA LCS.”

So Velocity eSports, which had a disastrous summer split in NA LCS in which they went 5W-23L, has now been draped in EG branding but ostensibly remains a distinct organization. Alliance now assumes EG’s slot in EU LCS, but may not be under the same management as before. After all, Hopper specifically stated that, “Neither team (i.e. the legal entity that contracts with Riot) is owned or controlled by anyone who is a part of the company that owns the Alliance and Evil Geniuses brands.”

All of which means the question of what Evil Geniuses and Alliance actually are, if not teams, just got a little more difficult to answer. But the fact remains, EG has finally got both its main brands in the LCS, and the former Evil Geniuses League of Legends roster has managed a necessary transition in the most painless, positive fashion possible.

See, Evil Geniuses did not quite live up to expectations last season. While they finished strong, they spent of much of the year floundering and lost confidence in their once unshakeable roster. When captain Stephen “Snoopeh” Ellis benched himself, it was a tacit admission that he was starting to feel like he was holding back the rest of the squad. While this move ultimately didn’t pan out, and Snoopeh came back to a starting position as the team improved and started winning games when he was in the lineup, the team never enjoyed the success it did when it was CLG.EU.

By leaving Mike “Wickd” Petersen and Henrik “Froggen” Hansen in the more competitive LCS division as Alliance, the team’s strongest members are now free to team up with players who might prove more reliably complementary. Meanwhile, Snoopeh, Peter “Yellowpete” Wüppen, and Mitch “Krepo” Voorspoels can extend their careers by bringing their experience, star power, and chemistry to an American LCS division that has proved chronically short of competitive depth. It’s good for both the NA division, and for three veterans who were starting to struggle in Europe.

That’s the theory, anyway. The new Evil Geniuses team still has to qualify for the LCS by playing Velocity’s promotion match against either Quantic Gaming of vVv. With so much experience to call on, the EG squad should be able to win their match and qualify for the spring split but, if they don’t, it would be a rather ignominious beginning for some of the most renowned professionals in Western League of Legends.