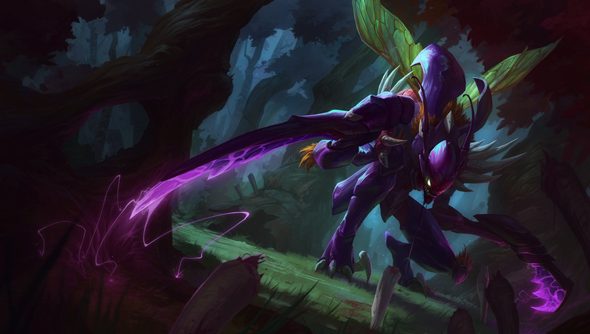 Kha’Zix, the evolution-heavy alien hunter beast fighting his way into League of Legend’s Summoner’s Rift, has had his abilities detailed in a post by Riot, explaining exactly how the whole idea of battlefield evolution works, as well as giving more than a few details on his expected role in the game, and where he’s most effective.

He’s almostexclusively a jungler, aiming for unseen ganks rather than staying in Lane. His passive, Unseen Threat, gives him bonus damage against targets that can’t see him, and while you can probably work that through the bushes on each lane, it would certainly be more difficult.

He’s got a projectile in Void Spike on his W, as well as a diving ability in Leap on his E, both of which can beaugmented by his ultimate: Void Assault.

‘Taste Their Fear’ is his E ability, a straight damage nuke that does more damage if the target is isolated.

His ultimate is Void Assault, which augments any of his four abilities. Upgrade Taste Their Fear and it will be given extra damage and range, as well as increasing the range of Kha’Zix’s basic attack.

As usual, his ultimate has three levels. But there are four abilities to choose from: the restriction hopefully encouraging build diversity.

Kha’Zix should be coming to the game within the next fortnight, all things willing.

It’s good to see another Jungler coming to League of Legends,even if we only recently had Rengar.