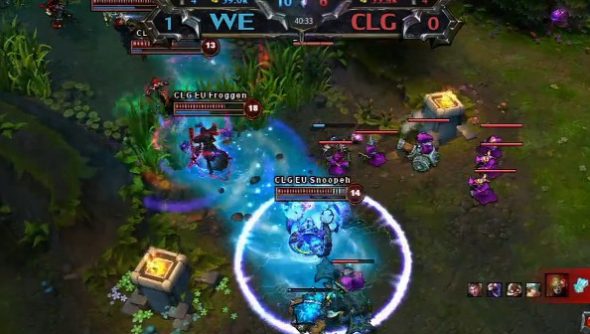 The last quarterfinal match between CLG EU v. World Elite was supposed to be a best of three, but here at 1:30 UK / 8:30 Eastern, with the tournament now three and a half hours behind schedule, connection failures have forced the teams to play their fifth game and second regame.

It is the second time in this series that technical issues at the event have caused full disconnections from the quarterfinal games. The first happened just over ten minutes into Game 2, when World Elite saw a strong start go for naught as the stream froze and the connection at the venue crashed. CLG went into the regame with a new strategy and managed to win a victory to tie the series at 1-1.

But this last failure is the cruelest of all. CLG seemed to be just moments from certain victory after a grueling hour-long match when the connection dropped at the start of the final teamfight. After conferring with Riot officials, both teams went backstage to prepare for a new Game 3.

It’s been a disastrous turn for what was an outstanding tournament, and it will inevitably cast a shadow over ultimate winner of this otherwise outstandingseries. You could make a case that the first regame allowed CLG to save themselves from a failing strategy, and the second has almost undeniably rescued WE from defeat.

Even more worrying is that this has already happened twice today, and there are two more semifinals yet to be played: Moscow 5 v. Taipei Assassins, and Azubu Frost v. the eventual winner of this match.

No word on what caused the outages, but we’ll update the story when we have more.

UPDATE (9:20 Eastern):The stream just died and apparently they lost the game as well. This situation just gets more and more unfortunate for all involved.

UPDATE (11:30 Eastern):Riot have announced the remainder of the matches are postponed. A statement on the League of Legends stream said,“The completion of the playoffs will take place offsite in the next couple of days and will beavailablevia live stream.” Updates will follow on the game’swebsite, and we’ll pass the news along as soon as we have it.