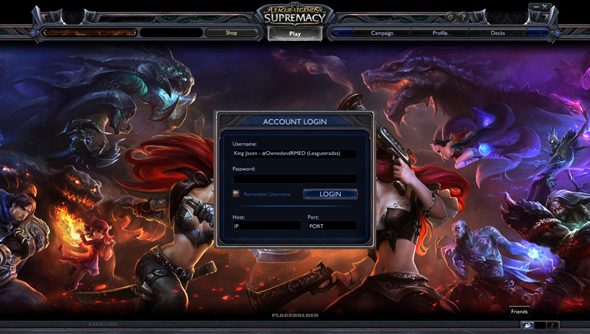 Riot president Marc Merrill wasn’t himself last night. A hacker relieved him of his Twitter account, and proceeded to post pictures of “one of the many prototypes” Riot have experimented with – a digital card game named League of Legends: Supremacy.

The hacker behind the elaborate codename ‘Jason’ posted an image of the placeholder login screen you can see above, which features links to a Campaign mode, player profile page and ‘Decks’ screen – as well as a Shop, the means by which Riot would presumably break even in tried and tested free-to-play fashion.

The name Supremacy will be familiar to some: it was first registered by Riot last year. Speculation at the time led some to expect a new mode within LoL, but our new friend Jason claims to have the server and client source for a “standalone game”.

“Did I mention this game was fully completed, but never released?”, said an increasingly antagonistic Jason. “Riot doesn’t want you to play this game. Take it up with them.”

He then leaked two imgur galleries’ worth of blank card templates and text icons, the latter of which have since been removed. Apparently drunk on socially-mediated power, Jason threatened to release a 200 MB file of card images, “unless Marc Merrill emails me not to”.

Merrill must have swiftly composed a draft artful enough to talk Jason down, because the hacker soon relinquished control of the account.

This is the real Marc. Account’s back in my hands. Protip: use login verification on Twitter, don’t be me and use a super old password.

“Yup, someone got onto my Twitter account,” wrote Merrill a short while later. “Yup, someone shared some old screens from one of the many prototypes we’ve experimented with.

“We’re always working on a variety of new ideas for League & beyond. Lots of experimentation that may never see the light of day.”

Oh, but please can it, though? I can’t think of another PC developer besides Blizzard better positioned to put together a world-conquering TCG – and the strain this site’s been under for the last few days of Hearthstone beta key giveaways is testament to the demand.

I’m sure a hacker’s conception of a “completed” game differs from Riot’s own exacting standards – so perhaps Supremacy isn’t ditched at all, but still under the hammer?