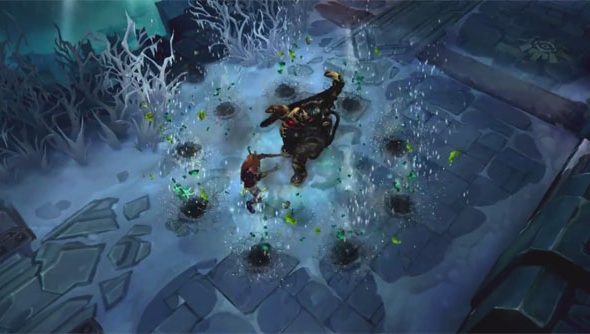 Summoners, as Riot call them, don’t need to be told that an ever-growing roster of champions and a tactical core kept burning by real-life humans ensures League of Legends endless variation. But a handful of maps and just two primary game modes also means it’s perhaps too focused for some of the creative minds that’ve flocked to the Santa Monica studio in recent years.

Showdown is the antidote to that – an experimental mode designed to shake Riot and their players from inertia in a (marginally) less competitive environment. You can play it today.

Showdown is a small scale ‘Who’d win in a fight’ offering that accommodates 1v1 and 2v2 duels on Howling Abyss, LoL’s popular single-lane map. That way, I suppose, players can be expected not to get lost in the search for their (potentially sole) opponent.

Three means of victory await: scoring first blood, or two kills in 2v2; waveclearing your way to 100 creep score; or smashing the enemy turret before yours succumbs to the same fate.

Showdown is the second in a series of original, experimental game modes developed by a small team within Riot over the past few months. The first was One for All, a batshit variant on the usual formula which allowed duplicate champions.

Each of these “short-lived” modes will be cycled regularly – think of the process as a comfortably treacle-like take on Left 4 Dead 2’s Mutations run.

“Cycling new modes will let us work with you guys to create new experiences that would have been difficult to do as permanent game features, and it gives us free reign to go mildly crazy,” said Riot technical game designer Richard ‘Brackhar’ Hough a few months ago. “Also, cycling new modes in and out will allow us to keep these things fresh and focused from a gameplay perspective.”

Showdown will be around until January 2. D’you think you’ll make use of it to settle a few bets over Christmas?