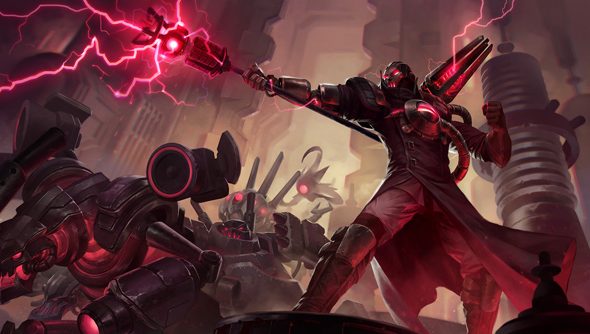 Is it possible that the internet is getting worse? Or is it simply that League of Legends continually fails to stop growing, becoming a larger and larger target? Either way, more than half the DDoS attacks Riot Games have ever witnessed against LoL have occurred in the last two months.

Riot record two to four attacks every day against one or more of their server regions – and each one “significantly” stronger than those they were fighting just a few months ago.

It’s a bleak background to an otherwise successful picture – like suddenly noticing a post-apocalyptic landscape behind Van Gogh’s sunflowers. But while the developers acknowledge they sometimes “lose the fight”, they are “not helpless” – and expect things to get better.

In many ways it’s a similar battle to that portrayed by Gabe Newell of Counter-Strike’s anti-cheat measures.

Riot are working long hours to counter the most recent wave of attacks – “so big that the ISPs and Telecom’s that service League of Legends have not been able to keep their Internet circuits up” – and are making daily progress. They expect things to “get better soon”. But they know that as soon as one defence is assembled, new methods are devised to seep through the cracks in the palisades.

“About half of the equipment investment in League of Legends is network gear with a large part of that in place to just handle the ongoing rise in frequency and size of DDoS attacks,” said Ron Williams, Riot’s VP of Network Operations.

Riot will invest even more heavily, says Williams, and are working closely with all the providers and services related to their servers to help fortify any possible weak points.

“Sometimes we lose the fight and that sucks because it means players like you feel the pain too. It also means that instead of our engineers building cool stuff for players we have to fight off bad stuff from hackers, so players lose again,” wrote Williams.

“It’s frustrating, but the reality of large scale Internet services, so we have to get smarter and better to make sure players around the world can have fun when you want to have fun.”

In short: it sucks, but Riot are on it – perpetually. Have any of you lot noticed terrible lag or login issues in LoL over the last two weeks?