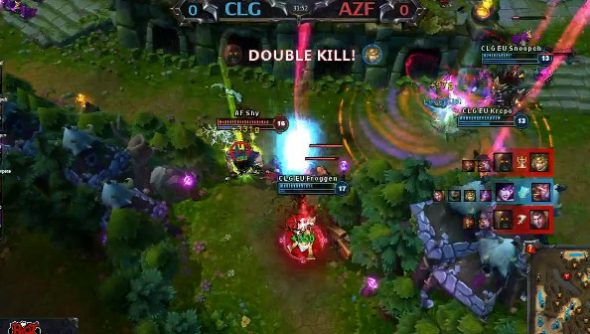 One of the uglier stories to emerge from the troubled League of Legends playoffs at LA Live last weekend was the alleged cheating by several teams and players. In particular, many spectators at the event believed they had seen competitors glance at the spectator minimaps during their games, which would have conferred an advantage because the specator minipals  showed both teams’ positions.

Riot have looked into the various charges, and while it’s now clear that cheating was not as serious as was feared, they definitely found that several players cheated by looking at the minimap, and one clear case where that was used to gain an advantage. In a statement released last night on the LoL forums, Riot VP of eSports Dustin Beck explained what Riot uncovered, and how they would handle it.

“We take this stuff seriously,” he wrote. “Our rules on sportsmanlike conduct are clearly communicated to competitors, and our decisions here are based on those rules. More importantly, this sort of behavior shouldn’t have been possible in the first place, and we recognize that and have taken steps to ensure it doesn’t happen in the future.”

In most cases, while Riot concede that players on World Elite, Invictus Gaming, and Team SoloMid, looked at the spectator screens, they found that the actions conferred no advantage in the game. In those cases, Riot have issued the offending players warnings for unsportsmanlike conduct.

The main case, of course, involved Azubu Frost’s detection of TSM’s level 1 gank attempt in the top lane when one of the players looked at the minimap. This is, not surprisingly, the one with the most serious consequences.

“Based on our investigation, the Azubu Frost incident is the only one where we determined there to be tangible impact – we believe other members of AzF modified their gameplay (level 1 ping and Jayce brush check) based upon the information gained,” Beck wrote. “We don’t believe, however, that these actions decided the winner of the game.”

Riot have levied a $30,000 penalty for unsportsmanlike conduct on Azubu Frost. The proceeds will go to charity.