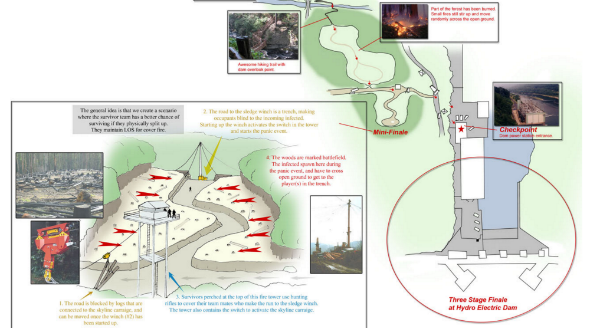 Developers of the original Left 4 Dead Turtle Rock Studios have released an unfinished campaign scrapped before the game’s 2008 release as an add-on.

The Dam It campaign (not to be confused with a single-map mod of the same name released by Tom Baldry in 2009) is a multi-map storyline taking the four players from a crashed C-130 plane on an airfield to a hydro-electric dam.

The frankly massive route goes through fuel storage buildings (which were supposed to trigger panic events when a fire alarm goes off if any fire-based weapons are used), an apple orchard and graveyard featuring crawling half-zombies, a ravine, covered bridge and campground before two huge finale events at the dam and a clearing in a burning forest.

The mini-finale was meant to buck the trend of the game’s other “hold out until salvation’s arrival” wave clearance sections by forcing you to split up, rather than group together, and maintain line-of-sight for cover fire.

Players would need to begin a winch at the top of a winding forest clearing to move logs out of their onward path, however this would trigger the horde and only players in a nearby watch tower would be able to cover their friend from distance with hunting rifles.

The add-on isn’t too hard to get working but is apparently only in a “grey box” stage of development, so certain events such as the fuel storage building fire alarm aren’t fully implemented, so if you fancy seeing what could have been for L4D then grab the download here.

Turtle Rock Studios have had a bit of time to spare recently since 2K announced they were no longer working on Evolve after they effectively canned the ailing monster-hunting multiplayer’s future support. Glad they’ve decided to stay busy with their older successes.