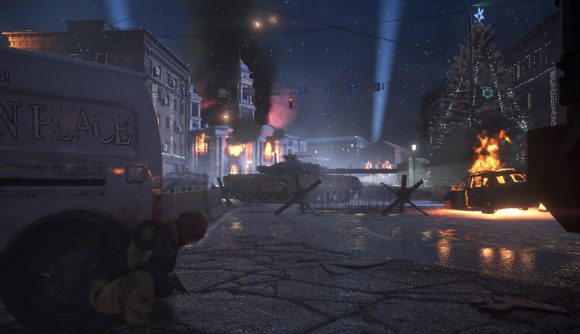 Left Alive stars three principal characters, each of which is trapped in a city as an invading army lays siege. The goal for each of them is to escape the city alive, and though they’ll take different paths to get there, nobody has special abilities to help them along. They’re all just people, and as director Toshifumi Nabeshima says, nobody has superpowers – it’s all about ordinary people fighting for survival.

Each character has their own background, and though that doesn’t change their in-game capabilities, it does influence what kinds of situations they’ll find themselves in over the course of the story. One character is a young soldier, and he’ll more frequently find himself in combat situations – and more often be able to commandeer Wanzer mechs for his own use. Another, female character is slightly more prone to stealth and crafting solutions.

Even with those vague directions, you’ve got plenty of choice in how you approach each group of enemies. If you’ve saved up a bunch of ammo, that could mean fighting them directly. More likely, you’ll be crafting some makeshift weapons and distractions and opting for a subtler approach.

Each stage is self-contained – not part of a larger open world. You’ll swap between characters as you move from one level to the next, seeing everyone’s perspective over the course of the single day in which the game takes place. Everyone starts in a different place, but the characters occasionally meet and the storylines intertwine. Occasionally, you’ll be heading back through previously-explored areas with different characters in new situations.

Nobody levels up over the course of the game, either – your starting gameplay abilities are more or less what you’ve got. There’s some exception, since as things escalate toward the end of the game you’ll find more advanced items to craft and fancier weapons dropped by enemies. But it’s still about scrounging what you can from the environment.

It’s been a long time since we hear much about the game, and though it’s not the turn-based strategy sequel Front Mission fans are likely looking for, it’s certainly developing its own personality. The Left Alive release date is still up in the air, but you can follow that link for more details on what we know so far.