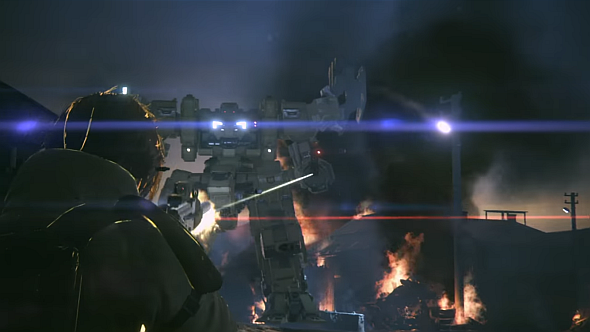 One of the most exciting announcements in the build-up to Tokyo Game Show was Left Alive, a new survival shooter by Square Enix. With the show now underway, it’s just got a new trailer, which gives us a look at one of its three rotating protagonists, a hint at its themes, and a brief flash of gameplay.

Related: here’s everything we know about Left Alive.

The trailer begins with an epigraph from Dostoyevsky’s The Brothers Karamazov: “God and the devil are fighting there and the battlefield is the heart of man.” Further text later in the trailer asks “has humanity learned nothing?” and “are they to live, or let live?”

To some extent, these questions reflect the premises of the Front Mission tactical-RPGs in whose universe Left Alive is set. Set in the near future, Front Mission’s world has evolved beyond the nation-state, with whole continents thrown together into supranational blocs by the forces of globalisation. Geopolitical tensions eventually resurface, and lead to conflict at a whole new scale. It looks like Left Alive will stay true to these themes, but perhaps explore their consequences at a more individual level.

There’s about ten seconds of gameplay right at the end – a character in tactical gear can be seen sprinting, rolling, taking cover, and shooting a variety of enemies – including a mech (aka, a ‘wanzer’, a portmanteau of the German wanderpanzer,or walking tank). If you’re keen to know more, we’ve learned quite a lot about Left Alive since its announcement – click here for the details.