When I visit Riot Games’ office in Dublin to check out the studio’s new CCG, Legends of Runeterra, I’m not alone. Writers, journalists, and influencers from across Europe are making the same trip. Ambitious and dedicated individuals ready to make the most of a professional opportunity, ready to network with their colleagues, to hunt for exclusive scoops and formulate business strategies. I’m not there for any of that, however. I’m there to be as excruciatingly irritating as humanly possible.

You see, there’s a thing with collectable card games. You have your optimal, tournament standard decks. And then fast decks, tough decks, and aggressive decks. And finally, annoying decks. Every game has them. The strategies they implement aren’t even that effective – they’ll lose as much as they win. But by god, they’re a nightmare to play against. Play with one, and after your opponent has finished beating you they’ll order you never to use the deck again.

With a whole day to explore Legends of Runeterra, I dive straight into the card library to analyse my character options. Hecarim is a possibility. The ghostly centaur relies on creatures with the ‘Intangible’ trait – they only last one turn before dying. Fun, but not quite right. Zed is another option, he creates shadow copies whenever you attack. But it’s still lacking that certain something.

Then I see him. Teemo, the Swift Scout. This adorable little panda plants poisonous mushrooms in the opponent’s deck every time he attacks. When they draw a card with mushrooms attached, they take damage. I can feel a pervasive itching at the back of my mind, a primal irritation at the very concept. I have found my deck.

Without any further ado, I start building. First, a couple of Teemos, then some Mushroom Cloud spells that add five mushrooms when cast. Next, some creatures. Some low mana beasts that add a Mushroom Cloud spell to your hand, and some higher level ones that add more. Then my personal favourite, the Mushroom Peddler. This jolly old man adds three mushrooms to the opponent’s deck every time you cast a spell. So, with the mushroom half of the deck finished, I now need another character to pair up with Teemo. 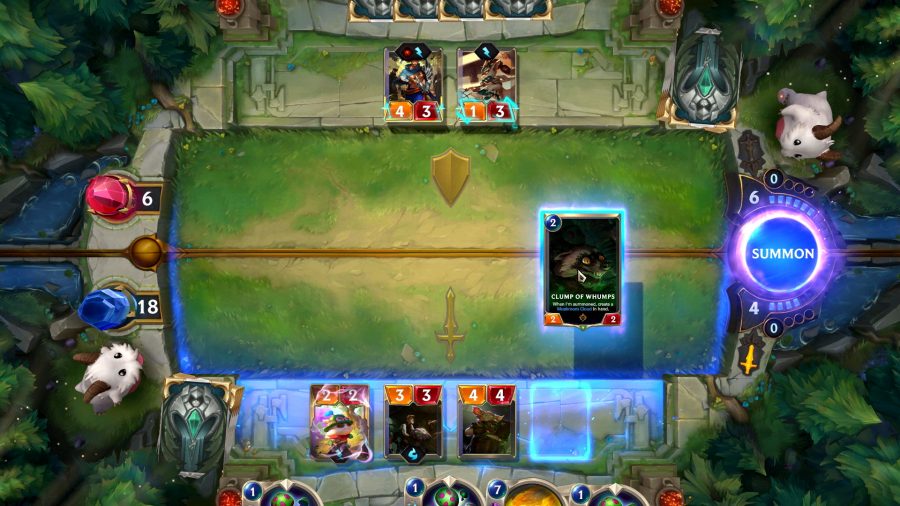 Legends of Runeterra cards are divided up by region, and each deck can have up to two different regions. I need something that would kill time while I build up my funghi. Surely Shen is the best option – his mechanics are all about shielding allies, after all. I take the new deck for a test spin. All wrong. Thanks to the conversational, back-and-forth flow of the game, I just can’t shield my units enough to stay in the game. Back to the drawing board.

Every time I have mana spare, I dump mushrooms into their deck

Yasuo is my next try. He’s all about stunning opponents. This time I do slightly better, winning the first game. Unfortunately, Yasuo runs into the same problems as Shen – there just isn’t enough time to keep everything stunned.

Maybe I’m thinking about this all wrong. I need to fight fire with fire. Ezreal and Heimerdinger enter the fray. Ezreal is all about direct damage spells – every turn he gives you a free one, and when you’ve used enough he powers them up. Heimerdinger spawns allies whenever you cast spells, helping me to build up a good defensive wall. 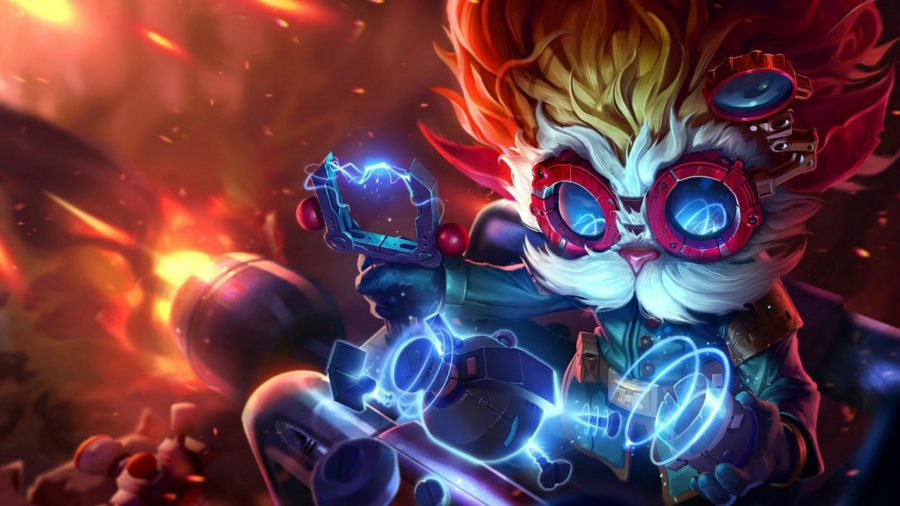 I take the new deck out into the fray, jumping into the game’s online matchmaking. Thankfully literally the only people playing online are my fellow game journalists, so I have the pleasure of seeing their faces at the moment of peak irritation. The first game goes perfectly. Every time my enemy summons a creature, I zap it. Every time I have mana spare, I dump mushrooms into their deck.

Teemos flood the battlefield, multiplying mushrooms exponentially. The game is close. At the end, my opponent is a single turn away from victory, but their life points are at six out of 20. They draw their card. Six mushrooms are attached to it. Victory for Teemo and the mushroom gang! I glance around the room. A fellow writer glances back. He smiles slightly, but in his eyes I see my prize: a raw, burning nugget of intense irritation. Mission accomplished.