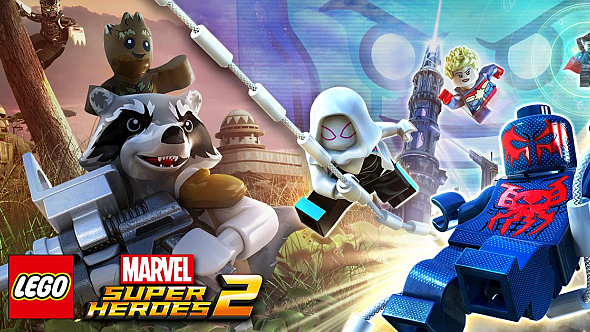 Update 26 May 2017: Lego Marvel Super Heroes 2 has got its full trailer, showing off a few faces that will appear in the game. One big face, in fact, it’s Ego, an entire living planet, because comics are sensible.

There’s also a few variants on Spider Man swinging around, plus a mention of the game’s big baddie: Kang the Conqueror. The kicker is that you’ll be able to travel through time because Kang’s broken the space-time continuum, and meet different versions of certain characters, like a cowboy Captain America.

There’s no box art for the game at the end, so perhaps it will only be a downloadable title, but that all too familiar “PC” symbol at least means we’ll be getting this Lego outing.

What else does the year have in store? Find out in our list of upcoming PC games.

It’s been almost four years since the original Lego Marvel Super Heroes, so it’s high time for a sequel, if for no other reason than that the Marvel cinematic universe has expanded hugely since then and this needs to be reflected. Today, series devs TT Games and publishers Warner Bros confirmed that the sequel is in development, and even gave us a release date: November 17.

You can check out the brief teaser trailer above, and look forward to a full-length one on May 23. As with the first game, you’ll follow “a completely original branching storyline” across many different Marvel locations, loosely organised around the open hub world of Chronopolis.

“Lego Marvel Super Heroes 2 introduces amazing new gameplay features, including the ability for characters to manipulate time and a four-player competitive Super Hero battling mode,” says Tom Stone, managing director of TT Games. “With a huge array of brand new characters from the Marvel universe, including old favourites in new guises, this game is sure to thrill both Lego and Marvel fans, as well as newcomers to the series.”

The new story will feature Kang the Conqueror as its main antagonist. From Chronopolis, players will visit ancient Egypt, the old West, New York in 2099, and the planet Sakaar, the setting of the much-loved Planet Hulk storyline. Dozens of characters from the Marvel universe will appear, naturally, and the game will have a four-player multiplayer co-op mode.