The new Logitech G Pro X is the company’s latest gaming headset, looking to step away from the over-designed traditional gamer aesthetic and shift more into the professional scene. And maybe take some of us normal folk along with it for the ride… I mean, we all want to be 1337 pro gamers, right?

But it’s not just about the look, the Logitech G Pro X is also looking to set a new standard in headset microphones too. By including the Blue Vo!ce [vom!t] technology you can tune the sound of your voice with the same sort of professional level filters that you might find in the high-end studio scene. I’m not going to pretend that the microphone attached to this headset is going to upstage any dedicated studio mic, but the filters on offer are the same and can make your voice sound as soothing over the nets as it does in real life… you honey-tongued hero, you.

Logitech has spent time in the company of esports pros, enlisting their help in the creation of a pair of cans it hopes will be the best gaming headset around. But how close has it got?

The essential tagline for the new Logitech G Pro X gaming headset is: “so all gamers, of all abilities, can hear and sound like a pro.” Because tech companies think we should all aspire to be professional gamers and/or streamers that’s how we are now being sold hardware; from headsets, to keyboards, mice, graphics cards, and even processors.

Hear no evil: These are the best gaming headsets around

But forget the marketing for a second, if the push for a more pro style from Logitech means we get peripherals that look like this I’m sold. I’m a terribly shallow human person, and the look of my headset means a lot… which is why I have powder pink cat ears attached to the Thresher Ultimates I use in the office. 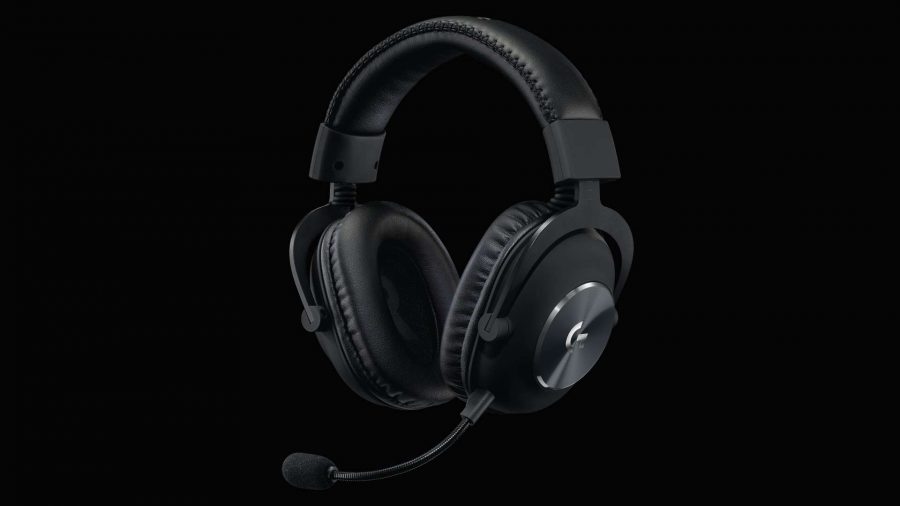 The new styling of the Pro X, and the Blue-less Pro versions, is classic, restrained, and looks for all the world like a pair of studio cans. Well, apart from the big ‘G’ standing proud from the aluminium-finished ear cup. But they do look good, and honestly rather familiar. I appreciate HyperX doesn’t have a monopoly on this classic look – the original Cloud Pro headset was essentially just a rebadged QPad QH-90 after all – but it does very much look like Logitech’s spied the gaming headset most of us agree is the best and tried to ape it.

It’s no carbon copy, however, despite how familiar the looks are. The 50mm Pro-G drivers have been tuned with redesigned magnets and housing, compared to the company’s previous 40mm drivers, and you get equalizer options, via the G-Hub app, that will set up your Pro X headset in exactly the same way as your favourite esports pro. There are also extra EQ profiles from Logitech G devs and other users.

We chatted with Logitech G’s Andrew Coonrad about the esports tuning pre-launch, and its pro gamers got fully involved in tweaking the EQ settings for the Pro X headset, making sure their own profiles match their particular play styles and preferences. 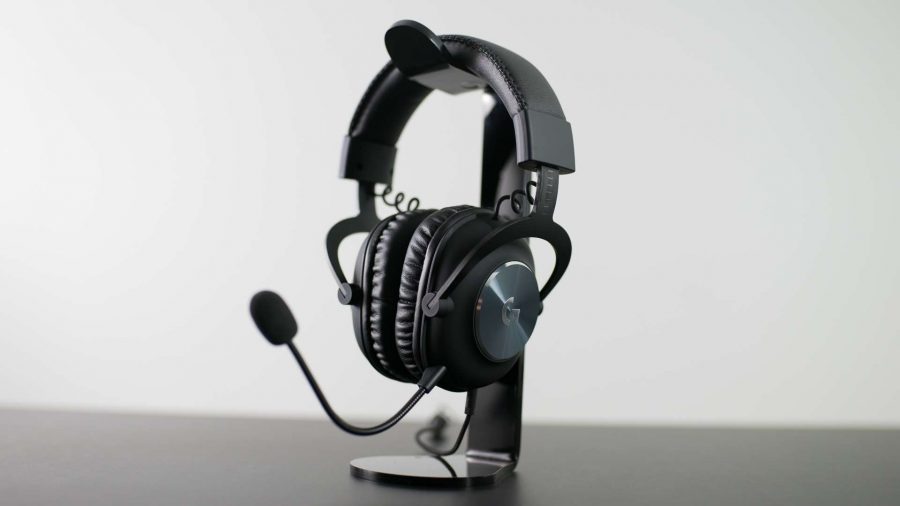 And guess what, every single one of them turned up the low-end frequencies. You could either take that as the Pro X cans are a bit lightweight on the bass tones, or you could go with “them gamerz like they ‘splodes.”

Seeing as the headset does already sound pretty robust even with a nice, flat EQ, I’m going with the latter.

Aside from the esports tuning, the Pro X also has another feather in its cap, one that I would argue is far more relevant, and also so simple you will wonder why it’s not been done before: the microphone tuning is brilliant. The collaboration with Blue Microphones might be responsible for the reprehensible Vo!ce branding, which makes me want to vomit in the soft headphone sack Logitech give you to store your cans in, but the way it allows you to hear what your voice sounds like before you get on a call, chat, or a stream is fantastic. 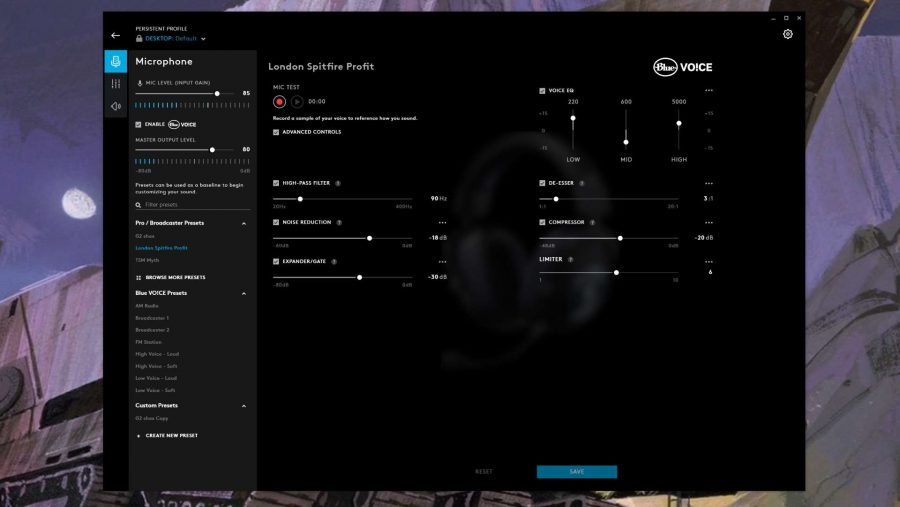 In the G-Hub app you can record a sample of your voice using the headset’s detachable mic and then play it back on a loop while you play around with the different equaliser  settings and filters to get your chocolate-smooth vocals sounding as good as they can. Again there are a host of presets you can use, or you can get down and dirty with the individual filters themselves.

Neither Logitech and Blue have created these filters, they’re standard use in studio setups, but by giving you the option to use them on a gaming headset, and allowing you to tweak them with a live sample, it means you can get the best sound before you really need it. For the streamer who doesn’t want to spend big on a discrete Blue mic this is arguably the next best thing.

I just wish the actual headset itself sounded better. Don’t get me wrong, I think the tuned 50mm drivers sound fine; there’s a good amount of detail in the low-end so even when it’s getting messy in Battlefield’s regular bombardments the audio’s not getting distorted. There’s good depth and separation down there too, it’s just that at the high end it doesn’t sound so good, especially when there’s a lot going on in the upper ranges. When something like the HyperX Cloud Alpha, or the Razer Thresher Ultimate, is able to separate tones so well at all levels it highlights where these 20Hz – 20kHz drivers start to fall down. 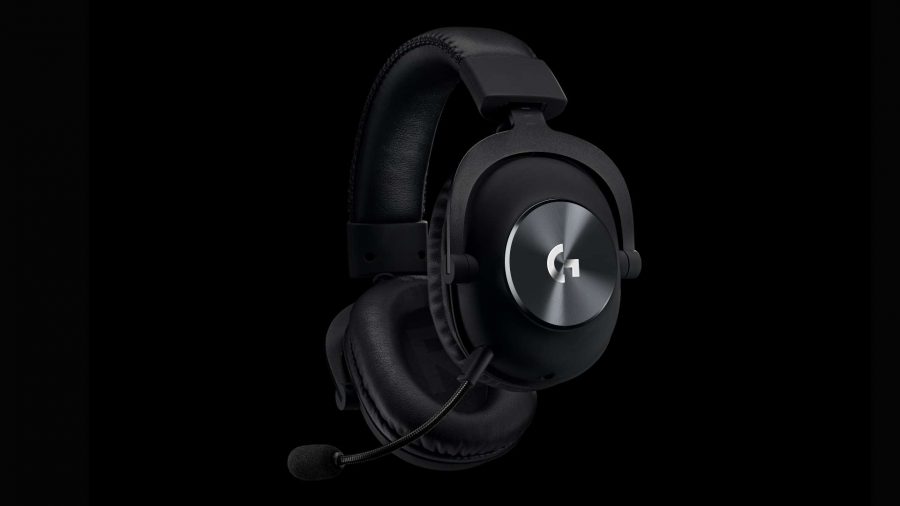 Audio is obviously subjective though, and I guess gamers are generally more forgiving of audio quality – if there are tightly tuned explosions then that’s often enough. But if you’ve been exposed to headsets with superior drivers – and they don’t always cost a lot – then it can be tough to go back. I’m also not always gaming using my headset either, and the Pro X does seem to struggle with some high definition audio.

And when Logitech is asking some $130 (£110) for the privilege, it feels a little too rich for the sound you’re getting in return. Sure, the DAC, where you can save all your profiles to take with you for all those gaming tournaments you’re bound to find yourself taking part in now you’ve got a Pro headset, is a welcome addition to the package, and the Blue Vo!ce implementation is super-smart, but I want all that on top of great-sounding audio, not instead of it.

The new Logitech gaming headset sure does look the part, and comes with some super-smart features, which are genuinely helpful, but while the audio is strong it can't match up to cheaper cans with better-sounding drivers.