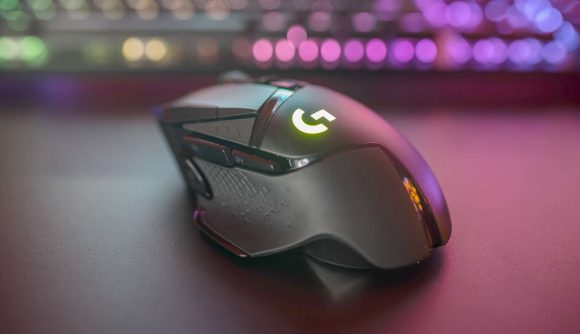 Logitech has unveiled a new gaming mouse. That’s an old mouse, but completely new, but not: the G502 Lightspeed. Yes, Logitech has finally created a wireless version of the classic G502, a mouse beloved by gamers, one of the most popular gaming mice in the world, and the rodent that launched a thousand ‘brick’ memes.

But that brings us quickly to arguably the most important point – despite the fact the new G502 Lightspeed is fully wireless, and optionally packs in the PowerPlay wireless charging tech, it’s actually lighter than the original design. The old G502 was a 121g mouse, ignoring the cable, and the Lightspeed version packs in a new sensor, a battery, and the wireless connection tech too, and yet comes in at just 114g.

“It’s a mechanical miracle,” as François Morrier, Logitech’s principal optical engineer says. That seems especially true as when Logitech asked existing G502 users what they might want from a wireless version they just asked for the exact same mouse but with every single bit of new technology the peripheral maker has created in the intervening years. No small feat.

“We started by listening to G502 users,” says Chris Pate, Logitech portfolio manager, “and they had a very straightforward request, what they wanted was a G502. Exactly. But with all the latest technology.”

Perfect pals: These are the best gaming keyboards around

And Logitech has managed it, the new G502 Lightspeed is practically identical on the outside, looking every inch as though someone has just modded an old G502 rodent with a homebrew wireless kit.

Except inside it’s completely different. 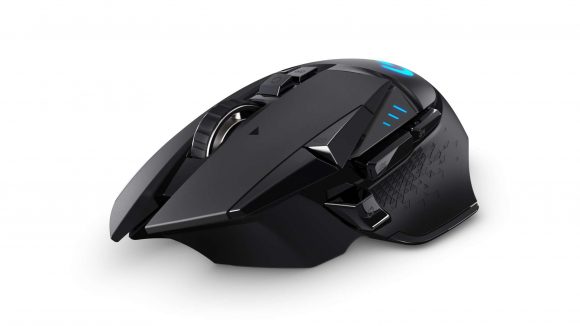 “The only thing that’s remained the same from the original G502,” says Pate, “is a couple of the feet.”

Despite looking and feeling identical, bar a more solid response from the side buttons, the innards have been completely replaced, down to the endoskeleton itself. “It’s just a very, very good mimic,” as Pate explains.

Thanks to the work done with the shell of our favourite gaming mouse, the G Pro Wireless and its thin wall moulding process, as well as the shrunken lens of the Hero 16K sensor, Logitech has been able to completely alter the internal make up of the mouse to allow for all the fresh wire-free tech without compromising and adding a metric sh*t ton of extra weight.

We’ve got an early sample of the new G502 – I’m using it right now – and it feels like a carbon copy of the old wired Proteus Spectrum. Except without the stupid name. 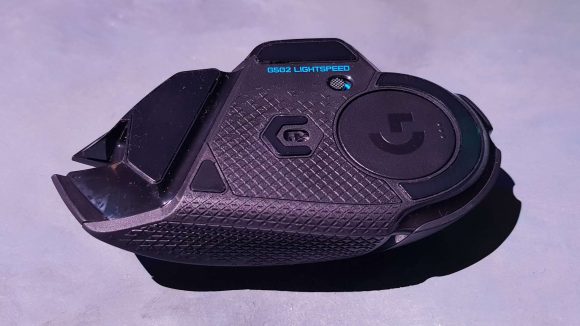 The new G502 packs in the advanced Lightspeed wireless connection tech, the same outstanding Hero 16K sensor that’s in the G Pro Wireless, and PowerPlay charging compatibility. Though the charging mat, et al is a costly extra. Considering the new G502 Lightspeed is already a $130 (£130) mouse that extra $100 for PowerPlay does make it a pricey package.

But you also get all the key features which made the G502 such a popular peripheral, such as the tunable weight system, adding another 16g of weight to the mouse, with four 2g inserts and a pair of 4g, the freewheeling scrollwheel, and the extra programmable buttons. 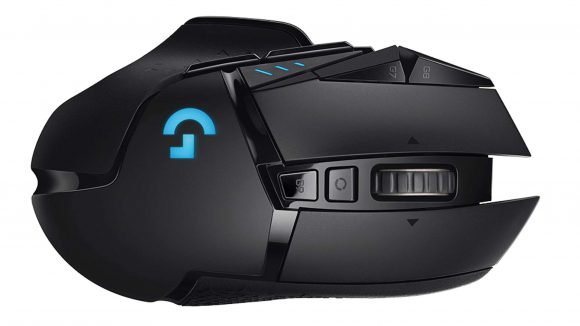 And while we’re talking numbers, the Hero 16K offers DPI settings up to 16,000DPI, acceleration that can top 40G, and acceleration levels above 400 inches per second. Essentially faster than you’ll realistically ever need.

Don’t worry too much if you can’t stretch to the impressive PowerPlay battery charging kit straight away though, as the G502 Lightspeed will run for up to 48 hours with the default lighting, or 60 hours if you ditch the RGBs. But who’s going to do that, eh?

But yeah, it’s another pricey ol’ gaming mouse, though this is one the community has been clamouring for for an age. And before the end of May it will be out and available for you to rest your game-weary digits on too.

I’ll be testing the new mouse all the way back from the Berlin launch event, so expect a review very soon.