If imitation is the sincerest form of flattery, then the team behind Lost in Random really love Tim Burton’s animated movies. Its world taps into the gothic suburbia that Burton is known for, and though its combat takes a while to hit its stride, the gorgeous claymation-like art style and the playful, mischievous score are a constant joy.

When Even begins her journey through the World of Random to save her sister, Odd, from the clutches of the evil queen, she’s practically defenceless. This expedition begins with a stealthy sequence in Even’s hometown of One-Town, but it’s not long before you’re abruptly thrown into the real action. Dropping into a graveyard full of dice and facing the hammer of a towering metallic soldier, Even is saved from certain death by an adorably small and squeaky die. Which, naturally, she names Dicey.

This is when Lost in Random’s deck-building mechanic comes into play. Enemies – such as oversized chess pieces and nightmarish clockwork automatons – will grow crystals during battle, which Even can break with her slingshot. Collecting these crystals generates power for Dicey, and when the diminutive die is fully charged you can throw it, freezing time so you can play cards. It’s a convoluted way to start a card game, sure, but if you must do so in the middle of a fight then stopping time seems a sensible precaution.

Card effects vary from generating a breakable weapon to activating a temporary buff every time you dodge. It’s easy to pick up at first, but it can get pretty complicated by the time you’re thumbing through a full deck whenever Dicey’s ready to roll. 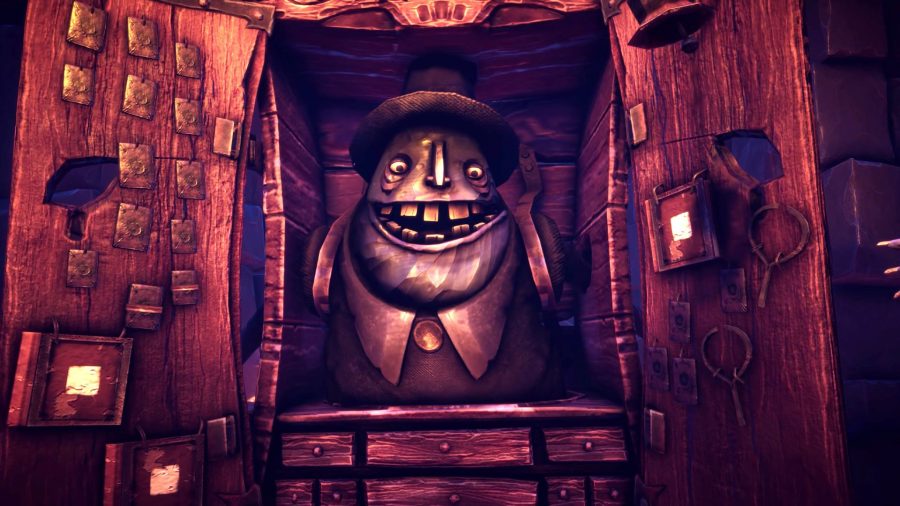 Even eventually stumbles into Two-Town – I’m sensing a theme here – and it’s here that Tim Burton’s expressionist influence is most apparent. Houses are warped and twisted, looming over the gloomy streets.

The monstrous locals, some with wolf- or fish-like features, gawp and gurn at you from their stalls like busted animatronics. It’s as if I’m walking through Halloween Town; the mayor even has a tall and pointy puritan hat. They all either have twins or multiple, divergent personalities, and there are plenty of interesting stories to be gleaned from sticking around to chat with them.

Two-Town is also the home of Mannie Dex, the cockney cabinet lurking at the end of a dark alley. Like a shady dealer waiting to open their trenchcoat and unveil a surfeit of knock-off watches, Mannie swings open his wooden doors to reveal a haul of cards for sale. I’m soon put at ease by this friendly geezer as he peddles his wares, enthusing over cards, and dodging my questions about how he came to be a walking wardrobe. 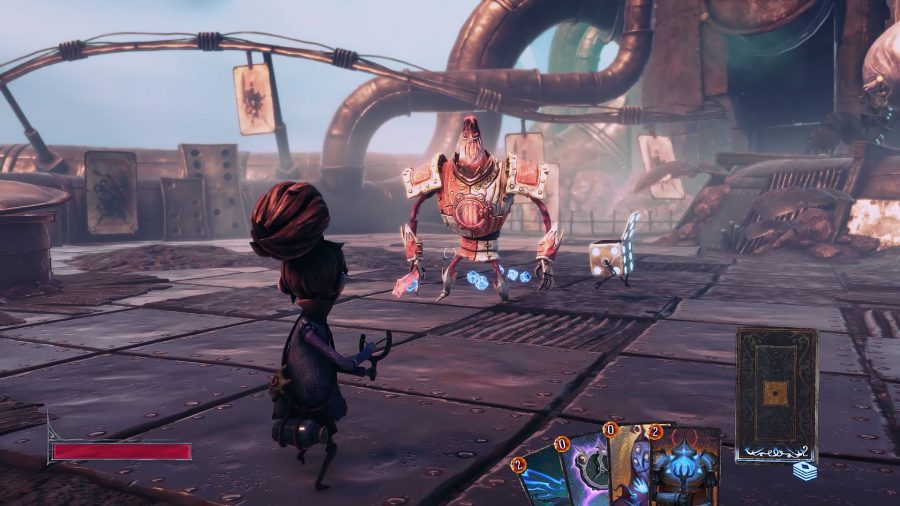 Mannie pops up regularly throughout Even’s journey, and as you purchase new cards you’ll eventually unlock new stock lines in the form of booster packs. Thankfully, as much as it sounds like one, this isn’t a vehicle for microtransactions. It’s a clever system that allows you some freedom in how you construct your deck, and it’s more streamlined than anything you’ll find in card games like Hearthstone or Magic: The Gathering, so non-deck builders shouldn’t struggle to get to grips with their collection.

Lost in Random’s mix of light action brawling and card game mechanics sounds unnatural, but for the most part it works. In any case, it’s the Burton-inspired world and its host of charming characters that serve as the real highlight here, and by the time the preview ends I find myself wanting to know what’s in store for Even as she enters the door to the next realm.

Lost in Random is set to release on September 10. For more like it you can check out our roundups of the best horror games and indie games on PC.