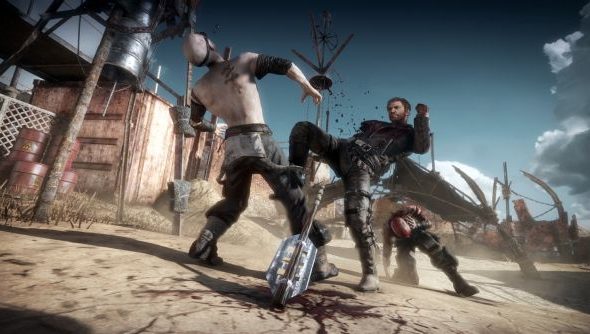 A franchise that’s existed almost as long as video games themselves, Mad Max is finally coming to video game tow. In what seems like a perfect match, it’s being developed by the purveyors of such absolutely joyful open-world destruction games like Just Cause 2, Avalanche Studios.

But to be honest, Avalanche haven’t got off on the best foot. Controversially, there wasn’t an Australian accent to be heard in our E3 demo. When word got out that Max himself didn’t have Aussie tones, people were up in arms, with a petition that managed to gather nearly three thousand signatures before Avalanche’s creative director Christofer Sundberg announced via Twitter that Max will have his correct accent restored after all.

Attn. fans who want Max to have an Aussie accent in #MadMaxGame : It shall be so. We admire your loyalty. You have been heard.

However, as the game isn’t supposed to directly tie into either the old or the new movie that’s currently in development, it’s possibly a moot point. What’s not a moot point is the other odd decision they’ve made: to make the car you drive throughout the game NOT Mad Max’s iconic Interceptor.

It’s a crazy decision — anyone who loves the franchise really can’t imagine driving around in anything else. There’s a narrative reason, of course: Max has had his Interceptor stolen, and the entire game is about questing to get it back. This quest is supported by Mad Max’s mechanic, Chumbucket, a grotesque dwarf who has created a vehicle called the “Magnum Opus” a heavy pickup truck of sorts that’s intended to be the ultimate vehicle for the wasteland.

Makes it seem a bit weird that Max is questing to get his old car back, then. 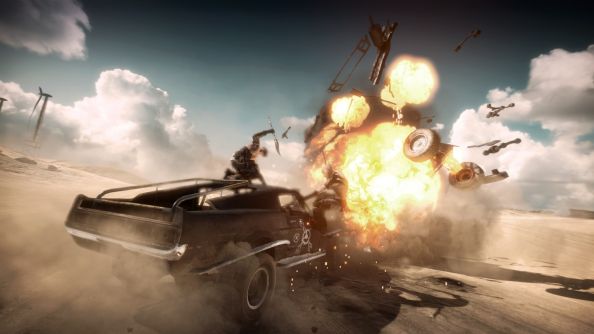 It’s obvious that Avalanche felt this decision supported the way they wanted to go in terms of the game’s play. The Magnum Opus can be changed and modified to the player’s chosen play style and their collection of scrap across the open world: increasing the tire size and tread to allow it to go more off road, or adding a huge pair of bull bars to increase the collision damage. One of the frustrations in Just Cause 2, for example, was when you wanted to get from point A to B via a straight line but had to navigate mountains and wavy roads; your choice of Magnum Opus could allow that.

So it’s not the worst decision in the entire world. Of course, that depends: it’s notable that in our E3 demo one area required the player to give the Magnum Opus bull bars in order to batter open a gate. No other ways past were offered: if the Magnum Opus is indeed a linear growth path, it’s highly disappointing.

The moment-to-moment play of Mad Max is perhaps more interesting than our griping over accents and vehicle choice, of course. It’s based around vehicle combat, with Max racing across the dunes and regularly harassed by roving gangs; in one segment of gameplay, Max found himself simultaneously ramming enemies while shooting off the enemies that had hopped onto the Magnum Opus with a shotgun. There were many moments of “bullet time” slow down, and even more absurd and grotesque violence as you blow a person’s face off with a shotgun. 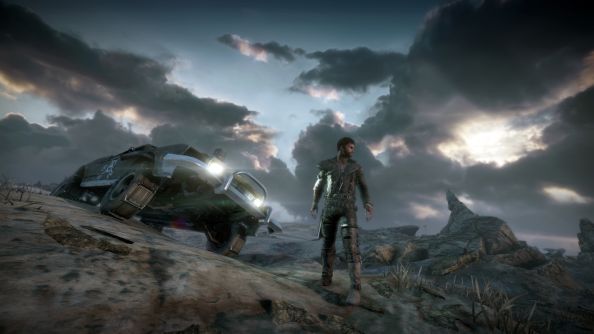 It is literally visceral, and it doesn’t get any less so when Max leaves the vehicle, choosing to attack his enemies with a “Thunderstick,” a horrific electrified prod with gruesome results. But, of course, Max’s melee combat follows the Arkham Asylum template, so it’s rather unremarkable compared to the thrilling vehicle combat.

If there’s a bigger problem facing Mad Max, it’s how easily players can get tired of a samey environment across the many, many hours they’ll spend in a game world. I don’t know about you but I was sick of the original Borderlands’ browns by the second half of the game, and it’s hard to see how Mad Max is going to offer anything more varied — while the Australian outback is a captivating, otherworldly setting for Max’s post-Apocalyptic shenanigans across an hour and a half, there will have to be more than deserts, rocks and shanty-towns for Max to explore. No hint of that yet from Avalanche, though they are promising that Max will have to explore far and wide for salvage to improve the Magnum Opus, fuel and other MacGuffins across the game.

And alongside that, Avalanche offer, their history creating absolutely wild open world mayhem. If they can find a way to make every battle have meaning through Max’s true struggle for survival in a harsh wasteland through those struggles for salvage, then Mad Max just might be their strongest game yet.