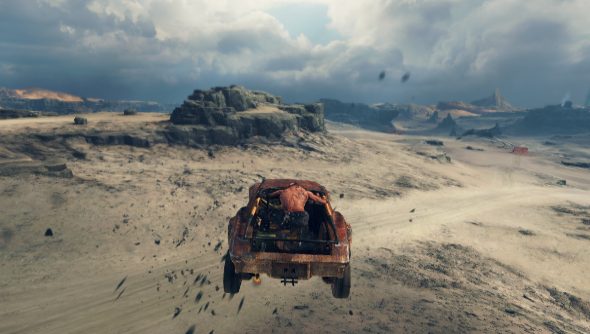 After the catastrophic PC port of Batman: Arkham Knight, the Warner Bros. logo doesn’t exactly inspire confidence. Batman’s latest outing has still not reappeared on Steam, over a month after its official launch.

With that giant mess still lingering, it’s a surprise, then, to see that the publisher’s latest PC port, Avalanche-developed Mad Max, is actually extremely competent. Even if I wasn’t comparing it to Arkham Knight, I’d consider it a very strong port. 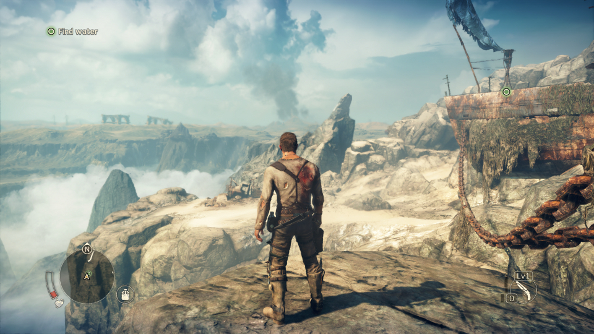 Like the films before it, Avalanche’s Mad Max paints a striking picture of the post-apocalypse. There’s always something impressive to gawk at on the horizon, be it a monstrous storm rolling in, the skeletal remains of a long-dead sea creature, or giant, derelict structures spewing smoke into the already ruined atmosphere.

It’s beautiful, even though it’s a hellscape.

To get the most out of this gorgeous, but dead world, you don’t need a beastly rig, either. Warner Bros. and Avalanche recommend a 3GB GPU, a GTX 760 or HD 7970 or equivalent, an i7-3770 or an FX-8350, but the range of graphics options provide a lot of room for tweaking, meaning that if you don’t hit the recommended requirements, you’re not out of luck.

The list of graphics options is both impressive and confusing. It’s a very long list, giving you a huge amount of control over how the game looks and performs, but — and this is now extremely common — the language used and the context of the options are a bit bewildering. 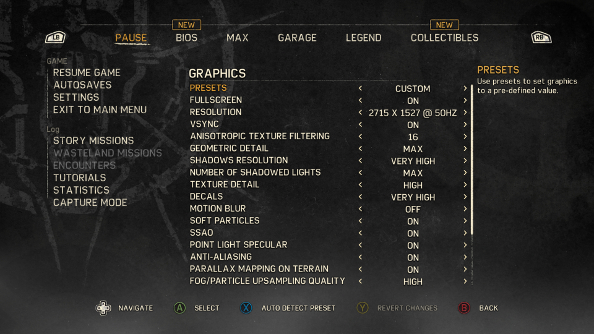 Take the presets, for example. The lowest preset is “normal”, and selecting that keeps a large number of the options below it set to “high”. If you’ve got an older machine, your best bet is to fiddle with each option rather than using the presets. Similarly, selecting the “very high” preset, the maximum, does not change every option to its maximum. For instance, anisotropic filtering will be set to 12, instead of 16.

I’m a bit reminded of Durex’s campaign to make men feel more confident about their willies. If you buy a regular sized condom today, what you’re buying is what Durex once called “small”, but they didn’t sell very well because nobody wants their contraception to judge their penis size. When they changed the name to “regular”, sales suddenly went up. 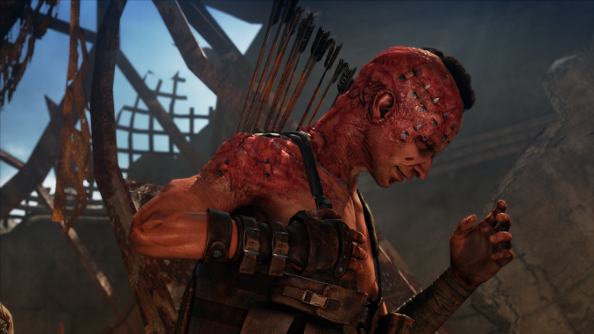 Mad Max’s graphics settings cover everything you could possibly want to fiddle with, and aside from the weird presets and inconsistent descriptions (sometimes the maximum setting is “very high” and sometimes it’s simply “max”), the only disappointment is the lack of anti-aliasing options. On or off are all you’ll get.

The below image has everything cranked right up. It’s the highest preset with a few additional elements turned up as well, along with Nvidia’s Dynamic Super Resolution. Because of my monitor, I run most games at 1920×1980, but with 2715×1527 DSR, I witnessed no performance hit, while smoothing out some rough edges.

With these settings, I’ve been enjoying 60fps with no dips, and with a different monitor and no vsync, this only increases. 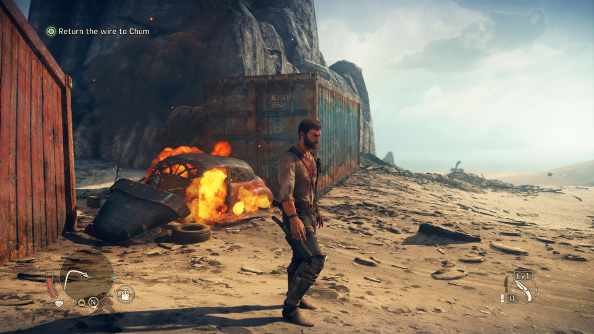 Turning a few options down by selecting the highest preset doesn’t dramatically change the quality, however. 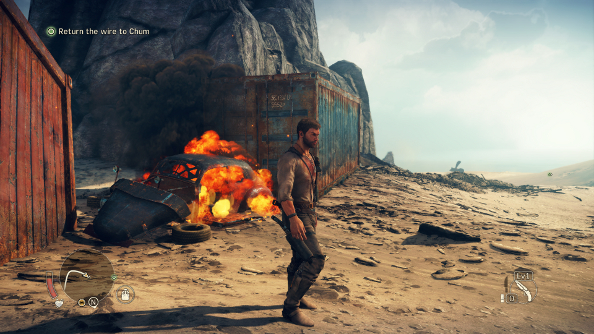 The second highest preset lowers the detail of objects that aren’t right next to Max, while also reducing the quality of the shadows, and overall it just doesn’t look as sharp. In motion, however, when you’re speeding through this dead, dried up ocean, it’s not all that noticeable. 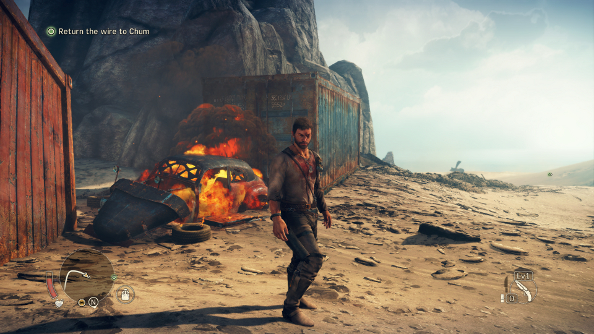 Once we get to the “normal” preset, things start to look very different. It’s flatter, with a lot less ground clutter, the shadows are noticeably poorer, and effects like smoke and fire take a pretty big hit. Note that this is the lowest preset, however, and still looks quite good. 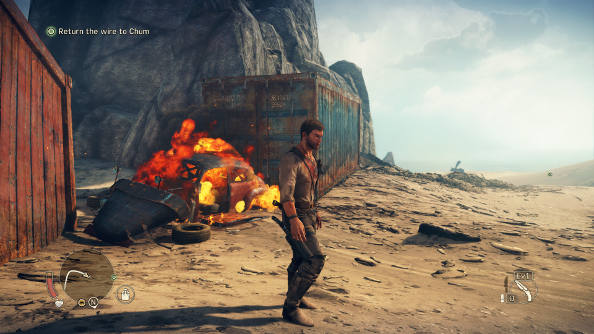 As previously mentioned, the lowest preset still keeps a lot of options turned on or high, but all of them can be reduced manually. Here’s what it looks like when you do that. 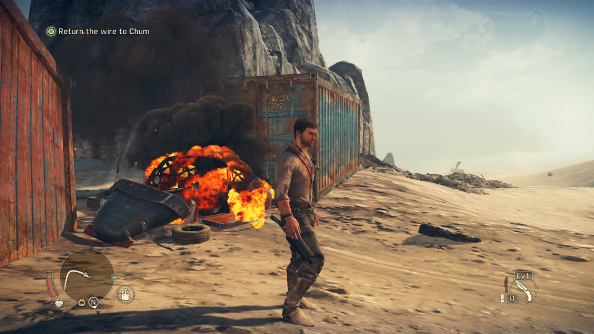 Not too pretty. But this is good! It’s hardly hideous, and if your PC is struggling with all those bells and whistles on higher settings, then you should see a dramatic improvement by just doing some fiddling yourself.

Beyond the graphics settings, customisation is maintained, but is a little less even. The UI is ignored entirely, so you’re stuck with the mini-map and objective tracker, which does occasionally threaten to break immersion, yet the UI is not so cluttered that it quite succeeds in doing that.

Audio customisation is much better. Several audio presets allow you to fine tune the sounds, depending on your speaker setup and even if you’re playing a night and want to be a bit quieter. There’s deeper customisation outside of the presets, too. 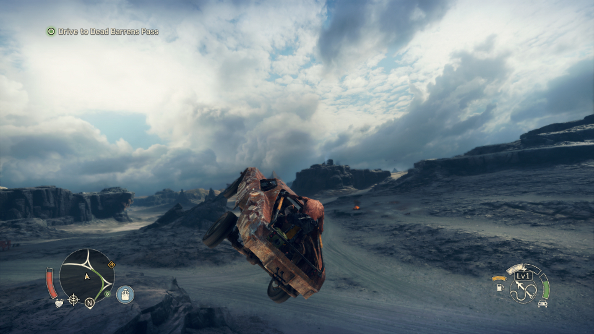 Control customisation is similarly robust. If you’re using a gamepad, then you can choose between two different control schemes for driving and walking, and if you opt to use your mouse and keyboard, you can remap every key. I do recommend a gamepad, however, particularly for driving. It’s simply less fiddly, and really feels like it was designed for a more compact control scheme.

Regardless of whether you use a gamepad or a mouse and keyboard, Max and his trusty metal steed neither control like a dream or like a nightmare. Driving is arcadey and easy, though the inexplicable lack of a handbrake is extremely frustrating, while Max himself — in combat — never feels quite as empowering or graceful as Batman (the combat is similar, however, in that it’s all about rhythm and countering), though this certainly fits with his status as a brawling hard-ass. 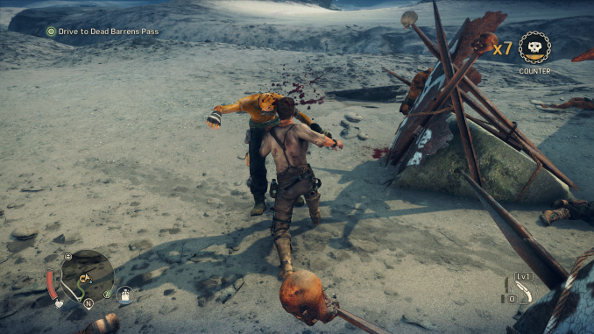 Avalanche has clearly taken great care with the PC version of Mad Max, and if you have the option to pick up either the PC or console versions, you should definitely go with this one. Any minor niggles present in the game are there regardless of platform, while the PC boasts improved performance and graphics.

The real question is whether or not you’re tired of the open world formula that’s become… well, formulaic. Mad Max sticks to it religiously, offering very little that could be considered new or refreshing. Yet the setting, the visually arresting and empowering car combat, and the scale of the Australian wasteland are all impressive, and importantly, it’s proving to be a fun ride.