Mafia is a series that’s always been content to do its own thing. While open worlds were being filled with diversions and collectibles and side missions, the first two Mafia games used their cities as mere stages, focusing instead on curated action set pieces and well-paced story. The result was a pair of games that were both more digestible and less bogged down by fluff.

Check out our Mafia III port review for an in-depth analysis of how the game performs on PC.

The latest entry in the series, Mafia III, continues this tradition, leading players through tense shootouts, a chaotic heist, a high-speed boat chase, with documentary-style interviews helping to set the tone. No moment is wasted. It clips along at a fast pace, mixing things up just enough to keep you wondering what’s around the corner. Then, a few hours in, Mafia III calls it a day, and you’ll spend the rest of the game wondering what the hell happened.

I can’t think of many games – or any, even – that peak as quickly as Mafia III. The first few hours have all the ingredients of an exciting, varied action game, wrapped up in a plot and setting that is both uncomfortable and depressing, but ultimately fascinating. And then the whole thing just unravels. 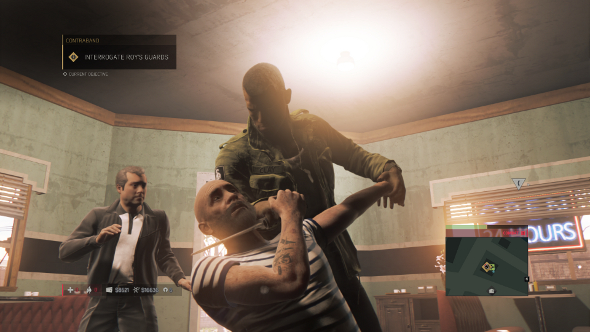 Lincoln Clay is an ex-special forces Vietnam vet, finally back home in the fictional town of New Bordeaux. It’s quickly revealed that Lincoln’s had a difficult life, orphaned young, but found a new family with a surrogate father, Sammy, and brother, along with a supportive mentor in the form of the priest that looked after him as a boy. Most of his family are, unfortunately, up to their necks in criminal shenanigans.

None of this is particularly novel, but set as Mafia III is in not just 1968, but the South, and with Lincoln being African American, this is not your usual tale of organised crime. There’s a lot to Lincoln. He’s bold, he’s charitable, he’s loyal, and he’s also a friggin’ giant. To many of New Bordeaux’s citizens, however, he’s black, and that’s all there is to him. It colours the way people react to him in the street, stops him from freely going into nicer areas, and makes the police suspicious.

Hangar 13 have certainly not shied away from the monstrous realities of the era, and it goes well beyond the racial slurs. You’ll notice, for instance, that if the police are called after you’ve stolen a car or killed someone, their response time depends on the area. Affluent, white areas? They’ll drop everything and be there in a jiffy. Poorer, black areas? They’ll saunter over when they feel like it. 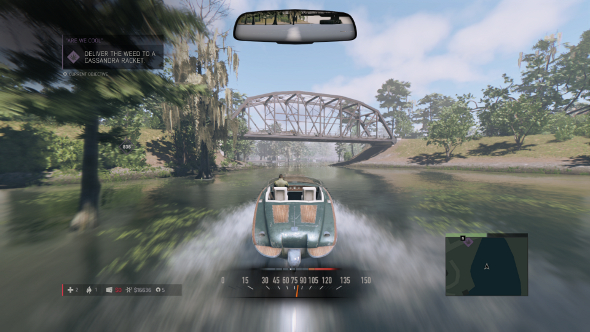 As the game kicks off, Lincoln has just returned home, and quickly becomes embroiled in a heist for the resident head honcho, the aging Sal Marcano. Sammy essentially works for him, running his own gang but ultimately subordinateand Lincoln wants to help out the man that helped raise him. There’s little of the long, A to B drives between missions, and we’re bounced up and down Lincoln’s timeline, going from the heist itself to some of the events that lead up to it and then back to the heist. All the time, we’re treated to those aforementioned interviews that hint at the future, and we get glimpses of Lincoln’s life and his relationship with his adoptive family.

Unfortunately, this is all just a setup for the main game. There’s betrayal, murder, and Lincoln becomes a one-man army, declaring war on Sammy’s old boss. This is when it becomes properly open-world, and is all the worse for it. The linear, exciting missions give way for an endless string of often boring fights and long drives in between. You go from one warehouse or business to the next, killing guys and sometimes destroying their property until, eventually, you draw out the person running the racket, who has inexplicably been waiting for you to destroy his entire business before appearing. Then you kill him. And then you start again.

The goal of this is to take over the various districts of New Bordeaux, taking them from the boss and giving them to your new minions, who in turn give you a cut of the profits. It’s pretty much the same formula for every district. Speak to someone, they’ll tell you to speak to a couple more people, and they’ll get you to run through the same missions until you conquer the area. Your reward: a constant flow of cash and a few side missions that are somehow even worse than the other ones. My favourite? Drive half-way across the map, pick some stuff up, come back. That also happens to be almost all of them. 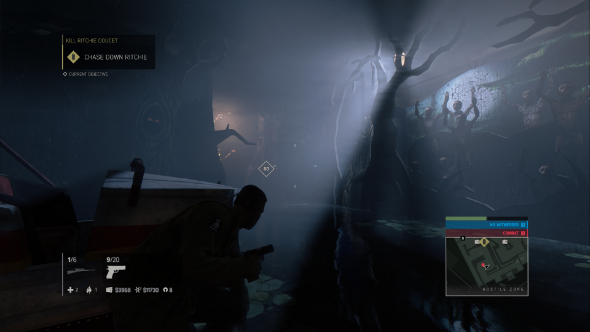 Regardless of whether it’s a story mission or a side mission, they all sort of bleed together. Few are memorable, aside from some of the climatic mission of a chain. My favourite remains one of the first: hunting down enemies in a derelict, flooded amusement park. At night. It’s a fantastic setting and a tense fight, and there are a few others, a set piece battle here, a chase there, but they are the exceptions.

Though it’s a more conventional open-world game than its predecessors, New Bordeaux still feels strangely empty. There are collectibles, like paintings and Playboys, neither of which compelled me to go treasure hunting, as well as some wiretapping nonsense that reveals all the collectibles in a specific area. Beyond that there’s nothing else to do. But being an open-world game, there are still unexpected, emergent moments.

After you piss off Sal Marcano enough, he starts sending out hit squads after you. I was driving down the street, minding my own business, when I ran into my first hit squad. I took them on a short chase, smashing through fences and almost driving into the river at least three times, until I finally found sanctuary. It was one of the businesses I’d taken over, and thus was filled with my gun-toting pals. When the hitmen rolled in and opened fire, they were greeted by a small army of my mates. Then the cops, paid off by Marcano, appeared and joined in. A war was fought that day, in a warehouse carpark. When the dust settled, there was nothing but burning cars and dead bodies. As I surveyed the carnage, a ballad played on the radio of one of the few functioning vehicles. It was haunting. 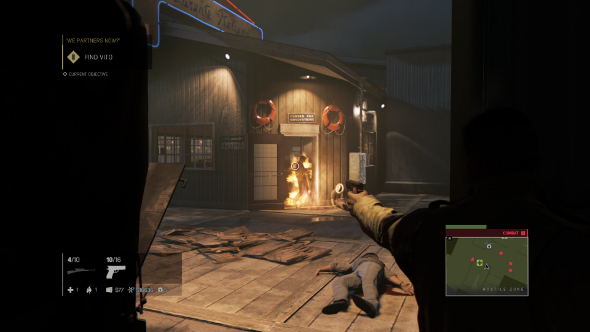 Most of the time, though, driving through New Bordeaux is a rather boring experience. Some parts of the city are striking, especially at night, and it’s varied to the point where there’s even a sprawling bayou and plenty of countryside, but they’re devoid of excitement. They are places you drive through. A lot. And that’s it. It’s so dull that a chase is a novelty. Imagine that, in an open-world crime game. Steal some drugs from a bunch of gangsters, and they’ll happily keep shooting at you until you get in your car and drive away. When that happens, they just go back to whatever it is gangsters do when they’re not doing all the crimes. Play cards, I guess. Cops aren’t much harder to avoid.

Though I’m disappointed by the majority of the missions, the combat itself can be quite good. Shooting is simple and cover-based, but every weapon feels powerful and when an enemy is hit, they react dramatically, but also convincingly, depending on where they are struck and by what caliber of bullet. There’s some basic stealth, as well, with the brutal melee combat emphasising sneak attacks from behind, instantly killing opponents. There’s one problem, however, and it’s a rather large one: enemy AI is terrible. Oh god, it is so, so very bad. The only tactic it knows is occasional flanking and the ineffectual tossing of molotov cocktails. Most of the time, enemies just hide behind cover and occasionally shoot. When they’re not completely losing it, I mean. 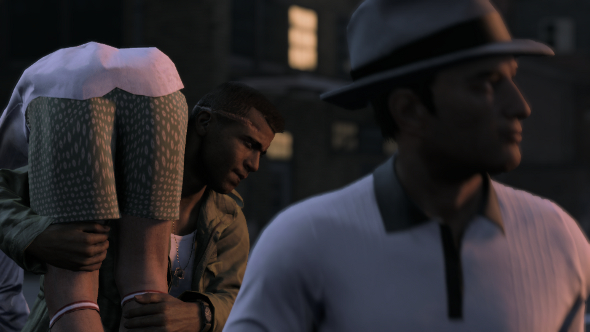 I’ve seen some strange things. Two cops turning in unison to shoot a wall for two minutes. A gangster trying to run and shoot but aiming at the ground instead of me. Enemies standing right next to but not noticing me. It’s a game with its fair share of bugs. That’s just enemies. There’s also lots of clipping, fighting people through walls, broken physics, loads of lighting glitches, and NPCs getting stuck in things. This is only the tip of the iceberg, as the game suffers from a multitude of technical problems, which you can read more about in our Mafia 3 PC port review. The headline is that it’s a very poor port.

Mafia III is a distinctly mediocre game, and it’s incredibly frustrating because there’s so clearly a massive amount of potential hidden inside it. Annoyingly, so much of what could have made it great gets pushed to the side for more rote gunfights. Most underutilised is the game’s intriguing cast, whose stories are often more compelling than Lincoln’s. Early on, there’s a drug smuggler working for Cassandra, a boss that eventually agrees to work under Lincoln. This guy is the source of some of the game’s worst missions, but I did them just to learn a little more about him. He’s Haitian, a victim of Papa Doc’s brutal regime. He tells Lincoln about the fate of his family, about his life smuggling people out of Haiti, how he remembers every one of them. It’s a fictional character, but real tragedy. 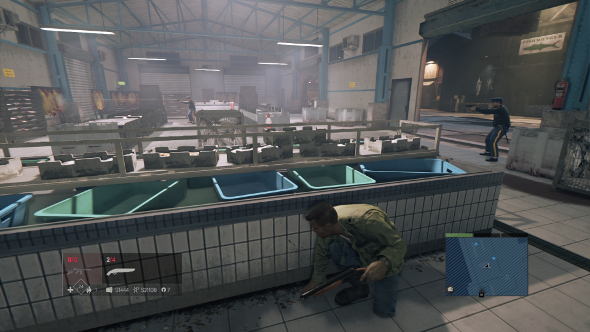 Even that snippet of a man’s life is, lamentably, more interesting than the game’s central narrative. Once it quickly descends into a revenge story, it’s hard not to check out. Lincoln becomes a bulldozer, smashing up one racket after another, and that’s the whole game. It’s not a story so much as a series of tasks. There’s no real nuance to either Lincoln, who becomes just a straight-talking bloke who kills a lot of people, or his mission to take down Marcano. And there’s not much tension, either, as Marcano doesn’t seem like a remotely competent boss, and Lincoln quickly gathers a tonne of allies.

It’s a wasted opportunity. The uncomfortable truths about the era, the fascinating characters, the potential for a meaningful exploration of history and race, it’s all squandered and we’re left, instead, with a very conservative action game that’s only elevated by its bold setting.