Just imagine how cool an adaptation of Magic: The Gathering might be in the hands of the directors of the latest Avengers movies. Well, soon you won’t have to. In a press release, Magic creator Wizards of the Coast announced that the Russo Brothers will work with Hasbro on an animated Netflix series based on the globally-renowned card game.

The series will bring the game to the screen for the first time in the 26 years it’s been around, we can assume much to the delight of its 38 million fans. Joe and Anthony Russo will executive produce it, with Henry Gilroy (Star Wars: The Clone Wars, Star Wars Rebels) and Jose Molina (The Tick, Agent Carter) on board as lead writers.

According to the release, the series will feature a brand new storyline that builds on the Planeswalkers’ stories. You remember these guys – the really special magic-wielding folk, who make as impressive goodies as they do baddies. Oh, and they’re the Magic multiverse’s most powerful beings. Pretty exciting stuff, then.

The programme will be animated by Bardel Entertainment, which has worked for DreamWorks, Warner Bros., Nickelodeon, plus others. The one promo image released (included below) shows a lone figure who, judging by the armour, goggles, and hair aflame with magic, looks to be Planeswalker and pyromancer Chandra Nalaar. Hopefully we’ll get a glimpse of some others very soon. 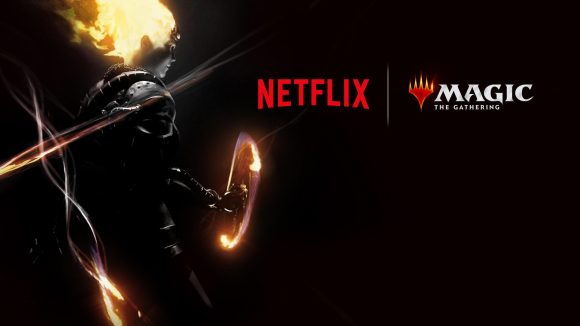 There is no information yet on when the series will enter production or when we can expect to see it hit our small screens, but hopefully we won’t have to wait long to jump into the planes of the Magic multiverse.

Related: Magic: The Gathering is too complex for computers to solve

This time, we really do want to know what happens after Nalaar puts on the goggles.