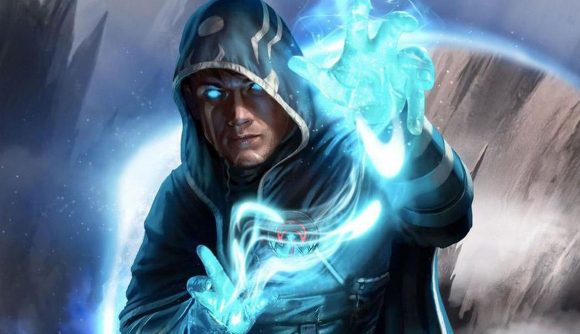 Ahead of the release of Magic: The Gathering – Arena’s fairytale-themed expansion, Throne of Eldraine, Wizards of the Coast is showing off some of the new entries making their way to the game – and we have an exclusive card to reveal for you ahead of the upcoming set’s arrival next month.

Folio of Fancies is an artifact with a converted mana cost of two (one generic, one blue). When played, it automatically removes hand-size limits from the game, allowing players to hold as many cards as they like. That can be handy (get it?) in the right hands (sorry), but it’s Folio of Fancies’ other uses that make it particularly dangerous.

By spending mana in multiples of two, Folio of Fancies forces both players two draw a card. For example, tap two generic land cards to draw one card, four to draw two cards, etc. After spending a couple of turns filling up your hands, you can tap three more land cards (two generic, one blue), to make each opponent put a number of cards equal to the number of cards in their hand from the top of their library straight into the graveyard.

You can take a look at Folio of Fancies for yourself in the image below. 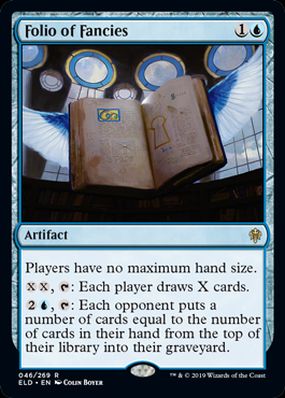 It’s likely to prove a perfect fit for blue control decks, and when paired with enchantments like Psychic Corrosion and Drowned Secrets, it shouldn’t take too long to empty your opponents’ library, handing you the win. If you want a little extra security, using the card alongside Jace, Wielder of Mysteries will mean that even if you run out of cards as you’re drawing, you’ll still win the match.

Throne of Eldraine arrives in Arena on September 26 (in time to coincide with the game’s full release) and the tabletop game on October 4.