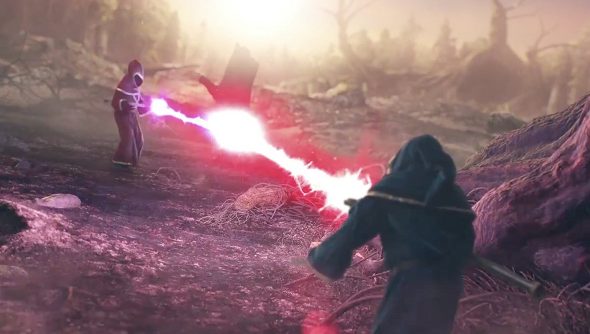 War never changes, right? Wrong. Sometimes it wears a bright yellow monk’s robe. Throw in sociopathic wizards and their quirky imp cohorts and you’ve got a war unlike any other. Magicka: Wizard Wars has taken the murderous spellcasters from Paradox and Arrowhead’s Magicka series out of their natural environment and flung them into a verdant PvP arena, one that rapidly becomes drenched in blood and viscera.

While Paradox North has taken the reins from Arrowhead, Wizard Wars still continues the tradition of experimental spell combos, slapstick comedy and manic violence, but the conflict is more focused and – with most of the foes being human – the challenge is even greater. This might be the most fun Magicka has ever been, but only if you can find a match. 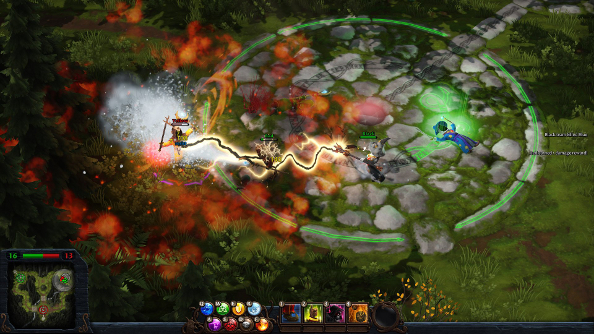 There was always a hint of PvP in Magicka, with friendly-fire ensuring that friendships were tested and betrayals were common, but such antics were obstacles in a game that required teamwork to overcome the hordes of monstrous enemies. Wizard Wars ditches this in favour of pitting eight wizards against each other in teams of four, tasking them with slaughtering each other in a single arena, with more in development.

With capture points, lanes and even creeps – a role played by the affable imps who guard captured areas or follow their wizard masters into combat – there’s more than a whiff of MOBA about Wizard Wars, but it’s more accessible than most, with every player sporting the same abilities and each unlocking gear from the same pool, like a kung-fu monk costume or a nasty looking axe, levelling the playing field somewhat.

Matches are short affairs too, rarely running for more than 10 minutes, and sometimes even ending after a mere 60 seconds. Three capture points are spread across the battlefield, and if one team captures them all, there’s nowhere for deceased enemies to respawn. When this occurs – and it does so frequently – it’s up to the survivors to desperately attempt to capture another point and bring back their fallen allies, causing the scrap to devolve into a frenetic chase and more than a small amount of sweating.

Each team also has a pool of respawn tickets, so that even if they have captured a point, allies won’t respawn if there are no tickets left. This forces players to be aggressive and defensive in equal measure, splitting their time between running up lanes and stealing enemy controlled areas as well as relentlessly hunting down their enemies.

It’s a simple but functional setup, in stark contrast to the complex combat mechanics. Like its progenitor, Wizard Wars gives players a significant arsenal of magic to play with: six spells that can be combined in threes to create more powerful, diverse amalgamations. Combine fire and lightning, and your shocking blasts will also set foes on fire. Combine earth and shield and a huge wall of stone will rip out of the ground.

Spells can be cast outwards and inwards, so the aforementioned earth shield can also be cast on yourself. The effect being that instead of being protected by a wall of rock, you walk around with extra protection against earth magic. 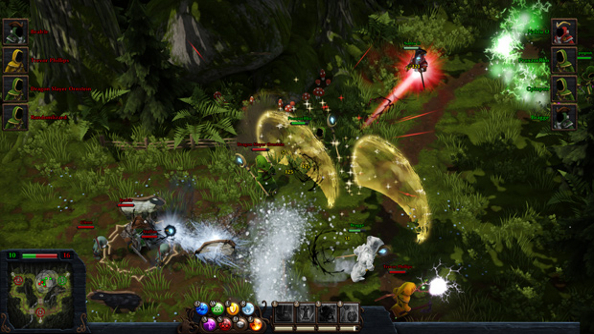 The joy of Wizard Wars is in the experimentation, but the fast pace of the battles give players little time to fiddle around with their arcane bag of tricks. It’s a reactive game: if a dastardly enemy is protected against fire, you shoot out some lightning; if your foe is sending out beams of fire, you drop an energy shield, reflecting the attack; if you’re on fire, slowly burning to a smelly crisp, douse yourself with some water.

What sets Wizard Wars apart from many of its peers is that it rarely makes one’s blood boil – unless they have been set on fire – and rage doesn’t get a look in. If you lose a match that you’ve only invested a few minutes into, it’s hardly likely to cause frustration, and the light show of spells going off in every direction, enemies and allies alike exploding into giblets and the opportunity to test out some new combos makes each match fun, even when you’re not celebrating a win. Laughter and squeals of delight are much more commonplace than curses or insults.

Sure, it’s competitive. You want to win, but it encourages fun and silliness above all else, which is something that often feels absent from other MOBAs or, just generally within the PC’s multiplayer communities. For one, friendly-fire is firmly switched to ‘on’. You’re as likely to be hit by an ally as you are an enemy when there are a few of you duking it out. Sometimes it’s a wayward beam of death reflecting off a foe’s energy shield, or maybe a one-time chum has just lost control in a moment of blood lust – the risk is always there. 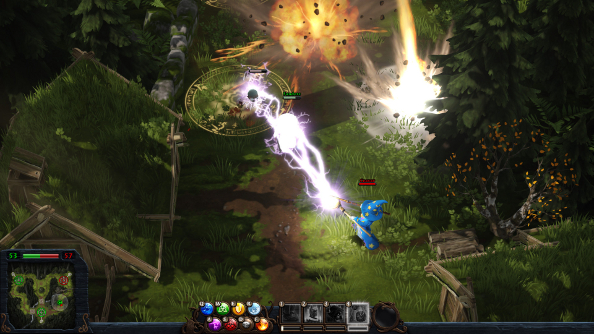 Special abilities that unlock over time can be the most deadly to friend and foe alike. Some of the powers are defensive, like a teleportation spell, while others are devastating spells of mass destruction. The meteor shower pummels the area, slaughtering anyone who can’t get out of the way in time, while the Grim Reaper will attempt to kill anyone close by, regardless of their allegiance. It’s chaotic and messy, and I wouldn’t have it any other way.

But I worry. I cannot help but remember The Showdown Effect, developed by the original Magicka’s creators, Arrowhead. It was great: a unique blend of ‘80s action movie nostalgia, platforming and multiplayer mayhem, and then people just stopped playing. A multiplayer title lives and dies by player numbers, and it is tough to find a match in Wizard Wars. Of course, it’s only in alpha at the moment and at peak times you can usually find a match (at least if you’re on the EU servers), but it’s worth buying with a bunch of friends.

Now, if you don’t mind, I have a magical flintlock pistol to unlock and enemies to murder. I may be some time.