In 1971, David Bowie warned his music publisher and confidant Bob Grace that he was about to become suddenly elusive. In 1972 Bob couldn’t get hold of him on the phone, and by 1973, Ziggy Stardust was everywhere.

The Artful Escape of Francis Vendetti is about the intervening period. Not the real story, which found Bowie accompanied to shows by bodyguards and whisked away by chauffeurs he couldn’t afford in an effort to project star power, but the fantastical version: the astral pathways you imagine plain old David Jones would have to explore to return as a bisexual alien rock god.

Our Bowie stand-in, Francis Vendetti, begins the game more as a Sean Lennon-like figure – the nephew of a legendary folk singer whose name looms large, literally, on the posters advertising his debut performance. The night before facing his public, Francis sets off down an abandoned multidimensional roadway to discover his own persona. Or as the trailer puts it, who he isn’t.

“That saying, ‘always be yourself’. I hate that,” says lead designer, writer, drawer, animator and musician Johnny Galvatron. “Characters often say that to Francis and it’s just so lame. Don’t be yourself. These art forms, like music or videogames, allow you to create your own persona. And all your actions can inform your core art – people don’t just look at Bowie’s music in a vacuum.”

The tangled, kaleidoscopic backgrounds of The Artful Escape certainly aren’t restricted by reality – but the journey isn’t entirely fantasy for Galvatron. He invented his own alter ego for The Galvatrons, the Australian Van Halen and Devo disciples who signed to Warner Bros, had a couple of charting singles and toured through Europe at the end of the last decade.

Only Johnny “wasn’t very good” at touring. Instead, he’s spent the past five years working with Josh ‘Addicted to Bass’ Abrahams and writing two novels (“I wanted to do something where I could never leave the house again”). It’s his David-Mitchell-meets-Tarantino writing style that powers the magical realism of The Artful Escape.

“The story is about Francis creating a stage persona, so I felt he didn’t need to kill anyone to do that,” explains Galvatron, not unreasonably. “The characters didn’t have to be villainous, so I really wanted these strange otherworldly creatures that are wells of wisdom and insight throughout the world. You speak to nearly all of them, and the dialogue decisions you make will go into shaping your persona.”

Moving through the world, which recalls Nathan Stapley’s art for Broken Age but also the psychedelia of album covers in the ‘70s and ‘80s, you’ll interact with these animalia. Through dialogue and puzzles, you’ll come to record their warbling – building a growing bank of samples to draw from in dual stick rhythm-action boss levels.

There’s more than a little spectacle involved in those. Francis performs Freddie Mercury-like moves to trigger lightning – igniting pyrotechnics around the scene. And as he plays, the animalia he’s sampling appear in holographic form as part of the stage show. 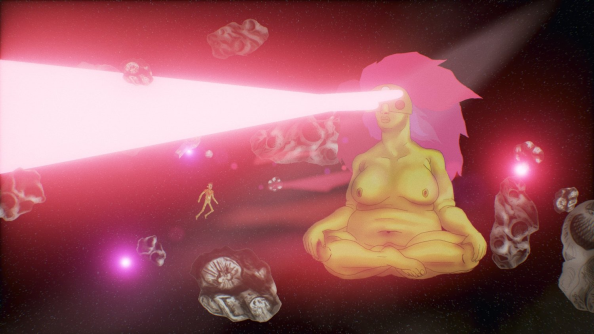 “You ever play Sniper Elite?, asks Galvatron. “You know the moment when you line up a shot and the camera pans around and follows the bullet? You’re not doing anything, but it’s immensely satisfying. When we do these rhythm games we’re looking for a combination between two things: simple, powerful mechanics and swift, technical ones.”

Virtuosic though it sometimes is, The Artful Escape is also a game about atmosphere, made in admiration of Kentucky Route Zero and Gone Home. In particular, Galvatron is keen to exploit the medium’s potential for slowburn set-ups.

“I think a game that does that terribly is Far Cry 3, where there’s this short video of all your friends and then you have to go save them all,” he says. “But I don’t give a shit because you just showed me, like, a Jersey Shore video and I’m supposed to risk my life for these people.” 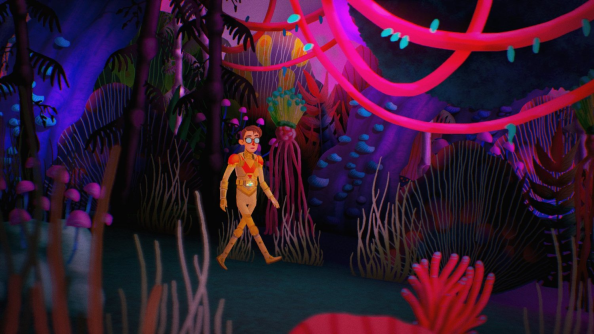 Galvatron talks about gaming’s potential for the “ultimate crescendo” – a transcendental melding of mechanics, story, music and cinematography. Sting once said something similar about rock ‘n’ roll being a bastard medium – a place to piece inspirations together, into music that becomes more than the elements it samples from.

There’s a pause. And then Johnny Galvatron says: “I played a gig with Sting once…”

The Artful Escape of Francis Vendetti will come to Kickstarter on March 1st. Unreal Engine 4 development is now free.

In this sponsored series, we’re looking at how game developers are taking advantage of Unreal Engine 4 to create a new generation of PC games. With thanks to Epic Games andBeethoven & Dinosaur.