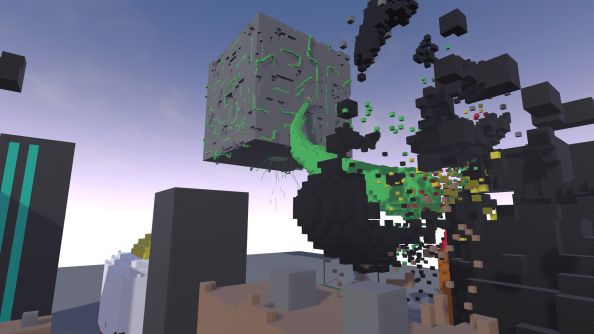 Moments ago a man was in his living room, but now he’s stood in a grey, blocky bathroom with chequered tiles on the floor. In the corner, voxels pour from a tap into a chunky bath. The room is roofless beneath a blue sky, and looking up past the boxy birds, the man finds he can draw a rectangular frame in the air. Expanding it to about fifty feet in height, he releases the Vive controller’s trigger, and teleports instantly to fill the new space.

Love sandbox games? The ones in our dedicated list are as sandy and boxy as they come.

He’s looking down now on a Minecraft-like green landscape, overlooked by a snow-tipped mountain and waterlogged by a river overflowing its banks. Following the river to its source, he teleports himself to the peak and peers at the distant bathroom – a blip of domesticity in unspoiled countryside. Picking a colour from a palette board on his arm, he draws a blue swirl in the air which becomes a physical object made up of thousands of tiny voxels. And shrinking further still – to the size of one of the world’s blocks – he’s able to cut into that object, defining its shape in minute detail.

When describing SculptrVR’s player tools you end up pointing not to Terraria or The Sims for comparison, but professional editing software like Photoshop. That wasn’t the starting point for creator Nathan Rowe, though, so much as the things other sandbox games weren’t doing.

“Minecraft is so limiting – and it had to be, to have an intuitive, easy interface,” says Rowe. “It’s hard to do 3D with a mouse and keyboard, and they struck on something that anyone can do but then expands to allow you to build these massive worlds.”

In Sculptr you’re swapping mouse and keyboard for the Vive’s room-ambling VR kit. With six degrees of freedom and the ability to accurately place your hands, dropping single blocks into the world suddenly seems ludicrously simplistic.

“Minecraft needed to start you off with a pre-existing world that you added to because you couldn’t have built the world yourself. That would have taken all of your life,” Rowe points out. “I’m avoiding procedural worlds because I don’t need them. In SculptrVR you can very easily – because of the scaling – build an entire world and then shrink down and be inside it and spend an hour walking across it if you want.” 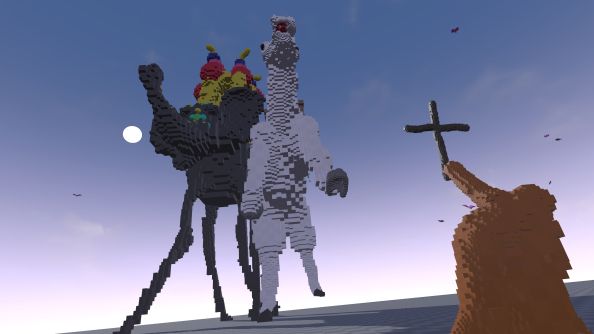 Originally prototyped in Unity, SculptrVR moved to Unreal Engine 4 to take advantage of a C++ backend capable of running its world-editing at 90 fps. Rowe calls his project a “sculpting application” – designed to let you build solid 3D objects just by waving your hands about. His background is in building and writing software for 3D printers, and as such, anything created in SculptrVR can be exported and printed as a 3D graphics-standard .OBJ file.

It’s a fascinating tool, with its placeable spheres, scatter brushes and physics particles; its tiny hand rockets that act as erasers. But Rowe would like it to be a game.

“Right now, people are using it to build worlds and that’s what I’ve encouraged them to do,” he says. “So that when I add game modes, you can play games in all sorts of weird handcrafted worlds.” 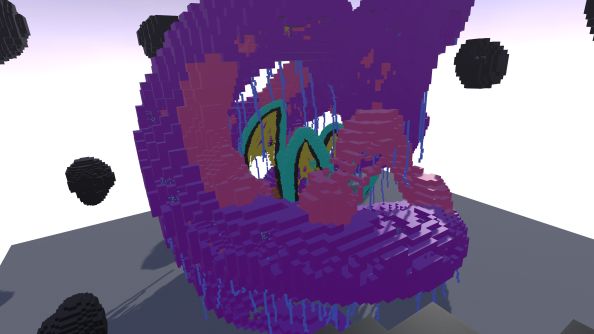 Rowe has a bulletin board full of mode ideas, and every one of them excites him. Exploration will be a central theme – albeit with a slightly less powerful teleporter. Also: Worms.

“Tons of people have tried to make 3D Worms and have failed because 3D input is just bad,” Rowe argues. “But we finally have good 3D input and I have a data structure for a destructive world, so I think it would be super cool to play a turn-based game with five or four people. Where each person gets two minutes then passes the headset – firing a missile or throwing a grenade, [leaving] craters in this beautiful world made by some stranger online.”

Even now, however, before Rowe’s done any intentional game design, SculptrVR is proving to be plenty to play with. 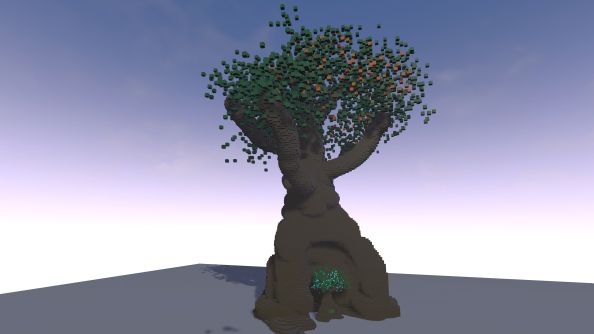 “The first day I put the scaler in somebody else’s hands, a woman built herself a kitchen in a house,” he remembers. “She refused to scale for a bit and instead crouched down to go underneath a table. She built a teacup and teapot and then she stood back up and shrank herself down to be among the teapots. She had the biggest smile on her face. I guess she loved Alice in Wonderland.”

SculptrVR is in available on Steam. Unreal Engine 4 development is now free.

In this sponsored series, we’re looking at how game developers are taking advantage of Unreal Engine 4 to create a new generation of PC games. With thanks to Epic Games andNathan Rowe.