I’ve been spending a lot of time rearranging the borders of Europe, lately, in Europa Universalis IV – which is wonderful, by the way. Even though Paradox Development Studio has added a little more direction to this installment with the inclusion of missions, it’s still a game driven by player-made goals.

Looking for some weekend entertainment, I decided to take the reins of The Serene Republic of Venice, and mold it into a Renaissance version of the Roman Empire. So, on this fine Sunday evening, put up your feet, and enjoy a spot of schedenfreude, as I regale you with the tale of the man who would be Caesar, but actually ended up ruining Europe.

Picking Venice is an easy choice. We’ve got history, she and I, but more than that, the Republic is in a strong position. Wealthy, not a slave to the Holy Roman Empire and with inroads into Eastern Europe and the Middle East – Venice starts off as an attractive prospect.

The first few years of my rule see me consolidate my existing powerbases. Nationalists in Dalmatia and Crete, along with some religious dissidents, were kicking up an awful fuss, so I spend some of my monarch power, generated by the Doge’s stats, to homgenise my holdings. It wasn’t long before everybody under my rule was Lombardian and Catholic. Sure, that makes the Republic a wee bit boring, but it’s also nice and peaceful.

I’m eager to end the peace after a couple of years. A few wars are in order, swallowing up the tiny states that make up what would eventually become Italy, but there’s one problem. One very big problem: The Holy Roman Empire. Milan is looking like the most choice morsel at the moment, but if I declare war now, the HRE would instantly cross into Italy and demolish me. This is not something I want. 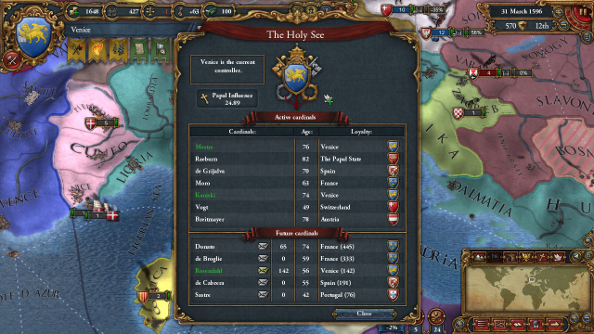 I decide to charm the pants off Hungary. An alliance with Hungary comes with several benefits: she’ll be a handy friend once I start extending my power does the Adriatic, taking chunks out of Bosnia and Serbia, but more importantly will be excellent backup when I inevitably clash with Austria – her rival and leader of the HRE. Conveniently, the seat of the Doge is up for election, and I select the diplomatic candidate. He probably has the most flamboyant hat, and his jokes go down a storm at parties. Visiting Hungarian dignitaries are sure to love him.

With Hungary eating out of my hand like a delighted puppy, I start building the core of my army. Venice has some lovely mercenary bonuses and lots of cash, so a hired army is a viable option, but their morale isn’t as high and I don’t want to burn all of my money in one war. I train 10,000 soldiers, and then hire a few mercenary units just as backup. While the hired help are getting drunk and flirting with women in Venezia, I send the bulk of my forces west, to the border Venice shares with Milan. It’s war time.

I’m immediately informed that Austria has declared war on me, just as I anticipated. I take a risk and ignore the 15,000 Austrians marching south, pushing my men into Milanese territory. Milan’s got a pitiful force, and I dispatch it without breaking a sweat. I split up my army to sit on all of Milan’s holdings, ensuring that she doesn’t start putting together a second army. Back home, Austria’s already locked down two of my provinces, but I spot a vast Hungarian army marching towards them – I breath a sigh of relief.

The war lasts for two years, and while I’m unable to completely annex Milan, I do manage to take all but one of her provinces. I also manage to talk the Austrians into giving me many bags of gold. This has been a good war. My aggression has made me no friends, however. Ferrara and Mantua are now positively terrified of me, Savoy keeps sending me rude letters and the Pope called me a meanie.

Before I can bring down my war exhastion, Bosnia decides to declare war. This time I don’t have to worry about more powerful nations getting involved, but I’ve not been able to stabilise my economy since the last war, so I end up with a defecit and take out some loans. Bosnia quickly surrenders after I slap her soldiers around a bit, and I could simply take a chunk of money and prestige – but I’m feeling vengeful. I strip her of three provinces, enraging just about every nation nearby. 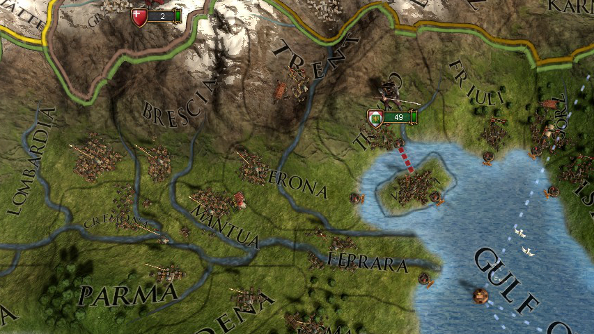 I’m now utterly dominating the Adriatic, but everyone hates me. Hungary gets very upset with me for nicking all of those Bosnian provinces, ending our alliance, and my new citizens think I’m the devil. Some of my old ones agree. The next few decades see me juggling countless rebellions and opportunistic enemies taking advantage of the disarray. I’m eventually able to get back on track, but my inflation has skyrocketed and I’ve lost Crete, the ungrateful buggers.

After all the bloodshed and economic mishaps, I decide to let peace reign for as long as possible. I mainly build stuff. Lots of lovely temples, fields for my wee soldiers to play in, a fortress or two – it’s like a dream come true for Venice’s many builders. I’m almost ready to start conquering the rest of Italy when Serbia tells me that it thinks I’m a bit shit, and promptly declares war. It’s like the fates are conspiring against me.

Okay, Serbia, you’ve pissed off the bull and now you’re getting the horns. My men charge into Serbia, annihilating the nation’s pathetic single army. I ignore every plea for peace, refusing to give up until the entire region is mine. When I’m satisfied, I send in one of my friendly diplomats with a letter from the Doge:

With Serbia now a vassal, I’m feeling pretty good. Her troops will always aid me in battle, and she serves as a buffer between me and the increasingly powerful Ottoman Empire. Yet this unforseen war forces me to sort out my economy once again, as well as requiring me to prostrate myself before other nations that were a bit miffed that I’d conquered a country absent any war goals.

I’d expected to rule all of Italy at this point, but I had not even annexed a single Italian state. In fact, the likes of Naples and Savoy are now in a coalition against me, alongside the blasted Austrians. Hungary isn’t really a fan of Venice anymore, and has problems of her own to deal with, and there’s no way I can fight all of Italy and the HRE all on my lonesome. 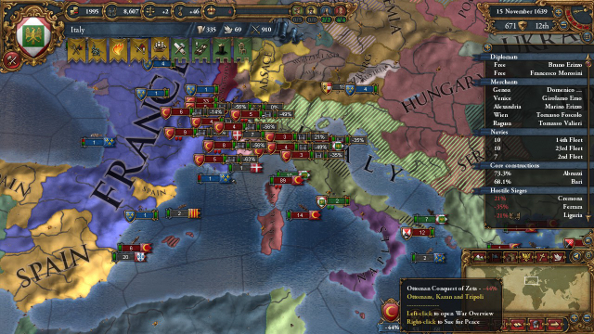 I look to the west, to France. She’s taken half of Spain, a chunk of Portugal, brought her vassals into the French state and has even started spreading throughout Africa and the Americas. There was no doubt about it, France was a superpower. As it turned out, the French also thought quite highly of us Venetians.

An alliance between France and Venice? Think of the trouble we could start.

And what trouble! The Franco-Venetian alliance finally let me spread my wings. War after bloody war, and nobody is able to stop me. Austria is nearly wiped off the face of the map, and one by one Mantua, Milan, Ferrara and the Papal State fall to my mercenary horde. My war-mongering comes at a cost, however: I’m flat broke and positively lousy with rebels.

Italy was united, though, and I was back on track to reform the magnificent Roman Empire. Then the Ottomans happened. Out of the east emerge countless armies, more men that I’d ever seen in battle. Serbia falls, then Hungary, the Holy Roman Empire – now led by Bohemia – flee and the French armies are torn apart. Even though I essentially run the Catholic Church, after spending Papal power acquiring multiple cardinals, I can do nothing. A crusade is a bit useless when everybody is dead.

I have no more men to fling at the unstoppable Ottoman war machine, and rebel armies now inhabit every single one of my provinces. In fact, they are doing more to halt the Ottomans than I am. The dust settles, and things couldn’t be worse. France is buckling under its own weight, the HRE is in chaos, Eastern Europe is no more – now just the western tip of the Ottoman Empire – and most tragically, the nation I spent 400 years building is gone. The Kingdom of Italy is merely a small handful of impoverished provinces, squabbling with the states she once ruled.