Like many people whose passions could be considered ‘nerdy’, I have two notable circles on a Venn diagram of my interests: Marvel comics and videogames. It’s not often that they overlap, but on the occasions they do my interest is immediately sparked. Generally, the intrigue lasts a fleeting few seconds (Marvel Puzzle Quest is not what I’m looking for, sorry), but things are different when it comes to Marvel vs Capcom: Infinite. As a big game with flashy effects and several of my favourite characters, it’s certainly on the right track.

There’s one problem, though: I don’t play fighting games.

Why are there no X-Men in Marvel vs. Capcom: Infinite? Because you don’t remember them, apparently.

Is that enough to stop a Marvel fan playing MvC: Infinite, though? That’s the question I go into the game seeking answers to. And, almost immediately, the answer arrives: yes. Marvel vs Capcom: Infinite may be the most comic book game I’ve ever played, for better and worse. 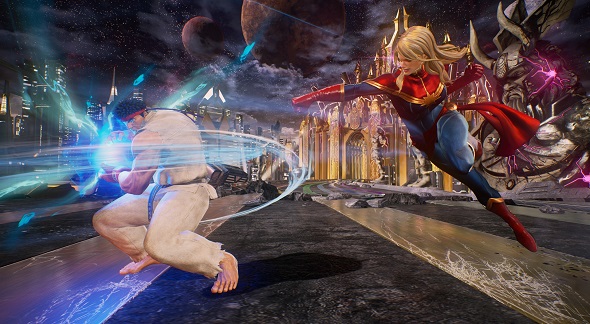 Marvel publishes hundreds of comic issues every year. As you can imagine, of those many chapters, few of them are groundbreaking, memorable stories that belong on every fan’s bookshelf. Indeed, the bread and butter of comic writing is based in tropes: heroes going through increasingly familiar trials, defeating villains with cookie-cutter world domination plans. Comics have made an art form of this, the cliches happily embraced by fans. Largely, these storylines are something the Marvel Cinematic Universe has attempted to stay away from, mostly by cherry-picking the best arcs from decades of storytelling. Marvel vs Capcom: Infinite, however, relishes comic tropes.

Within the first hour, Infinite throws you into an event that is barely explained. Good start. It then sees fan favourite heroes team up to defeat multiple faceless bad guys, transforms good guys into bad guys, and has Captain America and Iron Man beat seven bells out of each other over the moral value of a key plot beat. Pretty much every five minutes a new character is thrown into the mix, which to an outsider may seem like the fan fiction of an over-excited child, but in reality is exactly the fabric from which Marvel crossover events are stitched. 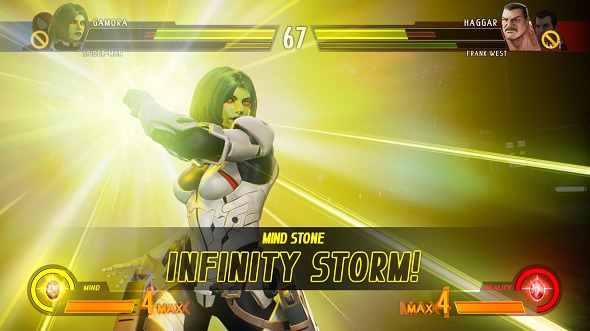 As the Infinity Stones and Thanos are introduced to the narrative, I find myself increasingly enjoying MvC’s absurd story. It’s cliche loaded on top of cliche, written with no sense of shame. It’s not as worthy as the story of DC’s Injustice – a narrative so comic book in its realisation that it actually /became/ a comic book – but it’s clear the team behind MvC: Infinite love the medium from which they draw 50% of their lore and lineup.

The plot, of course, is told entirely through alarmingly frequent cutscenes, thanks to the fighting game genre’s complete inability to tell stories through gameplay. So how about the fights themselves? Can a player drawn in solely by the Marvel license enjoy the scrapping? 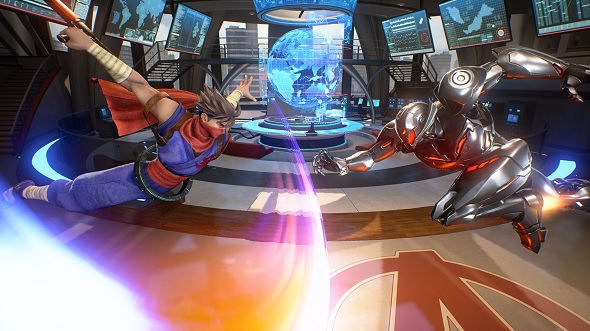 From what I understand, Marvel vs Capcom: Infinite has a complex fighting engine that really comes into its own when playing against others. For the story, however, it appears that concessions have been made to ensure that it is completely accessible even for those with no idea how to trigger a Hadouken. Without even reading a tutorial screen I have Captain America diving across the screen, pulling off signature gymnastic moves, and hurling his ricocheting shield. I can’t help but grin as, with the press of just two buttons, Carol Danvers bursts with golden energy and obliterates half the health bar of my opponent. Simply button mashing brings comic panels alive on the screen, and within a few minutes I’ve worked out how to string together blows that make the arenas explode with neon lighting effects. This is much easier than I ever expected.

Admittedly, it can’t hold a candle to the Arkham games and their practically flawless handling of allowing the player to embody Batman. There’s more to these characters than their fighting skills, and Infinite has no way to communicate that; you won’t get to choose the perfect sniper nest as Hawkeye, or swing through Manhattan as Spider-Man. But for pure one-on-one fantasy fight sequences, akin to the Vs. issues of Avengers vs. X-Men, Infinite certainly has the right spandex on. 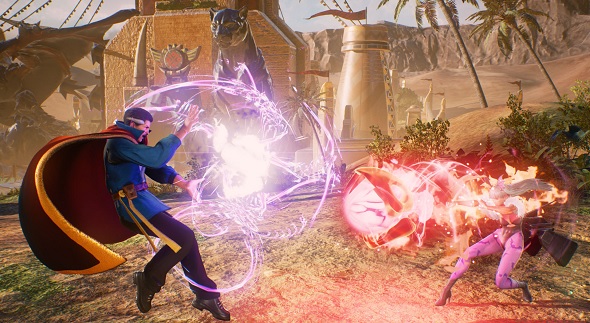 The Capcom side of the equation muddies the waters a bit. They’re clearly out of place alongside the Marvel characters, but their presence does increase the game’s exaggerated sense of not being aware of its own stupidity. The Umbrella Corporation exists in this merged universe, but is combined with Marvel’s A.I.M. The result? A.I.M.BRELLA. It’s the perfect fit for a universe that managed to name its two key defence forces S.H.I.E.L.D and S.W.O.R.D. with barely even a knowing wink.

If Arkham Asylum is Jeph Loeb and Tim Sale’s essential The Long Halloween made videogame, Marvel vs Capcom: Infinite is a filler cross-over story from the 1980s that you’ve read once and confused with seven other comic arcs since. But that’s its appeal – along with the fact that you can make fights come alive with just a few, uncomplicated button presses, of course. It’s perhaps not a game to recommend to every Marvel fan out there, but if you’ve got a collection of singles held in plastic wallets, you’ll certainly find something to love among its absurdities.