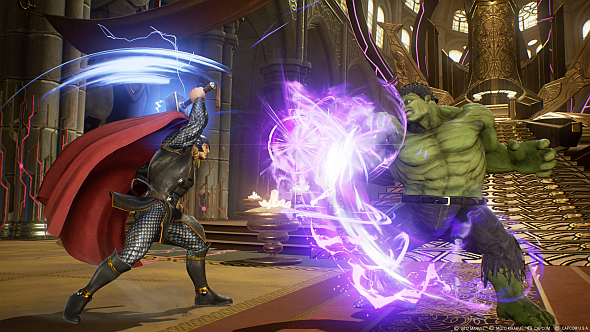 Contrary to the universe-meets-universe theme of Marvel vs. Capcom: Infinite, the forthcoming fighting game will not support cross-platform play, so you won’t get to knock the stuffing out of your console friends. That marks a departure from Capcom’s last fighting game, Street Fighter 5.

See what else there is to look forward to in our list of exciting upcoming PC games.

The news was confirmed by Capcom producer Mike Evans in an interview with VG247. Asked if we can expect to see similar features to Street Fighter 5, he says: “Street Fighter 5 is cross platform play and Marvel vs Capcom Infinite will not be,” though he does reiterate that “we’re taking a multiplatform approach, so Xbox One, PS4 and PC.”

Evans says Capcom are trying to improve the Capcom Fighters Network in SF5, but given the troubles in getting different platforms to interact smoothly, “we decided that for Infinite it’s just a better approach to try to get it into as many hands as possible on day one so that tons of people can enjoy it.”

The interview also features associate producer Peter ‘Combofiend’ Rosas – something of a legend in the Fighting Game Community for this triumphant comeback – and touches on a number of other topics. These include balancing accessibility with depth, the potential for esports growth, Capcom’s relationship with Marvel, and expansion and DLC plans.

Check out the full interview over on VG247. It’s worth a read.