Near the beginning of Avengers – sorry, to be clear, that’s Marvel’s Avengers, the videogame – Thor lifts up a bit of steel that’s pinned a civilian to the ground, and says “Lucky for you, I am mighty!”

That line, though it’s brief and lifted from the Age of Ultron film, has cast a shadow over my expectations for Avengers ever since the prologue footage first released. The delivery is all empty machismo. It comes in the midst of an extremely scripted action sequence, where you alternate between all the Avengers and basically just mash ‘X’ a bunch between each cutscene. Would the Avengers game just be a big-budget button-masher where a bunch of comic book pastiches yell extremely silly dialogue at one another?

Avengers isn’t (quite) a button-masher, and there’s a lot more heart to its vision of the titular hero squad than first impressions might suggest. I’ve been made to care about this particular iteration of superhero group, and that bodes well for the game’s long-term service plans and episodic story updates. Perhaps most importantly, this is a surprisingly deep action-RPG that’s both challenging and rewarding. It’s a terrific foundation with a lot to enjoy right now. Or rather, it will be – once a host of frustrating technical issues are ironed out.

After a disaster at the end of the opening mission, Captain America is presumed dead. Bruce Banner no longer believes in the mission of the Avengers, and has told the world the group is a danger to society. Iron Man, feeling betrayed, retreats to a hippie life on one of his many estates. Thor has disappeared, and Black Widow is – well, ok, she’s basically still doing Black Widow things. But that version of the Avengers we saw at the prologue, the one spitting corny one-liners – that’s the past. Now, every former member of the team is dealing with that collective failure in their own way.

Every hero has a unique job to do, so they each get a moment to shine

It’s not long, of course, before everyone is suited up and blasting bad guys with lasers and magic hammers, and this is still a world where problems are ultimately solved by resolving to do heroism and then punching unambiguous villains in the face. But there’s just enough meat to the interpersonal drama among the team – and weight in the performances – to add some emotional stakes to what’s otherwise a lightweight sci-fi story full of silly contrivances to push the plot along. 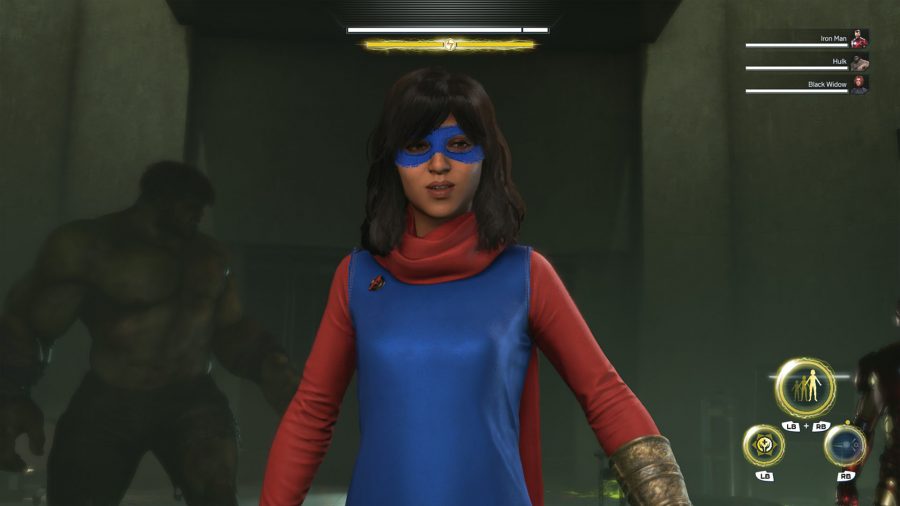 Kamala Khan – or Ms Marvel, if you prefer – is why it works. She’s a (mostly healthily) obsessed fan of the hero squad, and her self-assigned mission to reunite the Avengers forces her to regularly push past her social insecurities. Her extremely awkward heart-to-hearts with the rest of the cast pull the story together, and add just enough emotional stakes to make the whole crew worth caring about.

As much as the story is about a group of individuals with diverse abilities pulling toward a common goal, the in-game action does the same thing – and that’s maybe the most impressive part about Avengers. Every character slots into a similar formula with a similarly broad set of abilities: everyone’s got a light melee attack, heavy melee attack, ranged attack, defensive move, dodge, and a meter that you use for certain special moves. Picking up a new character is never going to feel like picking up a new game, because everyone is building on the same template.

But within that template, each Avenger gets a unique suite of abilities that gives them a unique role in combat. Ms Marvel has a set of melee attacks that let her do some light juggle combos with her massive, stretchy arms, and she can spend her meter energy to enter an embiggened polymorph mode for extra damage and automatic dodges against incoming attacks. She’s a great all-around fighter and support. Hulk can unleash big area-of-effect damage using just his basic attacks, and spends his meter for brief periods of invincibility and health regeneration. He’s a tank. Black Widow can only fill her damage-boosting meter by landing attacks without taking damage herself. She’s a precision DPS. 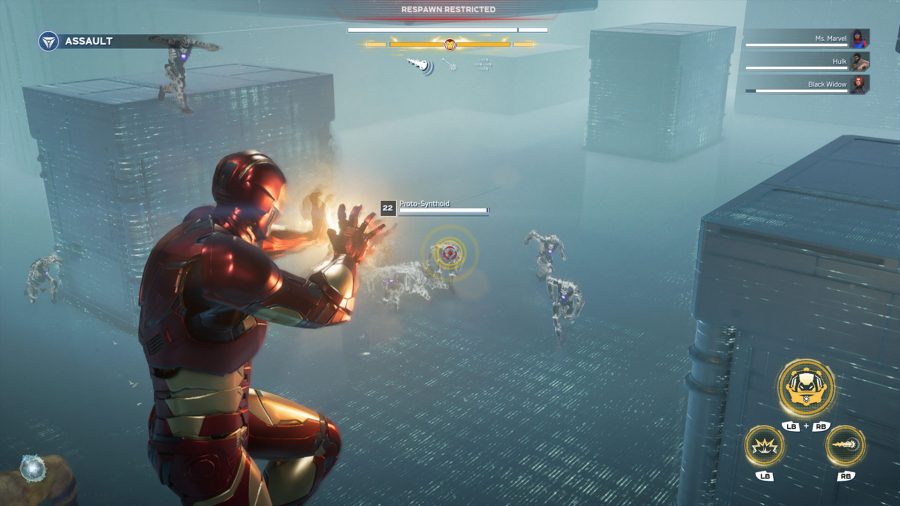 Each character gets their own combat role within the context of this larger, universal gameplay system. You might have a Hulk player smashing into crowds and causing as much chaos as possible while soaking up damage. Iron Man will be flying overhead, launching ranged attacks to pick off those hard-to-reach stragglers or snipers harassing everyone in melee, occasionally dipping in for a few punches to build that ranged meter up. Black Widow will be engaged in a heavily counter-driven one-on-one duel with some especially dangerous foot soldier, taking that pressure off the rest of the party. Every fight feels like a proper, cinematic Avengers battle in which each hero has their own job to do, so they each get a moment to shine.

Those fights are surprisingly demanding, too. Enemies are happy to swarm you, and you’ve got to choose your targets quickly and with care or you’ll get lost in the melee scrum as AoE attacks pour in from all sides. You won’t build any Devil May Cry-style combos, but Avengers does require you to pay close attention to your meters and cooldowns, make smart use of your abilities, and carefully counter attacks to open up the bad guys, or you will get stomped down.

Related: Check out the best MMOs and MMORPGs on PC. Can I run it? Check the Marvel’s Avengers system requirements at PCGameBenchmark.

Aside from a handful of the most scripted story missions, Avengers is built around four-character squads. When you play solo, you can choose which AI Avengers will join you in a given mission. Each character has their own progression of skills and gear with Destiny-style power levels, and you can only level them up one at a time. If you want to truly play solo past the end of the story, you’re going to have to slowly grind up the power of at least four of the six available characters, or risk each mission with a squad of underpowered teammates. 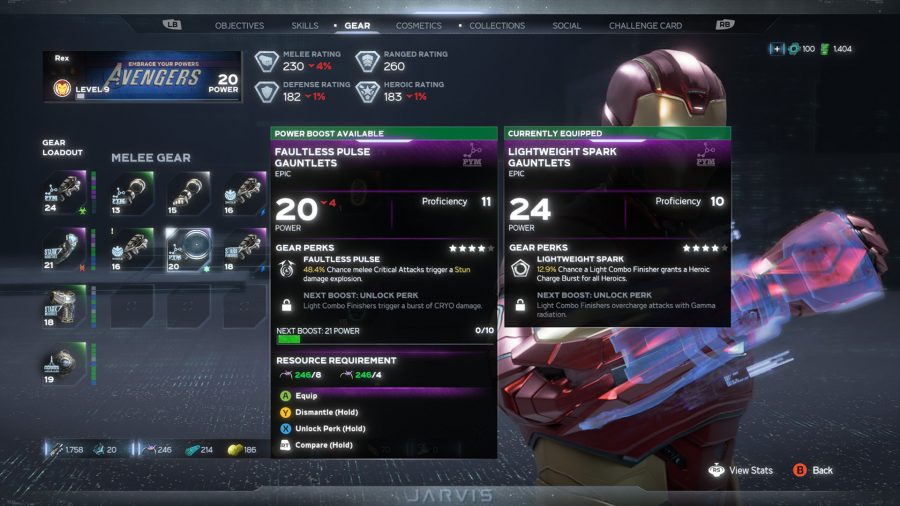 The AI is generally competent enough to take the pressure off of you in major encounters, but you’re still going to be the most important fighter in those battles. While Avengers makes plenty of allowances for those who want to play solo, the tougher post-game encounters just aren’t practical to complete without playing in co-op. The post-game ‘Avengers Initiative’, where you’ll find all the more challenging, repeatable content, is billed as the multiplayer segment of the game – and even though the multiplayer is technically optional, you’re going to have a bad time playing solo after the credits roll. (One of the most frustrating solo caveats is that certain characters can’t smash through the breakable walls which hide powerful loot. If you’re playing as, say, Black Widow, there segments of each level that will be completely inaccessible to you without a human partner playing as someone like the Hulk.)

If the devs can deliver on their long-term plans, Avengers is going to be the perfect comic book game

It’s lucky, then, that matchmaking is quick and painless, and the repeatable missions offer a satisfying loop similar to a Diablo dungeon dive, just within the context of a more intricate third-person action combat system. The content can be repetitive – you’ll already have battled through the same handful of AIM laboratories multiple times over by the time you’ve even finished the main story – but the combat is so tight and the combat roles of the varied heroes interlock so satisfyingly that the repeated runs feel compelling. The hooks have set in for me. I want to finish those dailies to unlock the next silly Hulk costume on the battle pass. I want to check in again tomorrow for another quick mission that’ll get me closer to either more power, or an even sillier shirt.

Those hooks have, however, occasionally been slapped out of my mouth by a range of technical issues at launch. I’ve had multiple hard crashes – some have been random, while others occur at specific scripted moments, only allowing progress when you turn down the effects settings. Mission checkpoints don’t save when the game closes entirely, so a crash could mean up to 30 minutes of lost progress – a frustration I’ve encountered multiple times over.

I’ve also seen multiple instances of enemies falling through floors, or getting trapped when the doors close on a big fight. That’s a major issue when you’ve occasionally got to beat every enemy in an area to progress, and while in every instance so far I’ve been able to use long-reach attacks through walls to avoid restarting the checkpoint, that’s not something I should have to worry about.

There are sillier visual bugs, like a specific Captain America costume that usually turns his face into a Garry’s Mod meme, or an NPC whose hat and hair would sit on the ground, turning left and right in time with her head movements. There are annoying UI bugs, where sometimes you have to hover over a bit of gear multiple times to see its stat readout. There are also game-breaking UI bugs, where sometimes the button you need to hit to select a mission just does not appear. 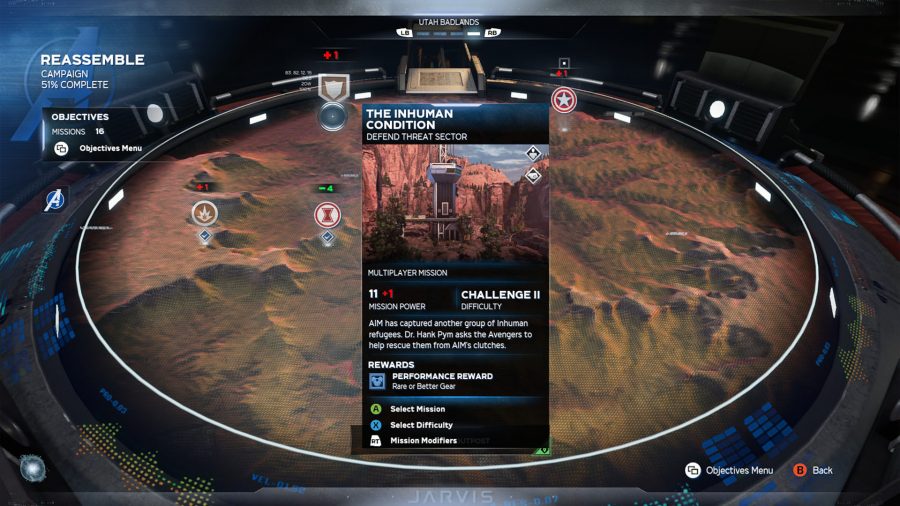 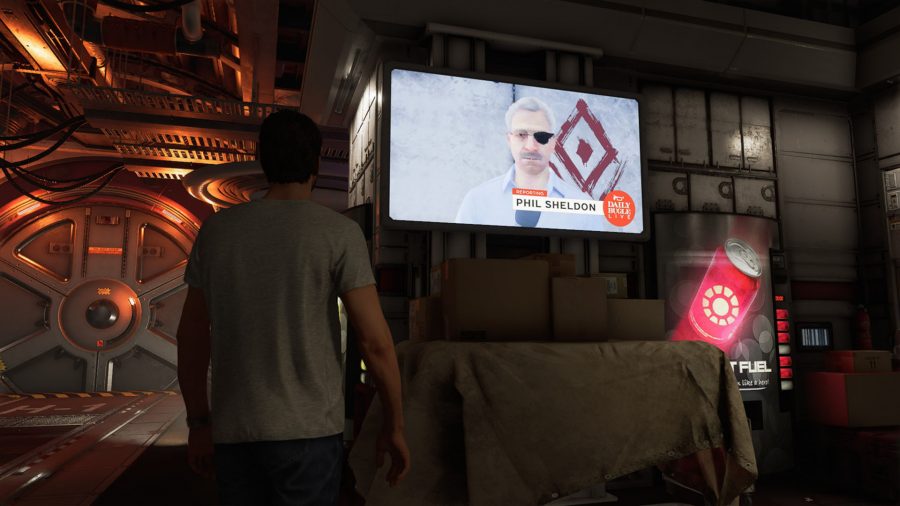 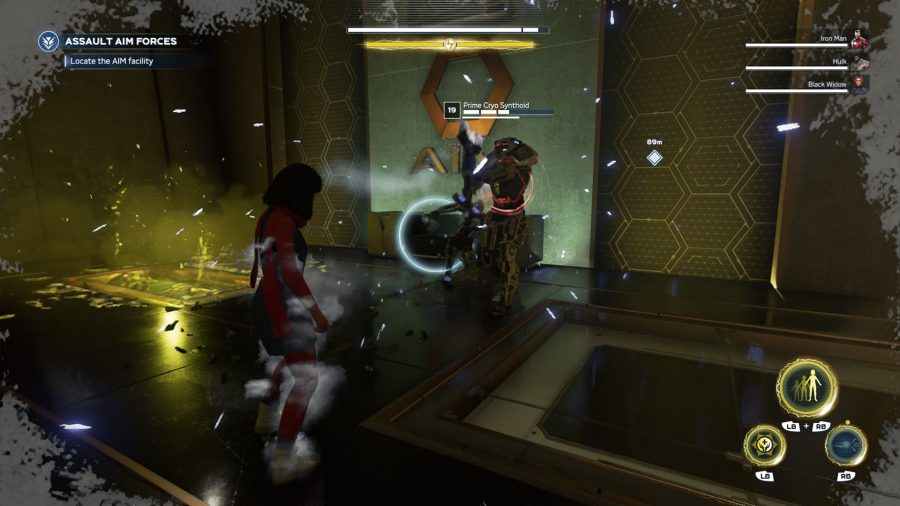 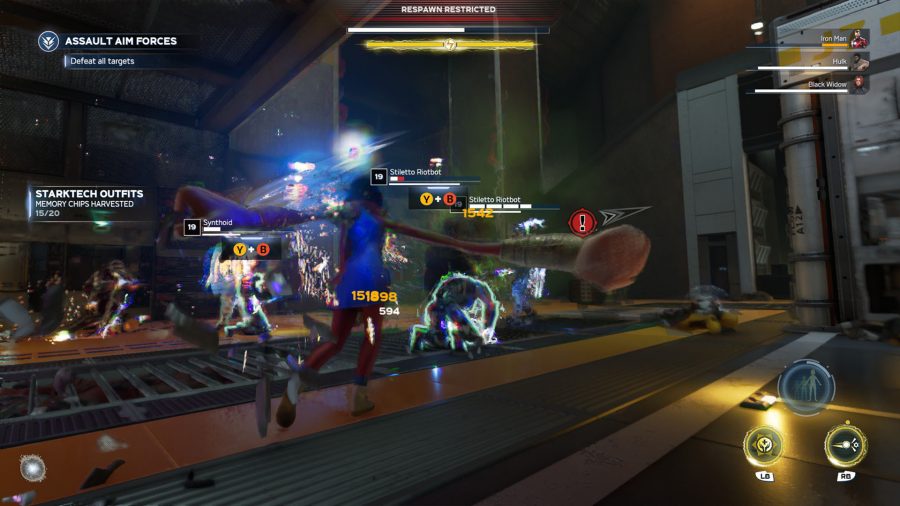 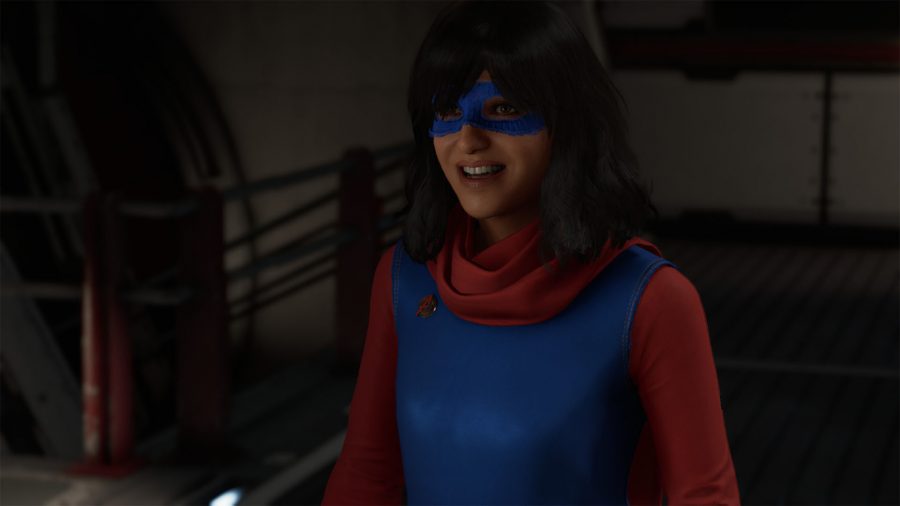 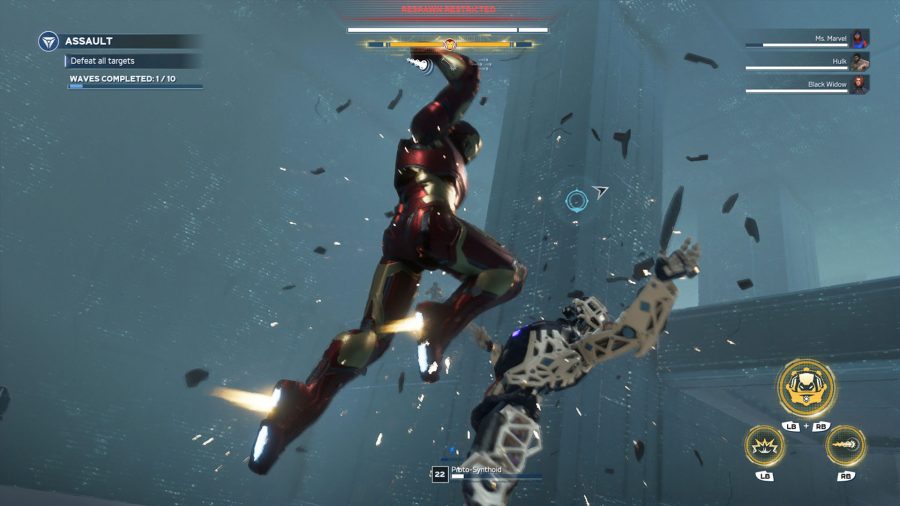 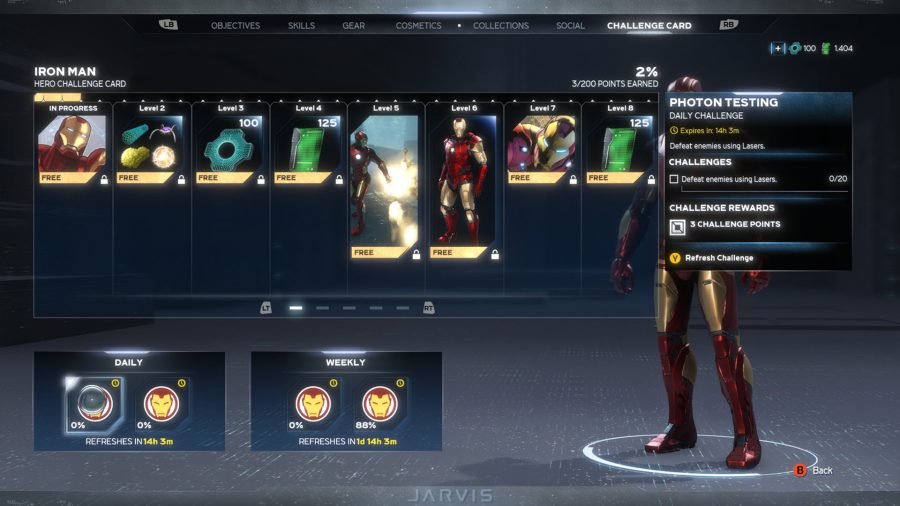 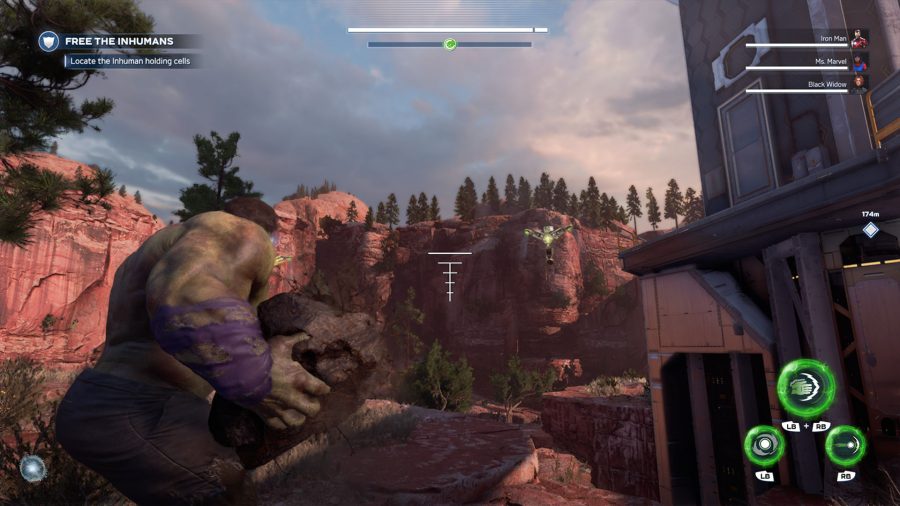 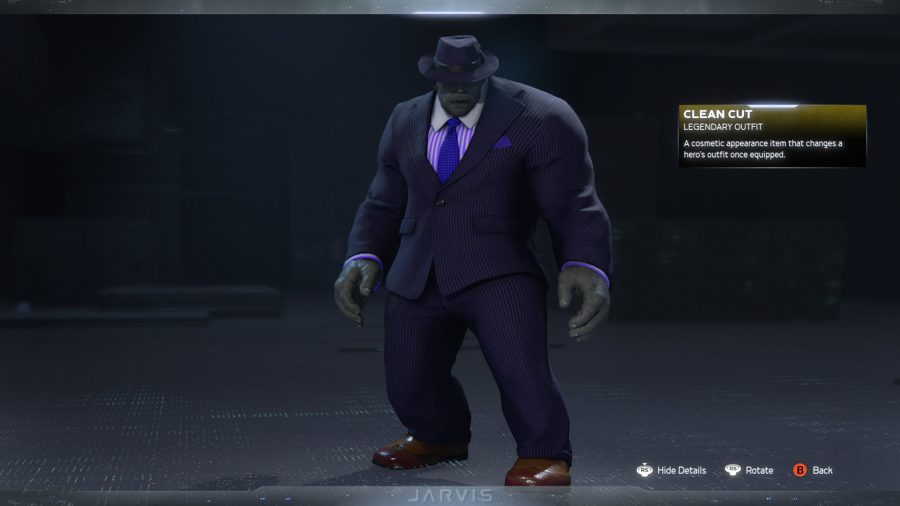 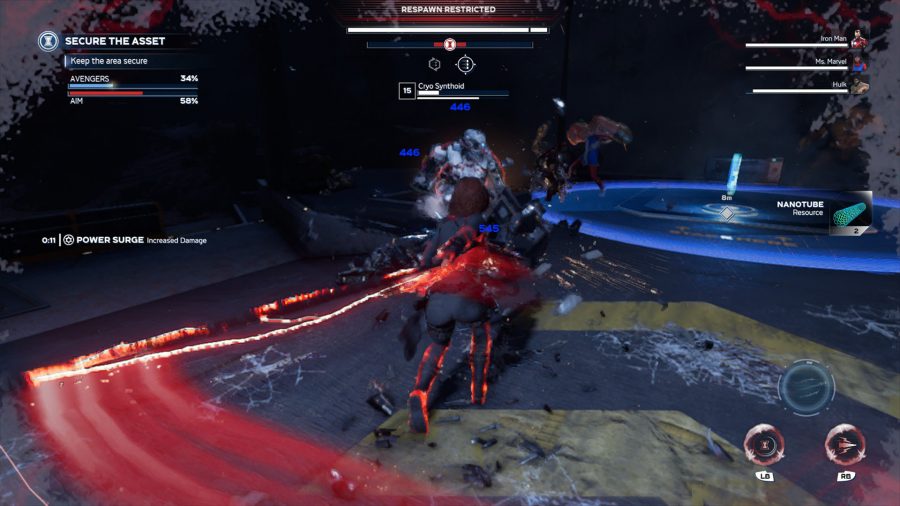 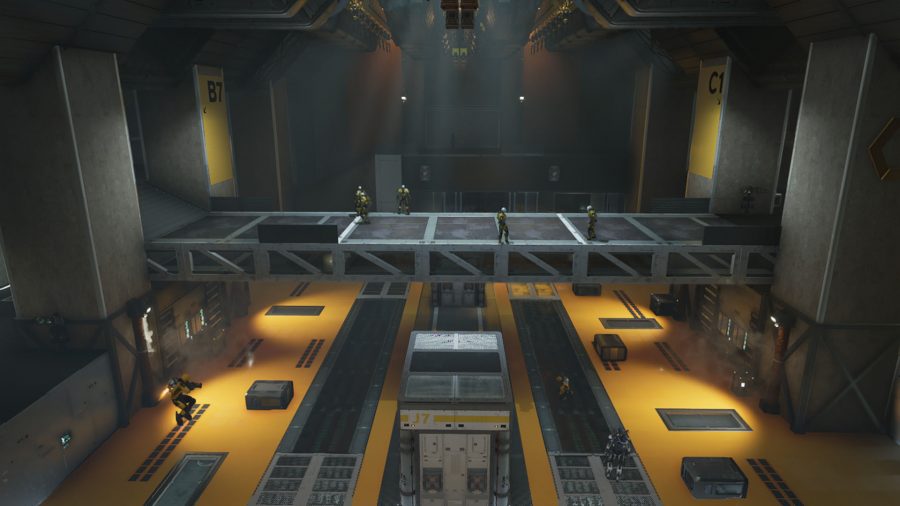 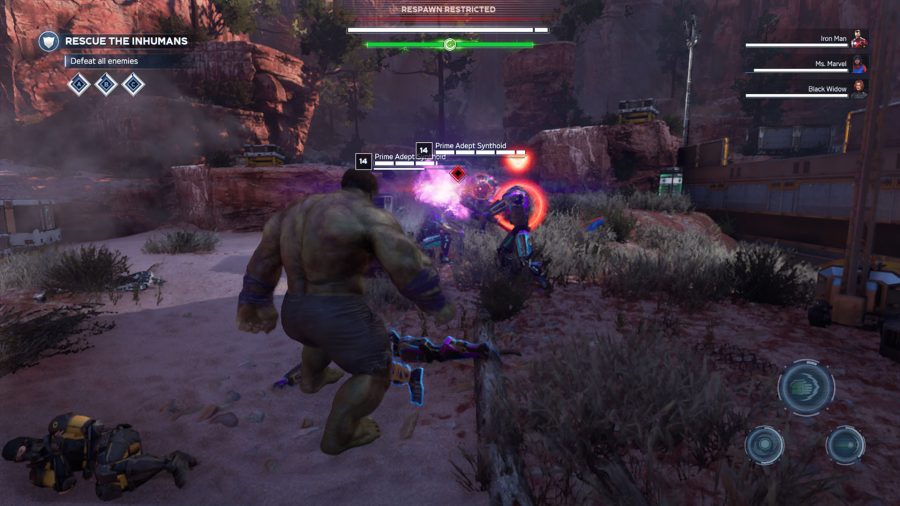 Those issues have gotten more frequent and exasperating the deeper I’ve played, but I like the game underneath those problems so much that I still want to keep playing even with this review now complete. This is a robust, challenging action-RPG that’s built an eminently likeable vision of the Avengers, and it’s one I can see myself sticking with in a way I haven’t with other modern loot games. If the bugs get fixed and the devs can deliver on their long-term plans for continued episodic content, Avengers is going to be the perfect comic book game – one where you’ll be able to regularly pick up the latest issue, see Captain America’s latest costume, and pummel the villain of the week in a regular dose of light adventure.

A range of technical issues are holding it back at launch, but a combination of satisfying combat and likable characters has delivered the foundation of an excellent superhero game.