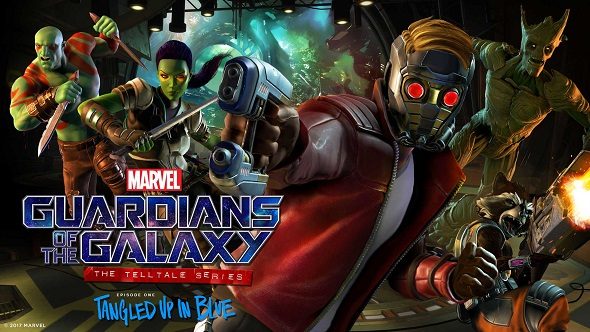 Update April 18, 2017: Telltale have released a launch trailer for the imminent first episode of Guardians of the Galaxy.

Telltale’s take on Marvel’s comic space opera is due to get its first episode later today, and to celebrate, perhaps the most eminent studio in narrative gaming have released a launch trailer.

To judge by the trailer, Telltale are aiming to recreate the same wacky humour of the comic and its hugely successful movie, but we know their story will be an original one (though it will pit the Guardians against Thanos, once again).

Here’s the Steam page for Marvel’s Guardians of the Galaxy: The Telltale Series. Episode one will be called ‘Tangled Up In Blue’ and will unlock later today – at 18:00 BST, to be precise.

Update March 30, 2017:Telltale have released a trailer for their upcoming Guardians of the Galaxy series, and you can watch it below.

I wasn’t sold on Tales from the Borderlands before that came out, but that ended up being the best thing Telltale have made. I’m kind of hoping for the same situation here, as that trailer doesn’t make it look great does it?

Not only is the art style weird, with characters looking like they’ve been imported from a bad FMV, but the humour is also from the past. I mean, elevator jokes, seriously?

Original Story March 28, 2017: Telltale’s latest movie tie-in series kicks off next month with the first episode of their take on Guardians of the Galaxy.

The first episode is called Tangled Up in Blue and will cost $4.99 to download from Steam, though you’ll be able to save a bit by going for the Season Pass.

Telltale released a couple of new screens, as you can see both in the header image above and this one right here:

Looks like the Guardians will be facing off against Thanos, then. There’s a trailer coming Thursday, so we’ll find out more soon.

Tangled Up in Blue goes live on April 18.