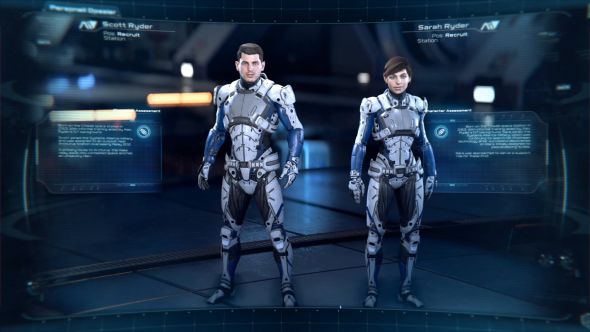 You’ll be able to choose elements of your character’s backstory in Mass Effect: Andromeda and even affect the appearance of your twin by customising your own, say BioWare.

For more on the crew with whom you’ll be exploring the new galaxy, check out our Mass Effect: Andromeda character guide.

Lead designer on Andromeda Ian Frazier confirmed the news in a tweet yesterday.

@The_Elder_King @proboards Ah, I see it has indeed gone public. Yes, I can confirm you get 2 choose the training Ryder had in the Milky Way.

We got a ton of new information on the new Mass Effect from twonew trailers yesterday, withthe secondgiving us a rundown of the starting team on the human ark, Hyperion. In that video, the two Ryders are given a “rough backstory”, to which Frazier says you’ll be able to add your choice of training.

Speaking with GamesMaster, BioWare also confirmed that if you customise your Ryder’s appearance, it’ll affect your in-game twin as your genetics carry across. GamesMaster say you can “give the Ryders a hereditary bum-chin”, if you like.

In the original trilogy, you could make two choices of background for protagonist Commander Shepard (your upbringing and your reputation), which were referenced fairly often in dialogue. We imagine your choices for Ryder will have a similar effect, but BioWare could be taking things further in Andromeda, as they seem to be doing for everything else.