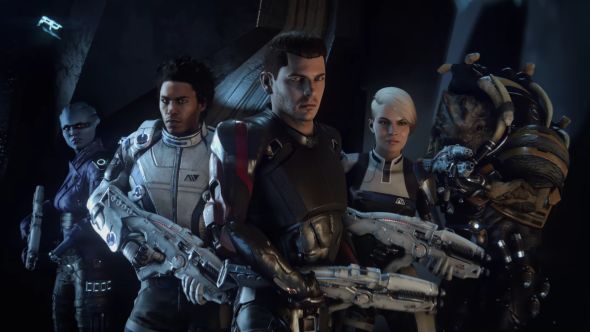 There’s a sleek white assault rifle, which looks something like a cross between an M-8 Avenger and an M-96 Mattock, in some of the Mass Effect: Andromeda trailers. Your squad wields it in the New Earth trailer, and it appears in the weapons briefing trailer.

You don’t need a prop gun to kick some Kett tail – learn how in our Mass Effect: Andromeda combat guide.

It stuck out to a number of fans (and news writers, looking for clues) pre-release, and many of us have been vaguely wondering where to get hold of it in the game. Twitter user Lifeless Galaxy went ahead and asked:

“That is the X5 Ghost,” says lead designer Ian Frazier, in response. “It was an early idea that became a prop, but doesn’t exist as a functional gun in the game. That said, several folks seem interested in it, so we’re investigating the possibility of turning the prop into a useable gun for a future patch.”

Last week, Bioware released a statement on the mixed reception to Mass Effect: Andromeda, acknowledging that some of that reception was critical. They promise to “share more of our immediate plans” for improving the game on Tuesday, April 4 – tomorrow. We’ll be sure to let you know what they say.