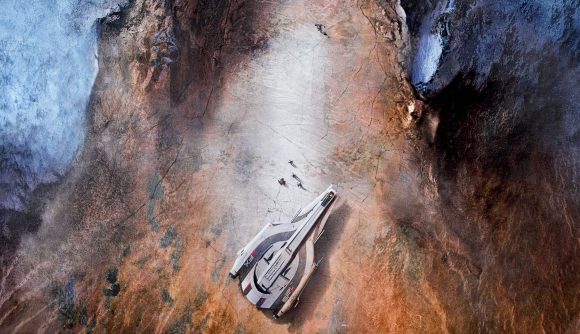 Geth a load of this, Mass Effect fans, you now have something to mull over for teases while you wait for more news. BioWare has revealed a new poster for the upcoming Mass Effect game to round off N7 Day.

The poster depicts a ship that’s landed on a planet, with the crew walking toward a crater. Fans were swift to point out that the different colours of the world make the landscape look like a big ol’ Geth face, which is a race of networked artificial bits of intelligence that hang out beyond the Perseus Veil, if you need a reminder.

There are a few other wee details you can notice if you zoom in, too. There are four crew members, and one of them appears to be a Krogan, which is another race in Mass Effect that seems big and brutish. If you look towards the crater, you’ll also see the remains of what looks like another Geth. If you’re more into your space crafts, you can get a good look at the ship, too, to see what that’s all about.

We have another #N7Day surprise for you from the team working on the next Mass Effect. 👀

Thank you all for being the best fans in the world! pic.twitter.com/kUwASGJhcx

Aside from the poster, N7 Day largely passed without fanfare. The Mass Effect Legendary Edition is on sale through the Steam, Origin, and Microsoft Stores if you don’t have it, and an officially licensed Citadel model is now on Kickstarter. BioWare has also released many fun facts about player choices, and apparently, 15% of you monsters didn’t let Garrus join your team. Awful.

We last caught a glimpse of the new Mass Effect game back at The Game Awards in 2020. That was just a wee tease, too, though it did give us a clue that we could be returning to the setting of the original trilogy.

If you’re looking for more space games to keep you busy while you wait, you can follow that link.