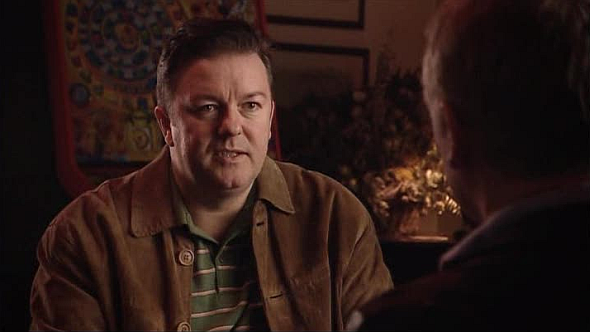 Whether it’s sweet-talking your way to an awkward sex scene, or deciding which basic aspect of galactic culture Commander Shepard should admit ignorance of next, you spend a healthy chunk of any Mass Effect game in dialogue scenes. Turns out, you can thank British comedian Ricky Gervais for the direction of those scenes.

This means Gervais influenced Mass Effect 2, one of the best RPGs on PC, however slightly.

4. The close over-the-shoulder camera style I used for conversations in Mass Effect was inspired primarily by Ricky Gervais's The Extras. This is not a joke – that entire series was built on awkward, close conversations. pic.twitter.com/YHHBqnucu7

The time when games were underestimated by anyone other than very old, closed-minded people has long since passed, but it’s always nice to be reminded of the many ways in which our hobby draws on ideas and techniques from other media, especially the less obvious ones.

Other highlights from Cooper’s thread include the ways BioWare tried to get around the ‘dead stare’ of animated characters in other games, and the story that the team’s first breakthrough in facial animation came after creating an in-game version of then-US president George W. Bush.

We also hear that BioWare used a system to procedurally generate animation during conversations, 70% of which were then touched up manually by cinematic designers. Presumably this is the same system that was partially blamed for Mass Effect: Andromeda’s infamous facial animations.