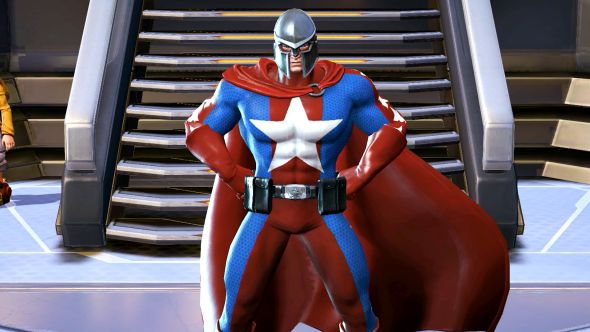 NCSoft West’s forthcoming MOBA, Master X Master (MXM), is about to open its doors to the public once more with a three-week beta test. During that test, you’ll get to play with a new character – Statesman, who returns from NCSoft’s 2004 superhero MMO City of Heroes.

Which MOBA is right for you? Let’s figure it out together.

The MXM beta will go live on April 6 and run for three weeks, wrapping up on April 27. Sign up and learn more at the MXM website here.

Statesman looks (and plays) like a cross between Superman and Captain America. As leader of the Freedom Phalanx and one of the first heroes of Paragon City, he was a major character in City of Heroes. In MXM, he will be a frontline tank, taking damage for his team and controlling the fight from the ground and the air.

“We decided to include Statesman to recognise the fans’ love and as a tribute to the franchise”, says Sean Corcoran, senior brand manager. “City of Heroes being part of our heritage was a perfect fit with how we have incorporated characters from several NCSoft titles in Master X Master”.

MXM is an action-MOBA with a ‘tag’ system that allows you to swap between two characters in the middle of combat, adding fresh wrinkles of strategy to an otherwise well-trodden genre. MXM’s roster features original characters (or ‘masters’) and old favourites from other NCSoft titles, such as Blade and Soul, Guild Wars 2, WildStar and more of Statesman’s colleagues from City of Heroes.