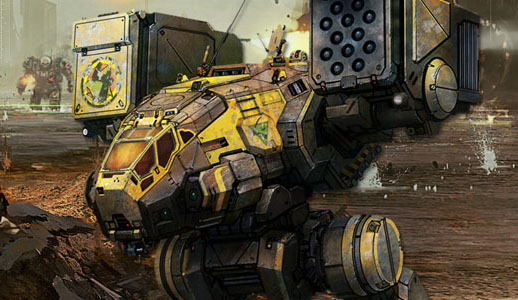 In my eyes, the Mechwarrior games were unique in finding a balance between simulation and arcade action. The combat was approachable, deep, and, if you invested time into learning its systems, complex.

The mechs themselves were simply chassis with certain defined attributes, platforms which you then built upon using many different combinations of weapons and equipment. You could make your Bushwacker adept at long range, loading it up with long range missiles and large lasers, sacrificing armour for heat sinks and missile stocks, or you could tailor it for short range combat, equipping a spread of small lasers and machine guns, piling on the armour. It was all down to how you wanted to play the game.

So, after 12 years since the fourth, and last, game in the series, for developer Piranha Games to have found that balance with their first stab at developing a Mechwarrior game is phenomenal.

You can tell that Piranha have nailed the series from the way the mechs move. These are huge walking battle tanks – the Atlas assault mech is almost 16 metres tall. They are not able to turn on a penny nor accelerate faster than a cheetah. All your movements are deliberate. That translates into the game well: large open spaces needed to be treated with caution because should you come under fire you will not be able to escape it easily, likewise closed, tight tunnels give you little room to manoeuvre in an ambush. This perfection in the movement means that you treat you mech as part of the world, not something that’s just walking on it. You watch your environment and address it.

This extends to one mechanic which stands above the others, defining the play in Mechwarrior Online: line of sight. If your team can’t see an enemy mech it may as well not exist, causing all sorts of problems for your team. Your artillery-wielding heavy mechs can’t target a mech unless someone on your team can see it and the assault mechs move so slowly that they can’t waste time searching for the enemy, else they risk arriving at a battle after it’s already lost.

See, the mechs are broken down into loose classes based on weight, light mechs through to the heaviest class the assault mech, the assault mechs can be loaded with the most weapons and armour, though this makes them extremely slow. It’s essential that light mechs act as scouts, giving the heavier mechs direction to form their attack.

Another layer to the game is the by-part damage model. Rather than an overall health value assigned to each mech that’s whittled down to zero, causing death, each hit in Mechwarrior is applied to a single part on the machine. Hit the arm, you damage the arm; destroy that arm and you destroy all the weapons that were attached to it; destroy the head or leg and you destroy the mech. The extremities are hard to hit but mastering your aim is vital to taking them down, particularly as firing directly at the enemies chest is the slowest way of taking down what is essentially a tower of metal. Heat management, too, plays a big role in Mechwarrior. Loading your mech up with lasers may give you a dominant edge in a firefight but it might cause your onboard computer to overheat and shut down, leaving you vulnerable.

All these elements play together to force players to work together. You simply can’t win a round of Mechwarrior on your own.

And that’s just scratching the surface of Mechwarrior. There’s the whole meta game also. Much like World of Tanks there’s a garage where you can buy and outfit your mechs. (These can be bought outright for cash or through earning free credits while playing.) Each mech has a weight limit and a fixed number of slots for you to equip armour, ammo, heat sinks, weapons, and equipment. This is true customisation, not the merely cosmetic options and loadout changes offered in other games. It’s possible to outfit a whole team with the same chassis but widely different internal parts.

Plus you are able to upgrade much of your equipment, both by unlocking skills with experience and purchasing upgraded models of kit – lighter, thicker armour, more effective heat sinks, say. The game’s still in beta so new features and mechs are being added every couple of weeks and I can’t say what the finished release will be like but I can’t see it straying too far from the current level of quality.

It’s been a good year for those of us who aren’t inclined to pleasures of the flesh: back in September the exceptionally goodDiaspora: Shattered Armistice showed that it was perfectly possible to make a game about compelling space combat when all the publishers seem to be interested in peddling further iterations of Medal of Duty and then, very quietly, Piranha opened the beta to Mechwarrior Online. I’m yoking the two together because they’ve done on a small-scale what many other developers can’t manage, crafting a perfect chunk of a game.

And for that they should be celebrated.

Mechwarrior Online is currently in open beta. You can sign up here.