The premise of Medieval Dynasty is simple: start as a lone survivor in the Middle Ages and become the ruler of a dynasty. However, placing it in a single category isn’t so easy. Developer Render Cube explains that “Medieval Dynasty combines the most interesting elements of several game genres,” namely simulation, strategy, survival, action-adventure, and open-world RPG, with facets from each underpinning your journey from peasant to overlord.

Bringing together many of the mechanics you’d typically expect from major titles across these genres, the project is certainly ambitious. But, done right, it could deliver the fantasy of not just ruling a Medieval kingdom, but one you’ve built from the ground up, one brick at a time. Not many games can offer that.

I took the first steps on the road to forging a dynasty in an early build. As the game’s Steam page makes clear, your character’s origins are humble: you are “a poor but skilled hunter and farmer set to take his fate into his own hands.” From there, you “start building a small outpost in the Medieval world and develop it into a bustling village.”

The survival and RPG foundations are clear from the start. You begin as this “poor but skilled” peasant, stranded in the middle of a dense forest with two dependents: your wife and son. You have nothing, really, other than the clothes on your back and a water bottle to your name, which you’ll need to fill from a nearby river as soon as you can. Starting a dynasty from scratch is thirsty work. 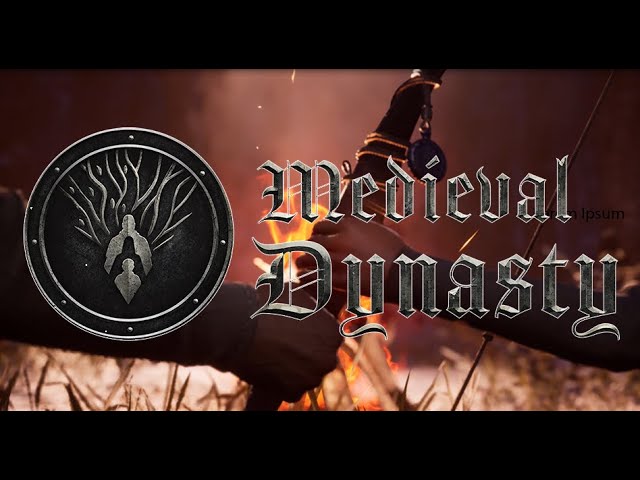 You begin with simple tasks to get your family through the night, such as sourcing and lighting firewood, and finding and cooking food – in this case, involuntarily donated by a nearby wolf. No luxury here. With a sigh of relief, I note the experience of ‘gathering’ the wolf is nowhere near as grisly as that in, say, Red Dead Redemption 2, which I’m told is a deliberate choice, as Render Cube is keen to make games that are approachable for all. Plus, in the process of making the wolf your dinner, you save a land-owning NPC from being its dinner. He’ll come in handy later.

Perhaps unsurprisingly, given Render Cube boasts developers who worked on The Witcher 3, tasks follow a similar format to those in RPG games such as CDPR’s, as well as The Elder Scrolls and Dragon Age. A simple quest log outlines your objectives, with ticks and crosses denoting successes and failures. Similarly, the in-game menus, inventory management system, and your character’s skill tree will all feel comfortably familiar for veterans of RPGs with luscious UIs, such as Skyrim or Kingdom Come: Deliverance.

The survival sim twist is that your basic needs, such as hunger, thirst, and energy, are ever-present in simple UI indicators in the bottom left of your view. Your heart beats louder as your character finds himself under stress and his life bar decreases.

From humble beginnings will a mighty kingdom flourish, or so goes the theory.

Once the initial survival tasks are complete and your family’s pulled through on a few hours’ sleep in the snow and a stomach of roast wolf, it’s time to build a proper shelter – and from these humble beginnings will a mighty kingdom flourish, or so goes the theory. Accordingly, day two of your dynastic odyssey involves heading into the forest to gather wood.

This process is akin to Stardew Valley‘s – it seems you can rinse and repeat simple harvesting actions as long as you keep your energy (and in this case, your fluids and stomach) topped up. Having cobbled together some timber, it’s time to get building. Your starting point is a single farm, offered to you by that NPC whose life you saved, albeit with a surprising degree of reluctance considering he’d be passing through a wolf’s guts by now if not for you. 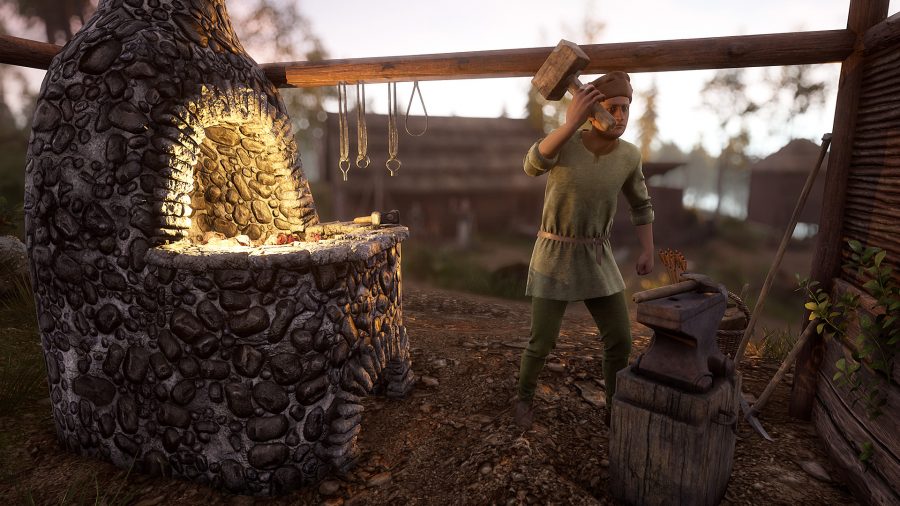 The devs draw a comparison with The Sims in how you work with (and sometimes for) NPCs to get your village “bustling”, but there’s scant similarity in the building mechanics. The first house you construct is a simple prefab, picked from a menu according to your resources, and plonked in a suitable spot in ghost form. You then simply grab a hammer, tap to put it together, et voilà: the ghost house solidifies. The same is true for the rabbit hutches and other craftables with which you’ll need to populate your village. As you progress, crafting, tasks, and resource gathering will all expand alongside you, I’m told. As you’d expect from an RPG, weapons will improve and unlock as you level up, too.

Roleplay like a boss: Here are the best RPGs on PC

Feudalism is at the heart of Medieval Dynasty, yet you occupy a rare and privileged position within it. You may be a humble peasant, but you aren’t sworn to a Lord. As such you are the head of your house and the master of a settlement in Middle Ages Europe, where “nobles and clergy rule” and “trade between the nations brings not only prosperity but also envy, distrust, and greed”, according to the game’s description. It’s the relationships you forge as you bring labourers into your fledgling kingdom, and the protection you must provide to them in turn, that will grow your settlement until it can compete on the wider stage, and thrive yet further through trade. 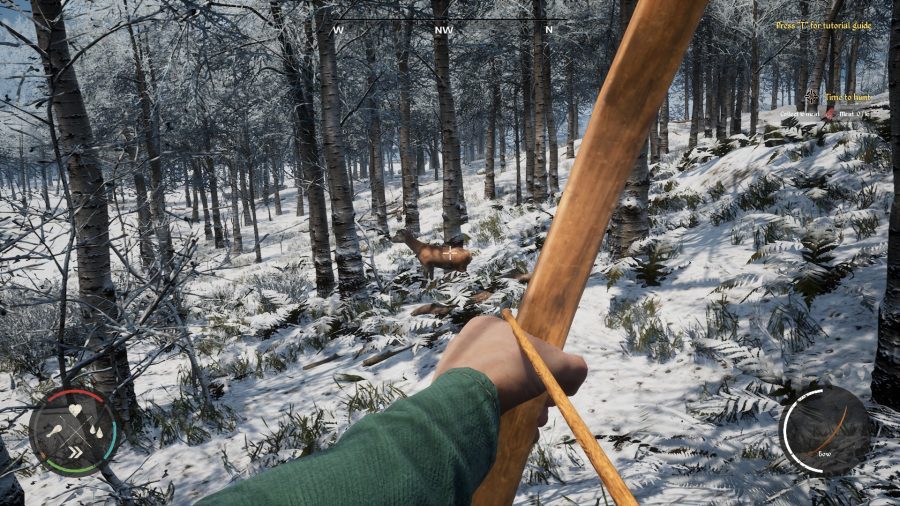 But with the demo concluding at the point of having finished my first ramshackle house, I was sadly unable to see the game scale up to crib from the strategy genre. The mechanics I did see, pertaining more to RPGs and survival sims, weren’t overly complex. Another example comes when interacting with NPCs like the grumpy wolf bait: I did have multiple dialogue choices, but from what I saw, they didn’t seem to branch out or limit others in the ways you might expect, indicating each conversation is perhaps less pressured than in many of the game’s core RPG counterparts.

This lightness of touch makes it easier to picture all these moving parts melding together, but it did leave me wondering how Medieval Dynasty will make the leap from a settlement building survival RPG of the kind we’ve seen a thousand times before – Ark, Conan Exiles, No Man’s Sky, etc – to one that incorporates a meaningful layer of kingdom management and strategy.

While there’s an economy, trade, and a “dynasty reputation system triggering events with the king”, it seems there’s no direct combat in Medieval Dynasty, indicating there’s more of an emphasis on your village’s growth than what’s going on in the wider world at any time. Seasons change and the winters are harsh; you’ll have to plan accordingly to keep your people alive. 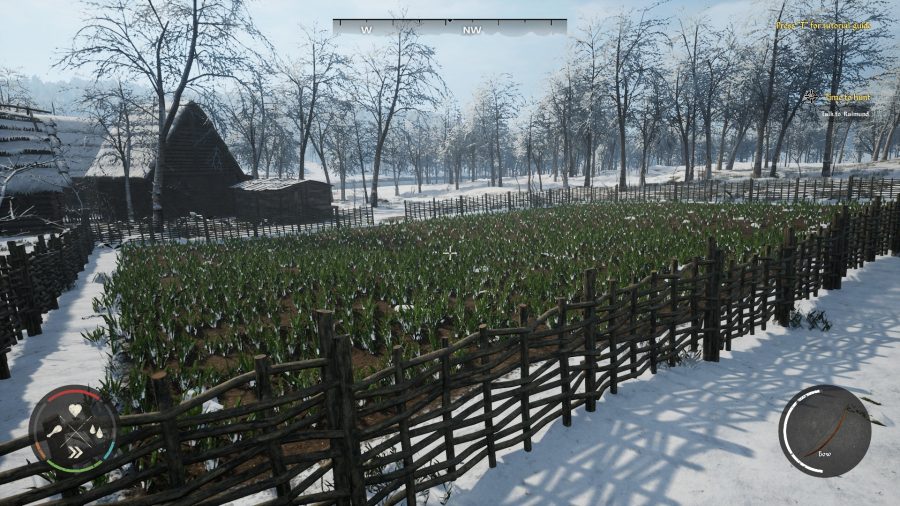 This also suggests that, whatever form the promised strategy elements take in the final game, the effect will be distinctive. Action-RPG series Mount & Blade fulfils a similar fantasy of building a kingdom from the ground up to the point where strategic and managerial decisions must be made, but they’re inseparable from conflict.

The developers are still refining certain aspects of Medieval Dynasty’s gameplay, but from the early build, it’s easy to see the appeal for RPG and sim fans. There’s a Middle Ages open world to explore, with beasts to hunt, an interactive environment to discover, caves to plunder, and “unique events and decisions with direct impact on gameplay”, as well as custom character development. There are even elements of The Sims Medieval about it, sitting happily between the core simulation and neighbourhood creation aspects of the main series, with quests, roles, progress, and a hearty dollop of the (sort of) medieval thrown in. I don’t think there’s a monster-inhabited ‘pit of judgement’ for naughty villagers in Medieval Dynasty, though.

There’s still plenty more to see before Medieval Dynasty arrives. There’s no fixed date to mark on our calendars just yet, but it’s due sometime this year.