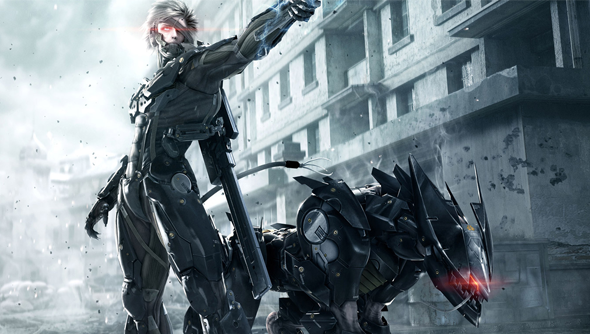 Metal Gear and the PC have been uncomfortable bedfellows for years; beyond a port of Metal Gear Solid many yonks ago none of Kojima’s famed stealth series have graced our platform of choice. Aiming to remedy some of that ill, Kojima Productions and PlatinumGames’ slice’n’dice heavy Metal Gear Rising: Revengeance is soon to come to the PC and with added goodies to reward our patience (it was originally released on consoles back in February).

Though, those goodies do suggest the developers aren’t up to scratch with what our machines are capable of.

Revengeance is wholly different from the rest of the Metal Gear games in that it throws out hallmarks of the series, like Solid Snake and stealth, replacing them with a cyborg ninja called Raiden and a katana that can cut through anything (read: hordes of soldiers and giant mechanical bosses).

The press release announcing the port boasts “The in-game technology will push the boundaries of graphics, style and lightning-speed action at a blistering 60fps on most modern PCs.” That may be impressive by console standards but that the game is being locked at 60fps, when many gaming PCs can happily run games like Battlefield 3 at more than 100fps, shows a not entirely up to date regard for the PC.

Still, pedantry aside, it’s good to see more console games receiving PC ports, particularly from developers that have a history of ignoring PCs. Just last week we learned that Castlevania: Lord of Shadows is coming to the PC, too; another series which has been noticeably missing.

There’s been no announced release date, the press release simply states that “The Windows PC version will be released digitally soon”.