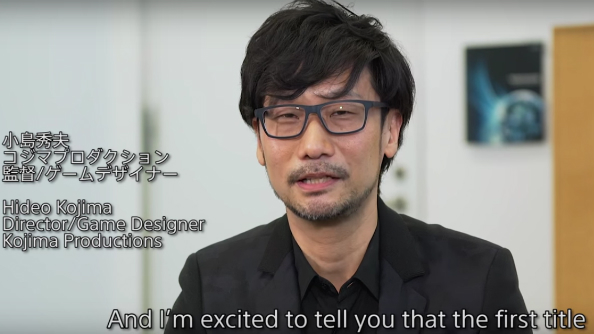 Shinkawa said he’d be overseeing art of the new game, including “characters, concepts for the backgrounds, [and] concepts for the mechs.” Mechs confirmed, I suppose. Kojima also expressed interest at rekindlind a Guillermo Del Toro collaboration, citing that he was more free to create something “edgy”, like that beard he’s now sporting.

Update 16th Dec, 2015: Sony have released a statement which clarifies the nature of Kojima Productions’ next project and its earlier reported PS4 exclusivity. Apparently it’ll be console-exclusive to PS4, but will indeed release on PC at some time after the PS4 version hits the shelves. The good times are here to stay. Here’s the telling quote from the Q&A with Kojima released in the statement:

“Q. What other platforms will Kojima’s first independent title be available on, besides PS4?
A. The title is planned to become available on PC (after PS4).”

So why are you reading about it on a PC gaming site? A few reasons. Firstly, it marks the likely end of PC production for Kojima, in the same year he finally graced our platform with his wit, idiosyncracy and stealth genre mastery in the form of Metal Gear Solid V: The Phantom Pain. For the foreseeable future, at least.

Metal Gear Solid V: The Phantom Pain is one of the best PC games of 2015, as if you were in any doubt.

Then there’s the matter of Kojima’s ongoing… well, whatever it’s been between he and Konami. It began with Kojima’s name mysteriously disappearing from MGSV’s promotional materials, continued as reports claimed Kojima Productions had been closed, took a really weird u-turn when Konami insisted Kojima was merely on holiday.

The sagacame to a head at the Video Game Awards. It was revealed there that Konami’s lawyers had prevented Kojima from attending the ceremony, at which his game won ‘best action/adventure game’ and ‘best soundtrack/score.’

Kojima tweeted the news of his departure from Konami and new relationship with Sony out to his 1.18 million followers earlier today:

The all-new Kojima Productions, which has a particularly cool logo, has a site live now too. There isn’t much on it yet, as you’d expect. In many ways it isn’t surprising to see Kojima and PlayStation buddy up, since it’s on that platform that Metal Gear Solid made many of its fans and earned its legendary status. Still, it’s disappointing news for PC gamers. All we can do is hope against hope that the PS4 exclusive they’re talking about is a timed exclusive. Right? Er, right you guys?