Yep, it’s literally a horse armour DLC story. Anyone clamoring for a substantial expansion to Kojima’s modern masterpiece will, momentarily at least, have their hopes dashed byt MGSV’s first additional content drop, detailed by Konami at the Tokyo Game Show 2015. Anyone chomping at the bit to dress up D-Horse in antiquated regalia, though, will be absolutely ecstatic.

Joining two new additional D-Horse outfits are a plethora of costumes from Metal Gear Solid 3: Snake Eater. Konami’s TGS presentation (above) revealed jungle fatigues, the sneaking suit, and the tuxedo for Snake. MGSV’s ladies will be given The Boss and EVA’s attire. 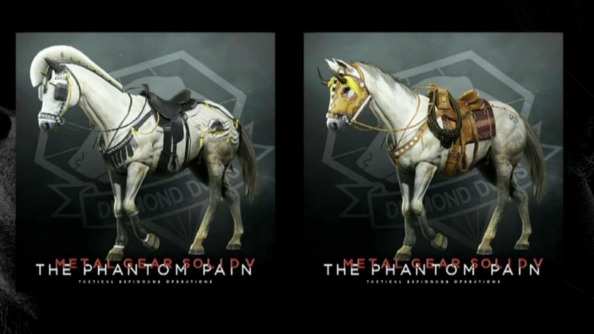 It’s a less than encouraging start to the game’s post-release phase – but things will no doubt look a bit brighter when Metal Gear Online goes live on October 6th.

If by some herculean effort you’ve done absolutely everything The Phantom Pain has to offer, there’s always the nigh-impossible-to-unlock cutscene to chase after. It’s the gift that keeps on giving. And then Fultoning away.