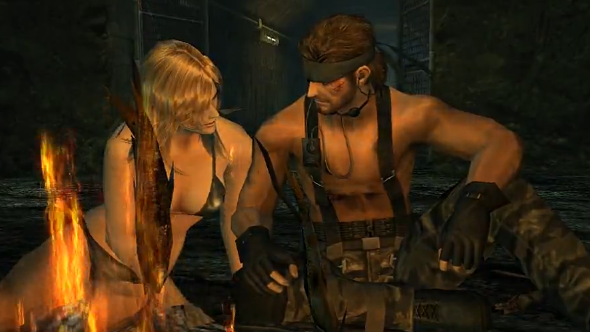 Metal Gear Survive unlocks tonight on PC, but don’t make plans to meet your soul mate because developers Konami have explicitly outlawed love in the survival MMO’s terms and conditions.

Your motor might be running but can your PC handle Metal Gear Survive? Check out the PC requirements.

Metal Gear Survive is the perfect love story. You are stabbing a gnarly zombie with a pokey stick and suddenly a beautiful, blood-stained rival grabs hold of your weapon. You look into their blood-lust driven eyes and it’s magic. Together you turn the enemy into a shish-kebab, forever cementing your bond. Unfortunately, that’s not going to happen.

According to Metal Gear Survive’s End User Licence Agreement (via Videogamer.com), you can not “seek a relationship with another person or act that Konami determines is made for the purpose of causing a relationship (including relationships, acts, and socialising limited to within the content.”

Nevermind relationships, the EULA bans hanky panky of any kind from happening, saying players cannot engage “in any act leading to meeting for the purpose of sexual or obscene acts.” There go my weekend plans.

The stipulation was found in the EULA by Twitter user, and videogames journalist, Matt Paprocki‏. Who posted a screenshot of this section of the rules.

You cannot start a relationship or campaign in Metal Gear Survive, according to the EULA. pic.twitter.com/jL1OKs5hta

The EULA does not even specify sexual relationships, but socialising of any kind, suggesting you can’t be real-life friends with the players you encounter.

Metal Gear Survive unlocks tonight, and in some cases tomorrow, on PC.